Boston jumped out to an early lead but fell victim to some timely Rays hitting and poor defense, as Tampa Bay scored five unanswered runs to secure a 5-2 win in the second of a four-game series at Fenway Park.

The loss drops the Red Sox to back to last place in the American League East by a 1/2 game.

GAME IN A WORD
Imperfect.

Henry Owens took a perfect game into the fifth inning, but things quickly unraveled from there, asÂ Owens and theÂ Red SoxÂ allowed five runs over the next four innings to dig a hole they couldn’t escape from.

IT WAS OVER WHEN…
Rays outfielder Mikie Mahtook smackedÂ a two-run home runÂ off Henry Owens in the eighth inning.

The Red Sox trailed by just one run until Mahtook deposited Owens’ offering onto the Green Monster to put Tampa Bay up 5-2.

ON THE BUMP
— Owens was lights-out early on, but he couldn’t quite finish what he started.

The rookie left-handerÂ was perfect through the first four innings, retiring the first 12 Rays batters he faced on just 38 pitches. Logan Forsythe broke up the no-no with a leadoff double in the fifth, though, and later scored on a Steven Souza sacrifice fly.

Owens ran into more trouble in the sixth, loading the bases on a walk, a hit-by-pitch and a single. The extra baserunners proved costly, as two runs came in on Evan Longoria’s sacrifice fly after Mookie Betts’ throw home from right field sailed over Blake Swihart’s head.

The 23-year-old escaped out of a no-out, bases loaded jam in the seventh but couldn’t make it through the eighth.Â Owens allowed three consecutive hits — one of which was Mahtook’s homer — and recorded an out before getting the hook in favor of reliever Matt Barnes.

Owens needed just 90 pitches to get through 7 1/3 innings, surrendering five runs (four earned) on seven hits while striking out five, walking two and hitting a batter.

— Barnes retired the last twoÂ batters in the eighth to close the book on Owens.

— Craig Breslow came on to work the ninth and allowed one hit in the scoreless frame.

IN THE BATTER’S BOX
— Travis Shaw got Boston on the board right away, ripping a single to right-center field in the first inning that scoredÂ Betts and Xander Bogaerts.

Shaw went 3-for-3 with a walk and two RBIs and continues to make his case to be an everyday presenceÂ in Boston’s lineup.

— Betts smacked a leadoff double in the first inning and added a single in the second. He now has reached base safely in a career-high 25 consecutive games.

—Â Bogaerts also enjoyed a multi-hit night, going 2-for-3 with a walk and a run scored. He doubled in the third and singled in the eighth but was thrown out at second base trying to stretch it to a double.

— The bottomÂ part of the order had a pretty rough night at the dish.

— Brock Holt entered the game in the eighth inning to pinch-hit for Josh Rutledge but struck out swinging.

TWEET OF THE GAME
The young guns took center stage at Fenway on Tuesday night.

Bottom five hitters and the starting pitcher all played for Pawtucket this season. https://t.co/Hgecx0eTKm

UP NEXT
Rick Porcello will take the mound Wednesday night as the Sox and Rays play the third contest of their four-game set at Fenway Park. He’ll go up against Tampa Bay left-hander Drew Smyly, who has allowed just one earned run over 12 innings in two starts against Boston this season. First pitch is scheduled for 7:10 p.m. ET. 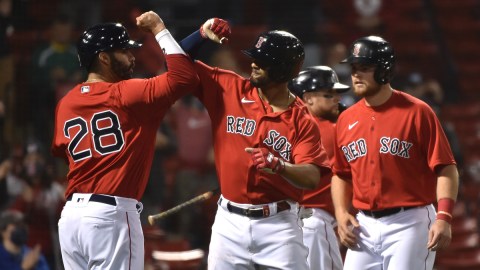 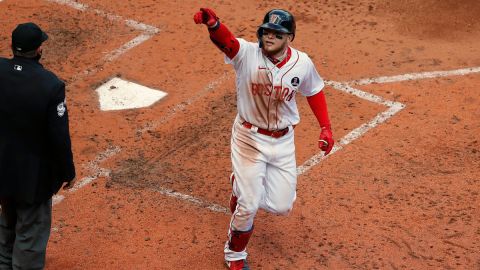 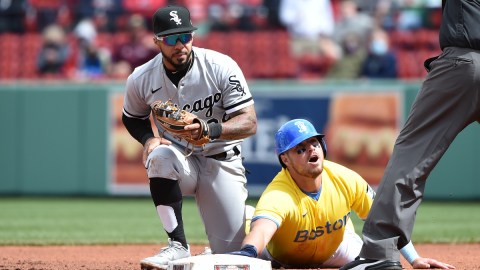