FOXBORO, Mass. — So much for those big, young, hungry Jacksonville Jaguars.

The New England Patriots treated the Jags like they were fat, old, overfed house cats Sunday, winning 51-17 to start the season 3-0.

The Patriots’ pass defense and run defense looked improved, and they had no problem moving the ball on the ground or through the air. It wasn’t a flawless performance by the Patriots, but it was darn close.

Check out which individual players shined in the drubbing.

TOM BRADY
You’d be hard pressed to find a quarterback at any level playing better than Brady right now. He completed 33 of 42 passes for 358 yards with two touchdowns — including the 400th of his career — and zero turnovers.

Brady spread the ball around, targeting nine receivers, and keyed in on his favorites, Rob Gronkowski (four catches for 101 yards) and Julian Edelman (eight grabs for 85 yards).

Brady even got Keshawn Martin involved in his Patriots debut. Martin lined up at X receiver and caught three passes for 33 yards and a touchdown.

JAMIE COLLINS
Collins’ aggressiveness at linebacker paid off against the run, helping hold the Jaguars to just 2.8 yards per carry. That will help the Patriots’ season average, since they came in allowing 5.7.

Collins also continues to shine as a pass rusher. He recorded a sack and has 3.5 on the season now. Collins is emerging as one of the best and most complete linebackers in the NFL, since he also has the speed to cover big tight ends.

LEGARRETTE BLOUNT
Dion Lewis started at running back for the Patriots and had a strong game, picking up 67 total yards on 13 touches, but Blount outproduced him with 18 carries for 78 yards and one catch for 14 yards.

Blount also was a touchdown machine Sunday, running in three of the Patriots’ six scores.

Blount barely played last week, his first after a one-game suspension. After Sunday afternoon’s matchup, it looks more like it will be a running back-by-committee for the Patriots, though Lewis continued to prove he can be counted on in all facets of the game.

DEVIN MCCOURTY
McCourty pulled in his first interception of the season and flashed his versatility, playing deep at free safety and coming down near the line of scrimmage to cover tight ends one-on-one.

That flexibility is why the Patriots gave McCourty the big bucks this offseason. The Jaguars also were in on McCourty in free agency. 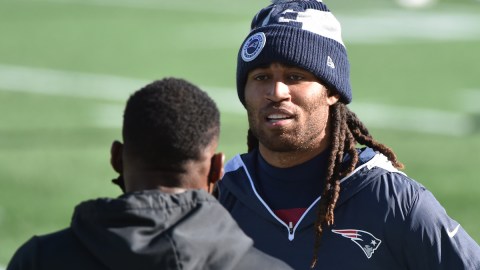