FOXBORO, Mass. — Tom Brady used his first game of the 2015 NFL season to set a couple of records.

Brady completed 19 consecutive passes at one point Thursday night in the New England Patriots’ 28-21 win over the Pittsburgh Steelers at Gillette Stadium. That set a franchise record for consecutive completions.

Brady also earned his 161st career win with the Patriots. That’s the most victories for a starting quarterback with one team in NFL history. Brady had been tied with Brett Favre, who won 160 games with the Green Bay Packers in his illustrious career.

Brady tossed four touchdown passes — three to Rob Gronkowski and one to Scott Chandler — in a brilliant performance. He completed 25 of 32 passes for 288 yards and didn’t throw an interception.

The Patriots entered the game as favorites, and it’s obvious Brady and Co. have something to prove this season after an offseason marred by Deflategate drama. But what a way for the defending Super Bowl champions — especially Brady — to kick off the new campaign on banner night at Gillette. 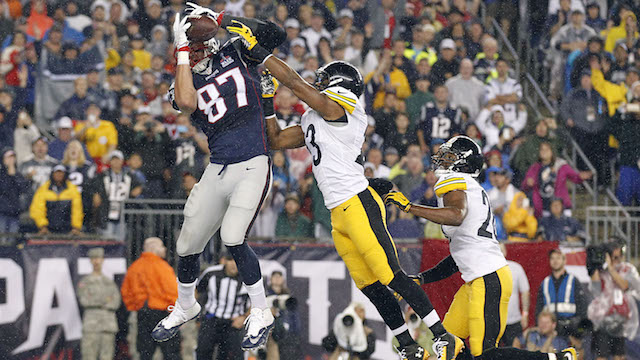