Andrew Luck is widely regarded as one of few “elite” quarterbacks in the NFL. It’s understandable if folks in New England can’t quite believe the hype, however.

The Indianapolis Colts quarterback has been downright bad in four matchups with the New England Patriots. He has just a 58.7 passer rating, completing 50.3 percent of his throws for 1,094 yards with six touchdowns and 10 interceptions.

The Patriots typically will get an early lead against the Colts, which then puts Luck in panic mode, and he forces passes that aren’t there. Luck has thrown five fourth-quarter interceptions against the Patriots, and just one pick came when New England wasn’t leading.

We’ll see if Luck’s struggles against the Patriots continue Sunday — if he even plays — but he’s already begun the 2015 season on a sour note, injuring his shoulder and completing just 56 percent of his passes with five touchdowns and seven interceptions in three games.

Check out Luck’s 10 picks, and how the Patriots defended the Colts. We’ll work backward to see the most recent plays first:

The Patriots’ defense is in Cover-1 man, and Luck targets running back Zurlon Tipton out of the backfield into the flat. Tipton has a beat on linebacker Jamie Collins, so Luck thinks he has a window in which to hit his running back. Luck’s pass is off target, and Collins makes an athletic play to pick off the Colts quarterback’s pass and turn upfield.

The Patriots again are in Cover-1 man, and Luck attempts to make a difficult 15-yard throw from the opposite hash mark to the right side of the field. The Colts bunch their wide receivers and attempt to pick Kyle Arrington, who was covering wide receiver T.Y. Hilton. Darrelle Revis sniffs out the play and picks off Luck’s lofted pass.

The Patriots stay in Cover-1 man here, but they switch up their coverage slightly with safety Devin McCourty dropping down to help out on Hilton, while Arrington drops back into zone. Luck takes a risk by targeting Revis, who’s in coverage on Reggie Wayne in the middle of the field. Revis gets his hand on the ball, which deflects directly to McCourty. Akeem Ayers also pushes Luck back into the pocket by creating pressure off the edge.

The Patriots are in a Cover-2 man under late in the fourth quarter. Luck tries to hit LaVon Brazill on a back-shoulder throw to the left sideline, but there’s miscommunication. Cornerback Alfonzo Dennard also makes a great play on the ball.

The Patriots are in prevent, and Collins shows off his special coverage skills dropping into the deep middle of the field, tracking tight end Coby Fleener. Luck’s throw was shallow to Fleener, but it was a poor, desperate decision in a 36-22 game. If the throw was on the mark, McCourty probably would have picked it off anyway.

The Patriots are in Cover-1 man, and Luck targets his fullback, Stanley Havili, out of the backfield. The ball clangs off Havili’s hands and directly to linebacker Dont’a Hightower. This turnover isn’t on Luck.

Dennard jams Brazill off the line on the left side of the field, and Luck trusts his receiver to overpower the cornerback and gain the inside track for the ball. It didn’t happen and Dennard winds up with a very impressive interception.

The Patriots are in prevent again. Luck doesn’t lead Wayne enough in the middle of the field, Arrington gets his hands on the ball, and it deflects into Tavon Wilson’s hands.

The Patriots drop into a Cover-2, and Luck doesn’t get enough oomph on his pass to the left sideline. Dennard jumps the route and takes the interception to the house.

The Patriots are in Cover-3, and Luck simply overthrows Wayne in the middle of the field, and Aqib Talib picks off the pass. The Patriots put pressure on Luck, but he had plenty of time to deliver an accurate throw. 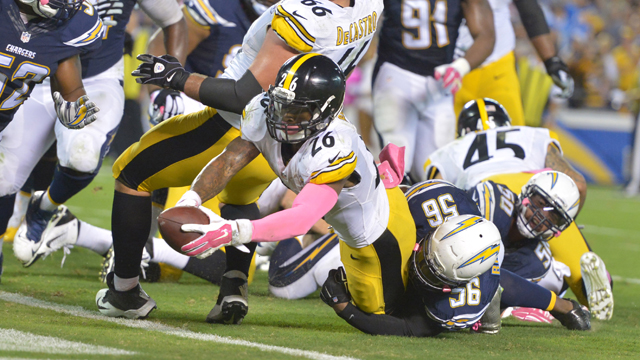