The Boston Red Sox are in the market for an ace.

It?s no surprise Boston would like to add a legitimate No. 1 starter — who wouldn?t? — but Red Sox president of baseball operations Dave Dombrowski gave his first real indication Tuesday that acquiring a pitcher to spearhead the club?s rotation will be a top priority this offseason.

?I don?t think that it?s the depth as much as you?re looking for that one guy that maybe can be your horse if you can get him,? Dombrowski said during a press conference at Fenway Park.

The Red Sox?s rotation, of course, struggled for much of 2015. It ranked 24th in Major League Baseball with a 4.39 ERA — actually not that bad considering how poorly it performed early in the season — and 20th in the bigs with a 1.33 WHIP. Adding an ace would change the complexion of the unit, especially since, as Dombrowski pointed, there is reason to believe Boston?s in-house options will improve in 2016.

?How many would I like to acquire? Well, I guess it depends who they are, first and foremost,? Dombrowski said when asked how many starters he?d like to land before Opening Day. ?I?ll start with one, and then we?ll go from there.

?But I would say that in our situation when you have (Clay) Buchholz back and feeling good, and then when you go from there, our depth and starting pitching is pretty good. I don?t think the back end of our rotation is going to be the difficult part.?

Dombrowski pointed to Rick Porcello, Wade Miley and Joe Kelly as potential options to fill the No. 3-5 spots in Boston?s rotation behind Buchholz, who the Red Sox can retain by picking up his $13 million club option for 2016. He also complimented young left-handers Henry Owens and Eduardo Rodriguez, even suggesting E-Rod could ?take that next step at any point.?

But Dombrowski, like everyone else, knows Boston simply can?t go into next season with the rotation as constituted. Fortunately for the Red Sox, there will be plenty of options available on the open market, if that?s how they look to address their obvious need.

“Again, we?ll tackle that in a couple of weeks when we sit down with our group and discuss all the names.?

Those ?names? could be intriguing. It’s time to think big. 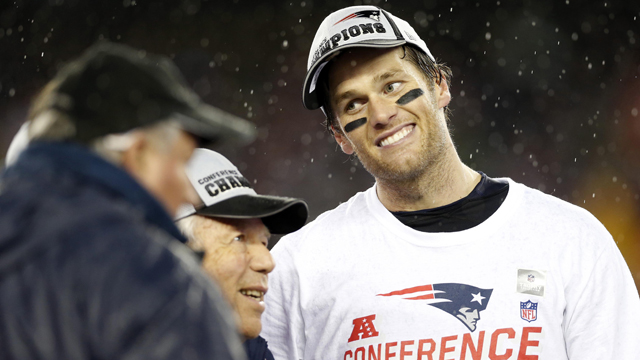 Gregg Doyel: ‘Only A Scared Team Would Cheat’ In AFC Championship Game