Final, Patriots 30-6: The Patriots held the Cowboys in the red zone, then Jimmy Garoppolo took two kneel downs to finish this game off.

The Patriots begin the season 4-0 and play the Indianapolis Colts next Sunday night.

Fourth quarter, 4:41, Patriots 30-6: Stephen Gostkowski booted through a 34-yard field goal to put the Patriots up by 24 points late in the fourth quarter.

Fourth quarter, 6:20, Patriots 27-6: Cornerback Logan Ryan just delivered the dagger with an interception. The Patriots likely will try to kill the clock to end the game.

Fourth quarter, 9:42, Patriots 27-6: The Patriots turned the ball over on downs after LeGarrette Blount couldn’t convert on a fourth-and-1 carry.

Fourth quarter, 11:03, Patriots 27-6: Jamie Collins just forced a Jason Witten fumble. Linebacker Jonathan Freeny recovered it, and the Patriots have the ball on their own 36-yard line. The turnover is under review.

Tom Brady just hit Julian Edelman on a 59-yard catch-and-run touchdown. Edelman showed off his incredible ability after the catch to run by and past defenders.

Third quarter, 1:17, Patriots 20-6: The Cowboys just took eight minutes and 31 seconds off the clock on a 15-play drive, but all they could come up with was a field goal.

Patriots safety Duron Harmon stayed down with what appeared to be an ankle injury. He walked off under his own power, though. Left tackle Nate Solder is questionable to return with an elbow injury.

Third quarter, 9:48, Patriots 20-3: The Patriots have put the pedal to the metal, and they’re not going to let off the gas for the rest of the game.

Running back Dion Lewis just caught one of the most amazing touchdowns you’ll see this year. He pulled in the passing attempt with one hand then made four defenders miss on the way to a diving touchdown.

And the blowout is on courtesy of Dion Lewis with the play of the day. Can't tackle what you can't touch. pic.twitter.com/v4QJooLkxE

Rob Gronkowski hauled in a 33-yard catch on that drive, as well.

Third quarter, 15:00, Patriots 13-3: Patriots LB Dont’a Hightower has been ruled out with an injury to the ribs.

Second quarter, 0:03, Patriots 13-3: Stephen Gostkowski scoffs at other team’s kicker issues. He just nailed a 57-yard field goal, and the Patriots will take a 10-point lead into halftime.

Second quarter, 0:59, Patriots 10-3: The Patriots forced ANOTHER three-and-out and now have another chance to score. Jabaal Sheard helped force the punt with a sack.

Second quarter, 1:20, Patriots 10-3: The Patriots only took 40 seconds off the clock, and they only managed 2 yards on the drive. Tom Brady ran for 2 yards and threw two incomplete passes. He’s just 9 of 14 for 86 yards.

Second quarter, 2:00, Patriots 10-3: Chandler Jones came this close to his first career interception. He was dropped deep into coverage, and the ball bounced off his face. As Homer Simpson would say, “D’oh!”

The Patriots forced another three-and-out, and they have the ball on their own 38-yard line.

Second quarter, 3:39, Patriots 10-3: The Patriots finally scored their first touchdown of the game nearly 27 minutes in. Tom Brady ran it in for a 1-yard QB sneak.

Julian Edelman and Dion Lewis helped the Patriots get down to the 1-yard line. A flag on Cowboys cornerback Morris Claiborne also helped.

The TD was met by a loud BRA-DY, BRA-DY chant in Dallas.

Here’s Edelman breaking Claiborne’s ankles off the line of scrimmage.

Second quarter, 6:00, 3-3: The Patriots’ defense continues to dominate. The key play of the series came when Jamie Collins drew a holding penalty on a blitz. Ronald Leary had to grab Collins, or else he would have surrendered a sack.

Second quarter, 8:39, 3-3: The Cowboys figured out how to slow down the Patriots’ offense: force Tom Brady to hold the ball.

Brady’s offensive line is collapsing, and he’s been sacked three times already. The Patriots were forced to punt, and Ryan Allen booted it 60 yards to the Cowboys’ 13-yard line.

Second quarter, 12:36, 3-3: The Patriots’ defense is dominating the Cowboys so far. They just forced another three-and-out and have allowed just 46 yards.

Second quarter, 14:06, 3-3: The Patriots had to punt after LeGarrette Blount was stuffed at the line of scrimmage. The Cowboys have the ball on their own 20-yard line.

End first quarter, 3-3: The first quarter has come to an end. The Patriots have the ball on their own 49-line and face a third and 1.

First quarter, 1:46, 3-3: The Patriots held the Cowboys to a 51-yard field goal, but Dont’a Hightower left the game with a rib injury.

Hightower remains on the sideline and is walking around gingerly.

After a long punt return from Danny Amendola, the Patriots picked up 14 yards on four plays. Greg Hardy, fresh off his four-game suspension, sacked Brady on the second play of the series.

First quarter, 10:23: Another drive, another three-and-out for the Patriots’ defense. Joseph Randle had two carries for 7 yards, then Dont’a Hightower bull rushed the running back for a third-down sack.

First quarter, 12:38: The Patriots got off to a hot start with a 21-yard completion to wide receiver Julian Edelman, then Brady threw two incompletions and was sacked on third down by linebacker Rolando McClain.

The Patriots opened the game in their base defense with Logan Ryan starting over Tarell Brown.

First quarter, 15:00: The Patriots lost the coin toss and will kick off to start the game.

4:15 p.m.: Kickoff is in 10 minutes. I’m not used to these 4 p.m. games, and the wait has seemed interminable. The Patriots just ran onto the field to a mix of cheers and boos.

Brandon King, who was just promoted from the practice squad, is officially listed as a defensive back but is warming up with the linebackers. He played linebacker in training camp. King played safety and pass rusher at Auburn after a two-year JUCO career as a safety/linebacker. He’s 6-foot-2, 218 pounds and ran a 4.49-second 40-yard dash at his pro day. He’ll mostly be used on special teams this afternoon.

Logan Ryan is lined up as the starting right cornerback over Tarell Brown during 7-on-7 drills.

3:32 p.m.: Tom Brady took the field to boos. He looks fired up coming onto the field and motioned to some Patriots fans sitting near the end zone.

3:28 p.m.: Wideouts Julian Edelman and Danny Amendola are on the field returning punts in warmups. Receivers Keshawn Martin and Matthew Slater are back for kickoffs.

Wendell practiced all week as a full participant as he recovered from an illness.

Dobson’s deactivation is interesting since LaFell still isn’t back off the PUP list. It appears Keshawn Martin’s special-teams ability has allowed him to pass Dobson on the depth chart.

Defensive tackle Akiem Hicks and rookie linebacker/safety Brandon King will make their Patriots debuts. Bostic actually was acquired by the Patriots before Hicks but will sit out.

Safety Nate Ebner is active over Wilson for the third time in four games this season.

2 p.m.: Patriots wide receiver Brandon LaFell, who’s currently on the PUP list and can’t return until Week 7, made the trip to Dallas and is warming up with strength and conditioning coaches Harold Nash and Moses Cabrera. LaFell is joined by offensive lineman Ryan Wendell and safety Tavon Wilson.

The three players are going through sprints, so it looks unlikely Wilson and Wendell will play this afternoon.

1 p.m. ET: Jerry’s World is a sea of pink early Sunday afternoon with towels covering all 80,000 seats at AT&T Stadium. One can’t help but think such a gesture, raising awareness for breast cancer, reeks of contradiction, since Dallas Cowboys defensive end Greg Hardy returns from a four-game suspension related to a domestic violence incident. Hardy also made strange comments about New England Patriots quarterback Tom Brady’s wife, model Gisele Bundchen, leading up to the two teams’ Week 5 matchup. The comments came across has shockingly tone deaf, given the circumstances of his four-game ban.

This is the first time Brady will play at AT&T Stadium, which opened in 2009. The massive stadium features a 2,100-inch video screen, which hangs from the roof. It’s just as big in person as you might imagine.

Stay here for updates and analysis leading up to and through the game. 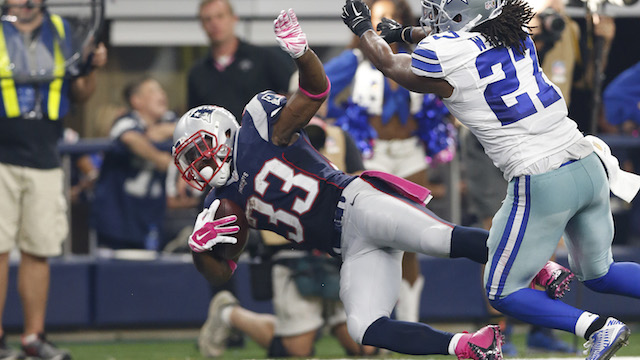