Earlier this month, Frank Vatrano’s father witnessed his son’s first point as a member of the Boston Bruins. Ray Ferraro did the same Monday night, but from a much different vantage point.

Ferraro, a 19-year NHL veteran turned broadcaster, just so happened to be assigned as TSN’s rinkside reporter for the Boston Bruins’ 4-3 shootout win over the Toronto Maple Leafs. He spent the night stationed between the benches at the Air Canada Centre, watching on as his son, Landon, skated in his Bruins debut.

The younger Ferraro, whom the Bruins had claimed off waivers from the Detroit Red Wings a day earlier, notched his first point as a Bruin — and his first of the season — when he had a hand in Boston’s third goal of the night.

The goal ultimately was credited to Brad Marchand, but Ferraro initially received credit for it, earning him an interview with none other than his old man.

?It?s something that?s pretty cool for a family to be able to have that,” Landon Ferraro told reporters after the game, as aired on “Bruins Overtime LIVE.” “I?m sure we?ll get a picture out of it or something. That?ll be something to keep for a long time.”

Ferraro finished with one assist and one shot on goal in the win, and he didn’t shy away from ribbing his dad a bit in his postgame meeting with reporters.

?It was a little bit different when you?re trying to not say something too bad,” the 24-year-old said. “Because all I could think about, he asked one question — I can?t remember what it was — but I was kind of shaking my head like, ?That was a terrible question.? I kind of wanted to say it, but I was like, ?I probably shouldn?t.? ”

The question? Ferraro asked his son if the goal was his. It wasn’t, and Landon said after the game he “had a pretty good idea” the scoring would be changed.

?I put my stick in there right about the same time it went in,” he told reporters, “but I thought I hit pad, and it went in pretty quick. So, I had a pretty good idea, but I don?t really care. I was (on the ice) for a goal for in my first game, and I got my first point of the year, so that?s what I?m happy about.”

We imagine it was a pretty happy night for the entire Ferraro family.

Let’s run through a few notes from Monday.

— Wednesday’s game likely will be another special one for Ferraro, as it comes against the Red Wings, the team that drafted him in 2009. Boston hosted Detroit on Nov. 14 at TD Garden and rode a three-goal second period to a 3-1 win.

— The Bruins’ last-ranked penalty kill was excellent against Toronto, holding the Leafs scoreless on all six of their power-play opportunities. The last of those six came in overtime and included both a highlight-reel save by Tuukka Rask and a faceoff win by winger Loui Eriksson.

?Great job there, especially Loui, who we want out there,” head coach Claude Julien said in a postgame interview with NESN’s Jack Edwards and Andy Brickley. “He?s not a natural centerman, but he won the draw, and that helped us out a lot, as well. But our PK did a great job, and obviously Tuukka, with that save there with about nine seconds (left). The game could have been over, but he allowed us to win that in the shootout.”

— In a departure from this season’s norm, Boston’s power-play unit was ineffective, managing just one shot on goal in two chances early in the second period. The Bruins led 2-0 at the time, but the Maple Leafs scored two goals just minutes later to tie the game.

“Again, not challenging the box well, and at the same time, I think we had about four shots that were blocked,” Julien said. “So, we weren?t shooting when we should have, and we were forcing shots when we shouldn?t. Power play kind of took a little bit of the wind out of us for a little while and gave them some life. Certainly, if we could have make it 3-0, it would have been a different game.”

— Patrice Bergeron assisted on Marchand’s first goal, bringing him into a tie with Adam Oates for ninth place on the Bruins’ all-time assists list.

— The win vaulted the Bruins into fourth place in the Atlantic Division and seventh in the Eastern Conference.

Video via Stanley Cup of Chowder 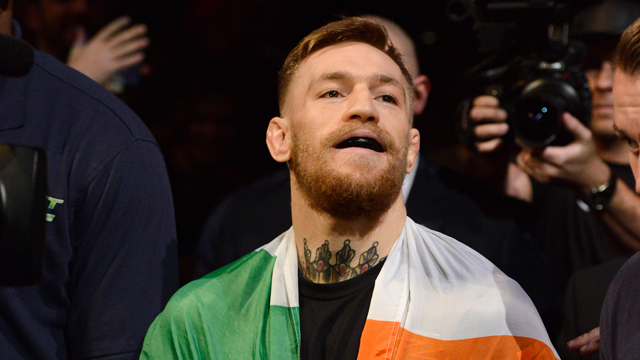 Conor McGregor Proudly Boasts About His Value To UFC: ‘I Am The Company’