ESPN's History Of Bashing Patriots Remembered With Network In Town For 'MNF' - NESN.com Skip to content

“Monday Night Football” should be interesting.

This week’s installment of ESPN’s broadcast is between the New England Patriots and Buffalo Bills and will be live from Gillette Stadium — or, as some at the network might view it, a fortress of secrets and lies.

ESPN has a recent history of painting the Patriots and head coach Bill Belichick as evil, manipulative rule-breakers among the other 31 squeaky-clean teams in the NFL. And while it remains to be seen if the network actually has a vendetta against the Patriots, it certainly seems to be its way of creating good television.

Here are some of the most recent examples of ESPN targeting New England:

Chris Mortensen deletes his false Twitter report on Deflategate.
ESPN’s Mortensen was the guy who reported on Twitter that 11 of the Patriots’ 12 balls in the 2014 AFC Championship game against the Indianapolis Colts were under-inflated. That was in January, and the Wells Report found out in May that was false. Mortensen didn’t delete the tweet until August, and even then, it took him a while to explain his actions.

An “Outside the Lines” report brings up the false Spygate report again.
Apparently ESPN’s apology didn’t get through to everyone at the network, because the false walk-through report came up again in a 10,000-word “Outside the Lines” report about Spygate a month later. As NESN.com’s Doug Kyed wrote, the report itself felt like ESPN airing out old dirty laundry with Deflategate behind it.

ESPN attempts to make a Deflategate joke on Twitter.
In Week 6, ESPN tweeted out a photo of deflated footballs telling followers to “GET PUMPED UP” for football. The Patriots were playing the Colts that week. It was dumb. 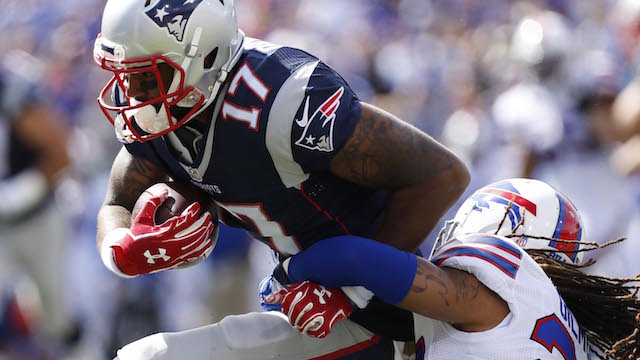