BOSTON — The Bruins watched another player skate off the ice in pain Thursday night.

Vatrano to the room after this hit in the corner pic.twitter.com/GOGTP2vGbH

Vatrano remained on the ice for a moment before skating, hunched over, to the Bruins’ bench. He immediately walked down the tunnel to the locker room.

A Massachusetts native who made his NHL debut earlier this month, Vatrano has played in five games for the Bruins this season, scoring one goal. He was called up to the big club following an injury to winger David Pastrnak, who remains out with a fractured foot.

UPDATE (11:30 p.m. ET): Vatrano did not return to the game, which the Bruins went on to win 4-2. Head coach Claude Julien after the game described the winger’s ailment as an upper body injury but declined to elaborate.

“I?m going to tell you the old same line: upper body,” the coach said. “It happens. I don?t check how severe this and that, and I guess the organization has taken the initiative of releasing more. So, you?re not going to get much out of me, unfortunately.” 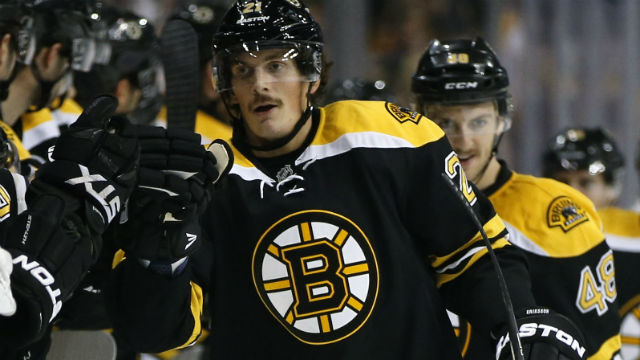