The Dallas Stars have exceeded just about every expectation entering the 2015-16 NHL season and they find themselves tied atop the league standings as a result.

The defense and goaltending have room for improvement, but any flaws in those areas have been overcome by the No. 1 scoring offense, which also includes the second-most successful power play unit.

Making the playoffs isn’t the only goal for Dallas this campaign. Winning the Stanley Cup, its first since 1999, seems to be a realistic target for this young team.

Here are this week’s NHL Power Rankings. All records current as of Nov. 19.

2. New York Rangers (14-2-2): The Rangers have won nine straight games, which has extended their lead over the Washington Capitals in the Metro division to five points.

3. Montreal Canadiens (14-3-2): Carey Price returned to practice and received a standing ovation. It’s nice to get the reigning MVP back, even if the team won the majority of its games in his absence.

4. Nashville Predators (11-3-3): The Predators keep rolling with arguably the league’s best blue line and an elite goaltender in Pekka Rinne. Second-year head coach Peter Laviolette also is getting great production from a forward group with few, if any, legitimate top-line players.

5. Washington Capitals (12-4-1): Washington ranks inside the top seven in goals scored per game, goals against per game and both power play and penalty kill percentage. That’s the sign of a well-balanced team.

6. St. Louis Blues (12-6-1): A loss Tuesday night to the last-place Columbus Blue Jackets was a shocker, but this Blues team still ranks among the league’s best with its extraordinary depth.

8. Los Angeles Kings (12-6-0): A three-game win streak is impressive, but the most encouraging part of this Kings run is their improved goal-scoring output. They’ve gone from 26th in goals scored per game to 20th in about a week.

9. New York Islanders (10-6-3): The Travis Hamonic trade request is a bit of a surprise, but Isles general manager Garth Snow has a good history of trades involving defenseman. After all, he acquired a top pairing of Johnny Boychuk and Nick Leddy not long before last season began.

10. Pittsburgh Penguins (11-7-0): Sidney Crosby still is struggling and has scored only two goals this season, but the Penguins’ offense has remained potent thanks to Evgeni Malkin’s recent production, including a four-point game in Wednesday’s win over the Wild. It’s nice to have two of the five-best centers in the league.

11. Chicago Blackhawks (11-7-1): Chicago has a three-game win streak, but it just started a very difficult six-game road trip that includes a tour through Western Canada and matchups with all three California teams. The Blackhawks are 3-5-0 on the road this season, which must improve if they’re going to avoid falling into an early hole in the Central Division standings.

12. New Jersey Devils (10-7-1): We didn’t expect New Jersey to be up this high in the power rankings at all this season, but when you give up just 2.3 goals per game and kill 83.3 percent of penalties, the victories tend to pile up.

13. Winnipeg Jets (9-9-2): A 3-6-2 record in its last 10 games and a minus-9 goal differential has raised some concerns in Winnipeg. A trade to shakeup the roster might be needed to improve the club’s chances of making back-to-back playoff appearances for the first time in franchise history.

14. Detroit Red Wings (9-8-2): Detroit has lost three of its last four games with two-plus goals scored just once in that span. It ranks 26th in scoring through 19 games.

15. Ottawa Senators (8-5-5): Ottawa’s standing in most puck-possession metrics is pretty poor, but this team continues to find ways to win.

16. San Jose Sharks (10-8-0): Three straight wins to start a six-game road trip is precisely what the Sharks needed after a stretch of eight losses in 11 games from Oct. 17 through Nov. 10.

17. Florida Panthers (8-7-3): Back-to-back wins over in-state rival Tampa Bay was an encouraging sign for a Panthers team hoping to gain some ground on the Atlantic Division leaders with a favorable upcoming schedule.

18. Tampa Bay Lightning (8-9-3): The Lightning can’t score, and they have won just three of their last 10 games as a result. Tampa’s schedule doesn’t get any easier with a Thursday night showdown against the red-hot Rangers at Madison Square Garden.

19. Vancouver Canucks (7-7-6): The Canucks are in the midst of a four-game losing steak and have seven losses in their last eight games. They are who we thought they were: a below-average team.

20. Anaheim Ducks (6-9-4): The Ducks appeared to have turned the corner after a disastrous start, but they’ve followed a four-game win streak with four losses in their last five contests and still rank dead last in goals scored per game.

21. Boston Bruins (8-8-1): Boston’s penalty unit gave up two more goals in Tuesday’s loss to the San Jose Sharks and ranks 30th in the league with a 70.8 percent success rate. It has to improve for the Bruins to go on another lengthy point streak.

22. Arizona Coyotes (9-8-1): Arizona has begun a four-game road trip with two losses and it has two more 2015 playoff teams to go with matchups in Montreal and Winnipeg.

23. Philadelphia Flyers (6-8-4): The Flyers entered the season with one of the least-talented blue lines in the league, and their problems have only become worse thanks to an offense that ranks second-to-last in goals scored per game and 25th in power-play percentage.

24. Buffalo Sabres (8-9-1): Rookie center Jack Eichel, who Sharks captain Joe Thornton recently described as “tremendous” and “powerful,” is the only reason to watch this Buffalo team.

25. Colorado Avalanche (7-10-1): Avalanche head coach Patrick Roy criticized the Corsi stat this week. That’s upsetting for Avs fans, because playing a more puck-possession game and not allowing the opponent to generate the majority of all shot attempts really would help Colorado avoid another last-place finish in the Central Division, which is where it’s headed so far.

26. Toronto Maple Leafs (6-9-4): Optimism is in the air in Toronto with the Leafs winning four of their last five games, including two over quality opponents in Dallas and Nashville.

28. Edmonton Oilers (6-12-1): Edmonton has lost five of its six games since Connor McDavid suffered a broken clavicle. The good news? The Oilers are on track to be in the mix to win the No. 1 pick again!

29. Carolina Hurricanes (6-10-2): A four-game losing skid has plummeted the Hurricanes down the standings. That’s not a bad thing, though, because this franchise needs another top-five pick to become relevant.

30. Columbus Blue Jackets (7-12-0): A season-best three-game win streak has instilled some much-needed confidence in the Blue Jackets, but they still only have 14 points, the second-fewest in the league. 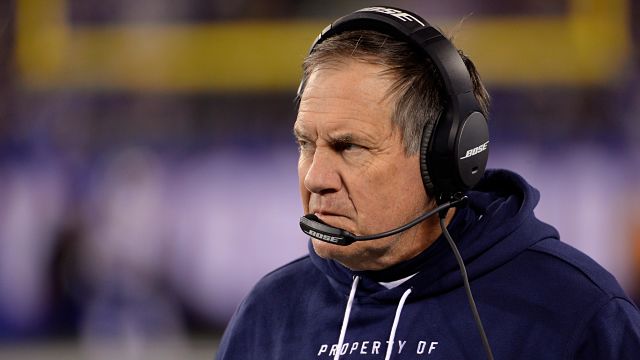 Report: Jose Fernandez Getting On Marlins’ Nerves; Could Pitcher Be Traded?