FOXBORO, Mass. — Very few players in the NFL make the kind of impact on the defensive side that Houston Texans defensive lineman J.J. Watt makes each week. He’s an absolute nightmare to block and routinely feasts on offensive linemen with his impressive quickness, hands and strength.

New England Patriots head coach Bill Belichick, who has the unenviable task of creating a game plan to stop Watt on Sunday night in Houston, gave a special amount of praise to the reigning NFL Defensive Player of the Year on Wednesday, even comparing him to an NFL legend.

“They move (Watt) around a bit. He’s not always in the same place,” Belichick said at Gillette Stadium. “Although, he plays a lot on the offensive right, defensive left, but he shows up in other spots as well. But (Texans defensive coordinator) Romeo (Crennel) has done a good job of moving things around and keeping the (other teams’) offense off-balance.

“(Watt’s) done a really good job of dealing with a lot of that stuff, the attention, whatever it happens to be, like line slides, double teams, tight ends (helping out), similar to some of the things that we saw from teams dealing with (Lawrence Taylor) in New York. He’s got that kind of disruptive (nature).”

Belichick doesn’t dish out that kind of comparison often. He’s coached a lot of great defensive players going back to his days as defensive coordinator for two Super Bowl-winning New York Giants teams in the 1980s.

Taylor, who Belichick coached for 10 years, is one of the best players in league history. Belichick’s willingness to put Watt in the same hierarchy shows how much respect the Patriots head coach has for last season’s MVP runner-up.

“I wouldn’t go above Taylor, because of the versatility that Taylor had in terms of pass coverage,” Belichick said. “He was a pass rusher and a run player, also a pass defender. He was really an elite player, including the kicking game. And of course Watt has blocked a lot of kicks, too, but I think for the position he plays, he’s as disruptive a defensive lineman I’ve seen in the league. (He’s) in the same general category as LT.”

Watt is going to be a handful for the Patriots’ offensive line, a unit that has struggled a bit to keep quarterback Tom Brady upright with 11 sacks surrendered over the last four games.

“He’s pretty special. He does a lot of things really well,” Belichick said. “Everybody game plans for him every game and he gets a lot of double teams, lines sliding to his side, teams trying to run away from him. He does a good job with all of it, despite all the attention he gets and the schemes that are put in from week to week to try and handle him. He still gives a tremendous amount of production.”

The Texans’ defense as a whole has improved mightily over the last five weeks. Houston has won four of its last five games while giving up six or fewer points in three of those victories. Watt has 7.5 sacks in that span and leads the league with 13.5 sacks this season.

If the Patriots are going to avoid a rare three-game losing streak, they’ll need the offensive line, tight ends and running backs all pitching in to slow down Watt and keep him away from Brady. 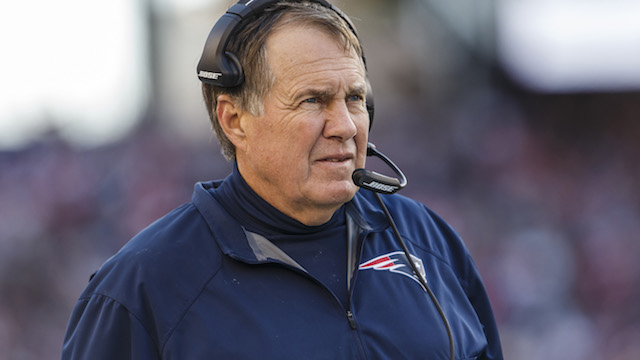 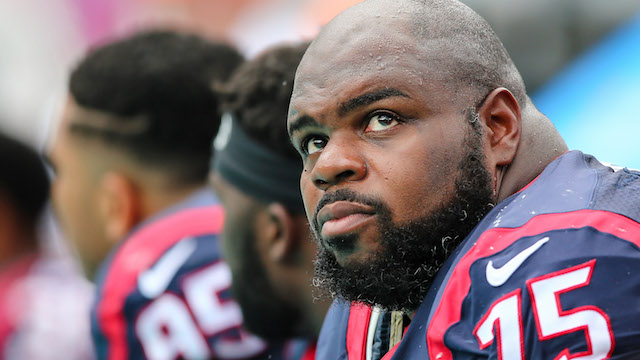