Leonard Johnson Thanks Patriots For Preparing Him For Exceptional Debut - NESN.com Skip to content

HOUSTON — It’s understandable if New England Patriots fans were saying “who?” whenever Leonard Johnson made a play Sunday night.

The cornerback was signed by the Patriots on Wednesday, practiced three times and was thrust into a starting role as the team’s nickel cornerback in their 27-6 win over the Houston Texans. He played outstandingly — exceptionally, even, given the circumstances.

Johnson allowed just one catch on three targets with two pass breakups. The lone catch he allowed was on a screen pass to Houston Texans slot receiver Cecil Shorts, and it went for negative-1 yards.

Actually, Leonard, it was better than perfect.

Johnson’s third target and second pass breakup came with 9:01 left in the third quarter, as the Patriots were leading 20-6. The Texans went for it on fourth and 4, and Johnson broke up quarterback Brian Hoyer’s pass to tight end Ryan Griffin. He wasn’t targeted again.

“Fourth-down stop was good,” Johnson said. “Any time you can get off the field on fourth down is a great thing. I give all hats off to the defensive line. They were putting pressure on the quarterback all night, which made it a lot easier on the back end for us to cover the receivers.”

Let’s put Johnson’s performance in perspective for a second. The fourth-year pro hadn’t even practiced since mid August, when he broke his ankle with the Tampa Bay Buccaneers, was forced to sit out their remaining preseason games and subsequently was placed on injured reserve.

Johnson was released Dec. 3, worked out with the Patriots last Monday, signed Tuesday and was ready to start by Sunday.

“Once I was out there, I was just able to just put myself in position just to execute the calls that was given,” Johnson said. “I don’t think I was rusty. My conditioning was a little bad, but there’s no way to get in football shape other than playing football.”

Johnson didn’t know he was going to be counted on so early and so often in his Patriots — and season — debut. The Patriots allowed just 189 total yards to the Texans and seven first downs, including one on a penalty. They allowed 102 yards passing and just a 50 percent completion percentage to Hoyer.

“I had no clue what the game plan was going to be,” Johnson said. “My job was just to come in and whatever the coaches wanted me to do, just kind of fit that role and (Sunday) play in the nickel, in the dime, some other packages. I was just excited. Excited that I had a big role in this game. I just thank the coaches and the staff for allowing me to get out after just one week of practice, to help the team.”

If fans were saying “who?” when Johnson made a play, he might have been saying the same when his teammates were coming up with key sacks and pass breakups.

“I don’t know many guys besides the two guys I played with in Tampa (running back LeGarrette Blount and practice squad fullback Joey Iosefa), but all week, the guys put their arm around me,” Johnson said. “I did some great things in practice and guys were wondering, ‘Who is this guy?’ Just felt good that I could come in and help any way I can.” 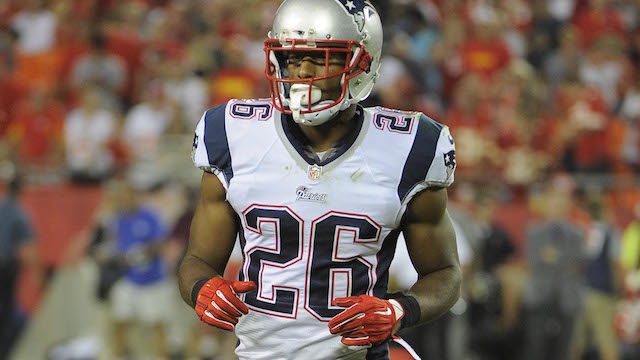