College football bowl season is approaching, and those games will give NFL fans a chance to watch the best 2016 draft prospects make their final statement to pro evaluators.

Here’s our first 2016 NFL Mock Draft of the season.

1. Tennessee Titans: Joey Bosa, DE, Ohio State
Bosa has the potential to be an elite pass rusher, and that’s the exact player the Titans need. They already have a potential franchise quarterback in Marcus Mariota.

2. Cleveland Browns: Paxton Lynch, QB Memphis
The Browns have drafted a lot of quarterbacks in the last 25 years and none of them have turned into a legit star. Might as well try until you hit a home run, right? Lynch clearly is the best of this year’s crop.

3. San Diego Chargers: Robert Nkemdiche, DT, Ole Miss
Nkemdiche would be a huge upgrade for a Chargers defense that’s struggled mightily against the run all season.

4. Baltimore Ravens: Jalen Ramsey, DB, Florida State
The Ravens need a skilled linebacker who can stop the run and handle himself in pass coverage. Ramsey can do both, and he still has plenty of room for improvement.

5. San Francisco 49ers: Jared Goff, QB, California
Goff is the second-best quarterback on the board and would be a nice fit in San Francisco. Let’s face it, Blaine Gabbert and Colin Kaepernick are not franchise quarterbacks.

6. Dallas Cowboys: Jaylon Smith, OLB, Notre Dame
The Cowboys need to replace veteran Sean Lee at some point, especially given his injury history. Smith could be the best linebacker in this draft and is a quality pass rusher.

7. Detroit Lions: Laremy Tunsil, OT, Ole Miss
Matthew Stafford has been sacked and hit way too many times this season, and the Lions’ running game also has failed to make much of an impact. The solution to both of these problems is improving the offensive line.

8. Miami Dolphins: Vernon Hargreaves, CB, Florida
The Dolphins need a shutdown cornerback to compete with the Patriots. It also would help their pass rush by giving the defensive line a little more time to get to the opposing quarterback.

9. Jacksonville Jaguars: Ronnie Stanley, OT, Notre Dame
The Jaguars need to protect quarterback Blake Bortles and open up holes for starting running back T.J. Yeldon, and their offensive line certainly could use more depth and high-end skill at the offensive tackle position.

10. St. Louis Rams: Laquon Treadwell, WR, Ole Miss
Top-rated quarterbacks Lynch and Goff won’t be available at this stage, and the Rams already have a franchise running back in Todd Gurley. It’s time to give whoever starts at quarterback next season a legitimate threat in the passing game, and Treadwell is the best receiver in this class.

11. New Orleans Saints: Tre’Davious White, CB, LSU
The Saints defense is really bad, which is why the team fired defensive coordinator Rob Ryan in November. The pass defense, and in particular the secondary, has been giving up a ton of yards. White has the potential to be a shutdown corner and makes the most sense for New Orleans with this pick.

12. Chicago Bears: Jarran Reed, DT, Alabama
The Bears defense ranks 18th in sacks and 27th in interceptions. Beefing up the interior of the line is a good place to start, as Reed can stuff the run and draw double teams, which would allow other pass rushers to have more open gaps to the opposing quarterback.

13. Tampa Bay Buccaneers: DeForest Buckner, DE, Oregon Ducks
The Buccaneers have built a solid foundation on offense with Jameis Winston at quarterback, Doug Martin at running back and Vincent Jackson and Mike Evans forming one of the better wide receiver duos. The defense is a bit behind, so adding a quality pass rusher such as Buckner makes a lot of sense here.

15. Oakland Raiders: Shaq Lawson, DE, Clemson Tigers
The Raiders have a franchise linebacker in Khalil Mack, and now it’s time to improve the defensive line. Lawson is an excellent edge rusher with impressive speed and strength.

16. Washington Redskins: Myles Jack, LB, UCLA
Jack announced he was leaving school in October, about two weeks after he suffered a season-ending knee injury. He has the potential to be a very good NFL linebacker, but his injury history is a huge concern. Washington, which ranks 25th in sacks, needs a linebacker and should pursue Jack if medical personnel clears him.

17. New York Giants: Taylor Decker, OT, Ohio State
The Giants need some young talent on their offensive line, especially given the lack of success they’ve had running the ball this season. Decker is a good pass blocker and has the size and athleticism to handle quality edge rushers.

18. Buffalo Bills: Michael Thomas, WR, Ohio State
The Bills could use another talented receiver to pair with Sammy Watkins, especially since he’s been injured so often in his career. Thomas is an excellent route runner and has the ability to make difficult catches along the sideline.

19. Houston Texans: Connor Cook, QB, Michigan State
Brian Hoyer might lead you to the playoffs from a terrible AFC South division, but not much more than that. It’s time for the Texans to draft a quarterback they can depend on long-term, and Cook is an accurate, smart and experienced passer.

20. Philadelphia Eagles: Kendall Fuller, CB, Virginia Tech
The Eagles have given up the second-most passing touchdowns in the league and the offseason signing of cornerback Byron Maxwell has not worked out. Fuller would add some solid depth and coverage skills to Philly’s secondary.

21. Indianapolis Colts: Sheldon Rankins, DT, Louisville
The Colts have given up well over 100 yards rushing per game this season, and their defensive front is losing a lot of battles at the line of scrimmage. Rankins would help address Indy’s concerns on defense.

22. New York Jets: Jayron Kearse, S, Clemson
The Jets have a good secondary, but two of its best defensive backs, Darrelle Revis and Antonio Cromartie, both are past their prime. It’s time to inject some youth and speed into this group, and Kearse is among the best safeties in this class. He’s playing a very important role for a stingy Clemson pass defense.

23. Minnesota Vikings: A’Shawn Robinson, DT, Alabama
Robinson might not drop this far, but he’s definitely worth taking if the Vikings can grab him. He’s an excellent run defender and has been well-coached at Alabama. He can step in and make an immediate impact as a rookie, which benefits a win-now team such as Minnesota.

24. Pittsburgh Steelers: Darron Lee, OLB, Ohio State
Lee is one of the most athletic linebackers in this class and an excellent tackler. His experience on special teams gives him some versatility as well. He was one of the Buckeyes’ best players in last season’s College Football Playoff, which ended with Ohio State winning the national title.

25. Kansas City Chiefs: Su’A Cravens, OLB, USC
Cravens is a versatile linebacker who’s also played safety at USC. He was a two-time All-Pac-12 selection at linebacker as well. The Chiefs need more depth at outside linebacker, and Cravens should be the best available at this stage of the first round.

26. Seattle Seahawks: Ezekiel Elliott, RB, Ohio State
The Seahawks need to find Marshawn Lynch’s successor at some point, and this would be a good time if Elliott is available. He’s been one of the best running backs in college football over the last two seasons and has the experience of playing in a lot of important games at Ohio State.

27. Green Bay Packers: Cameron Sutton, CB, Tennessee
The Packers need more playmakers in the secondary and Sutton certainly could provide that. Sutton tackles very well, in addition to being good in coverage.

29. Cincinnati Bengals: Emmanuel Ogbah, DE, Oklahoma State
Not much defense was played in the Big 12 this season, but Ogbah is an excellent pass rusher and would be a good value pick for the Bengals toward the end of the first round.

30. Arizona Cardinals: Kenny Clark, DT, UCLA
The Cardinals have a tremendous defense, primarily because of their secondary, a unit that includes talented young players such as cornerbacks Patrick Peterson and Tyrann Mathieu. Drafting a defensive tackle to improve against the run would be a smart move.

31. Carolina Panthers: Corey Coleman, WR, Baylor
There’s no guarantee Kelvin Benjamin will be a No. 1 receiver after tearing his ACL at the start of the season, and even if he does perform at that level, the Panthers could use another weapon in the passing game. Ted Ginn Jr. and Jerricho Cotchery are not the answers.

Coleman is one of the five-best receivers in this class after a tremendous season for the Baylor Bears.

32. New England Patriots
The Patriots don’t have a first-round pick because it was taken away from them as part of the punishment handed down by the NFL for Deflategate. 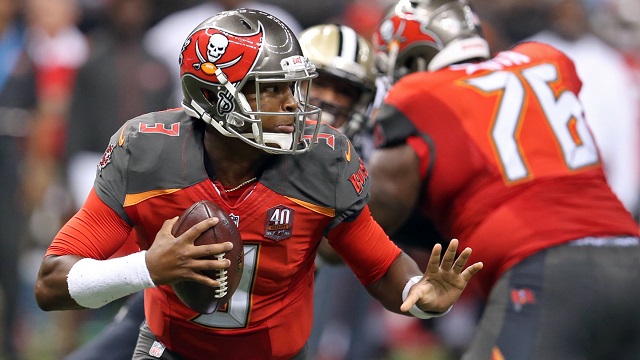 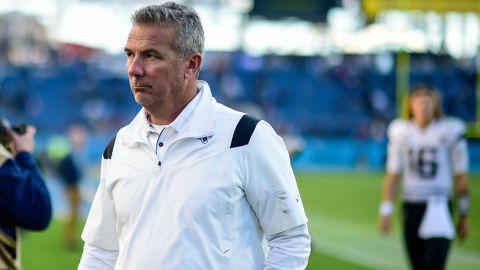