Patriots Coaches Praise Brandon Bolden After Filling In At Running Back - NESN.com Skip to content

The New England Patriots have faced their fair share of “next man up” situations this season. Brandon Bolden appears to be the latest “man.”

Starting Patriots running back LeGarrette Blount reportedly was spotted at Gillette Stadium on crutches after injuring his hip in the team’s win over the Houston Texans on Sunday. Bolden had 16 carries for 51 yards, filling in for Blount in his early-down role. Bolden has 35 carries for 110 yards on the season with 10 catches for 127 yards with two touchdowns.

“Brandon has got a real good skill set,” Patriots head coach Bill Belichick said Tuesday. “He has been a valuable guy for us on all four downs, so whether it?s carrying the ball, making tough yards, playing as a sub back and playing in the kicking game, he?s shown a lot of versatility and given us a lot of quality plays in all those situations.

“I think his skill set is really, really good. He?s got good quickness. He?s got the ability to break tackles in space with his playing strength but he also has quickness to make guys miss out there, too. He?s got good run vision, sees the holes and sees where there is space.”

Belichick singled out Bolden’s 11-yard run on third and 8 with 2:19 left in the fourth quarter.

“The play that he made at the end of the game last week in Houston was a really good cut, good play on his part,” Belichick said. “I don?t think we had the play blocked for the kind of yards he made on that play. He got six or seven yards with his vision and getting the ball into space on the cut back and probably made another four or five yards just with his running strength and balance to knock over a couple tacklers and pick up the first down.

“Probably a little over half that yardage came on his vision, his run instinct and then a few extra yards came on his physical running style and balance. I think that run is a good indication of all those things being a part of his playing style and effectiveness.”

Bolden obviously has earned the trust of his coaching staff. He’s averaged 4.3 yards per carry with 174 rushing attempts for 744 yards with six touchdowns over his four-year career since coming to the Patriots as an undrafted free agent out of Mississippi. He has 35 career catches for 298 yards with two touchdowns.

“Brandon?s a talented guy,” offensive coordinator Josh McDaniels said. “He?s had a lot of different situations come up during the course of his career here whether through injury or otherwise. He?s really done a nice job for us coming in and filling in and he?s gone over 100 yards a couple times, he?s had some big runs, he?s carried the ball in cold, sloppy weather and protected it for us as he?s matured and grown in our system.

“He?s a dependable guy. We trust him to blitz pick-up. We trust him to be in the game in those critical situations when you get a lot of different looks from the defense. He studies hard. He?s a guy that comes to work and prepares well. There?s always been a lot of talent with Brandon and his dependability and his ability to do a lot of different things within our offense has just improved with each year that he?s been here. Brandon?s a good runner and he does a lot of things that are really valuable to our football team whether it be on offense or in the kicking game. We?ll try to certainly do the best thing we can here going forward in terms of how we use him among the rest of our backs.” 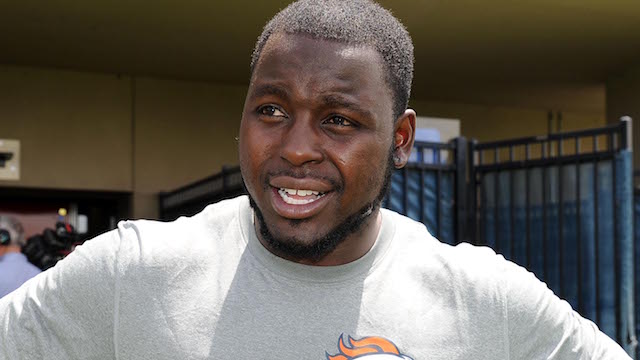