HOUSTON — The New England Patriots needed some help, but they’re back in the driver’s seat of the AFC playoff race.

Before the Patriots even took the field, the Cincinnati Bengals lost to the Pittsburgh Steelers (and lost their starting quarterback, too) and the Denver Broncos embarrassingly fell to the lowly Oakland Raiders. The Patriots then proved they’re the class of the AFC by dominating the Houston Texans in a 27-6 win, reclaiming the conference’s No. 1 seed and clinching a playoff spot.

This wasn’t a typical Patriots win, however. Their defense not only outshined their offense but also the highly lauded Texans defense. The Patriots allowed just 189 total yards and seven first downs. They let up just 102 passing yards, thanks to brilliant coverage and six sacks totaling 57 yards. The Texans averaged 4 yards per carry on 22 handoffs for 87 rushing yards.

“Those guys did a good job,” Patriots coach Bill Belichick said after the win. “We played a lot of different people. That’s what we’ve been doing along the front. Our linebackers did a good job. They had good coverage. They gave up three big plays, but on a down-in, down-out basis, I thought we competed well, tackled well. We were able to get off the field on third down, had a couple of stops when they got it down there to hold them to field goals, and then a fourth-down stop there in the third quarter.”

“I think our defense played incredibly,” quarterback Tom Brady said. “Offensively, we did enough. I think we took advantage of some opportunities and didn’t make any really big mistakes, so that was pretty important.”

The Patriots didn’t even play at full strength, as their best defensive player, Dont’a Hightower, again sat out with a knee injury. They also lost safety Devin McCourty (ankle), linebacker Jonathan Freeny (hand) and Easley (thigh) to injuries during the game. Freeny was spotted in the Patriots’ locker room with a cast on his right hand.

Sunday’s win ended the Patriots’ two-game skid and all but guaranteed them a first-round playoff bye with their 11-2 record and the Tennessee Titans, New York Jets and Miami Dolphins on the horizon. The Broncos and Bengals, both 10-3, play each other in Week 16, and Denver will face the Steelers this coming weekend. The Bengals likely will start AJ McCarron at quarterback with Andy Dalton possibly out for the season, so the Patriots are sitting pretty with three games to go in the regular season. 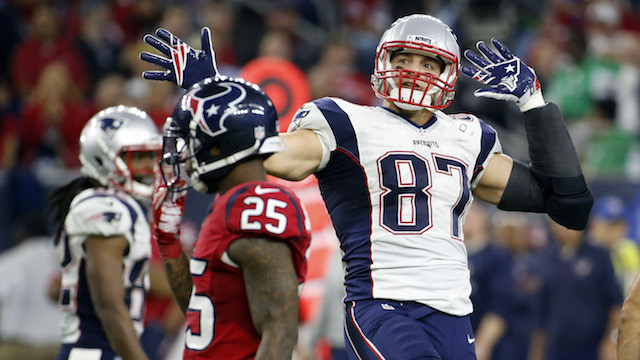 Tom Brady: Rob Gronkowski ‘Toughed It Out’ In His Return To Patriots