FOXBORO, Mass. — Vince Wilfork said he made a “business decision” this offseason when he turned down a free-agent offer from the New England Patriots to sign with the Houston Texans. Wilfork still has a lasting influence over the Patriots’ locker room, however, and insisted there are no hard feelings between him and his former team.

Some of the lessons Wilfork taught younger players in the Patriots’ locker room are more important now, coming off consecutive losses to the Denver Broncos and Philadelphia Eagles, than ever.

“He helped us a lot with understanding the couple losses we’ve had this year, understanding how to see the big picture and not to panic when things don’t go your way,” Patriots defensive tackle Selaver Siliga said Wednesday. “It may not be the situation we want, but understanding things he helped us with last year is to understand how to bounce back from it.”

Patriots head coach Bill Belichick noted Wilfork taught players not to panic in the rare instances when the going got tough in New England. Wilfork was never one to overreact and even remained calm after the Patriots lost 41-14 to the Kansas City Chiefs last September.

“Vince always had really good poise,” Belichick said Wednesday. “He had an emotional side to him, I’m not saying that. You couldn’t play the game without it, but he also had a calm and poised side, ‘OK, what do we need to do, how do we need to do it, what adjustments do we have to have make. OK, then go out there and do it without it being a big frenzy.’

“He was a very settling influence on all of his teammates just as far as that type of thing went too. He did a lot for us, he had a great career here.”

Wilfork still keeps in touch with his former teammates and continues to lead from afar.

“There are guys I’ve always talked to,” Wilfork said in a conference call Wednesday. “I talk to some of those guys once a week, sometimes twice a week or whatever it may be. I have a lot of friends in that locker room. I played football with a lot of those guys for a long time, so our relationship goes beyond football. A lot of times, we don’t even talk about football. It’s how their families are doing, how are you doing, how do you feel.

“I always try to give words of wisdom to them no matter what the situation may be, whether it’s football or family related. I always expect everybody to work towards being a leader, no matter if it’s your first year, fifth year, whatever it may be. You always have to be that leader because you never know who’s looking at you or who’s watching you day-in and day-out. You’ve got to carry yourself as a great leader, and I think over the years, we had so much in that locker room, and I’m sure they still do.”

Siliga, who, along with Malcom Brown, Alan Branch and Akiem Hicks, has taken over for Wilfork along the Patriots’ defensive line, is looking forward to seeing the former Patriots captain. Wilfork was injured when Siliga first came to the Patriots in 2013 and spent extra time with the young player on the sideline during games. Siliga has credited Wilfork with helping to turn his career around after bouncing from the San Francisco 49ers to the Denver Broncos and Seattle Seahawks before latching on with the Patriots.

“We keep in touch all the time,” Siliga siad. “It’s exciting just to go see him again. It’s been a long time. The circumstances are a little different from what they were last year. It’ll be a special moment to meet and greet him again and see him. We both understand that once the ball’s kicked off, for a couple hours, we’ll be against each other.

“He was a big influence on me, especially my game. He’s helped me tremendously (to) take the next step and stick with the football team. I give a lot of my success to him, the way he works and just the professional athlete he is on and off the field.”

Wilfork is even more focused on how his former teammates have grown off the field. 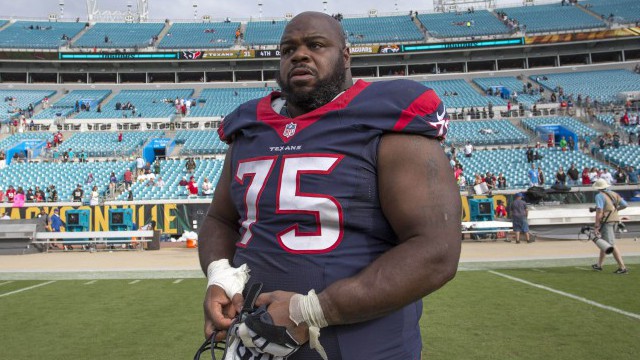