For the first time all season, the Montreal Canadiens are looking up at the Boston Bruins in the Eastern Conference standings.

The Bruins’ 4-1 win over the Buffalo Sabres on Friday night allowed them to leapfrog the idle Habs, who were the East’s top team for the first month of the season but have lost 14 of their previous 18 games.

Friday’s contest was as close to a must-win for the Bruins as a mid-January game can get. The B’s had dropped three and a row and eight of their previous 10, and a loss in Buffalo would have caused them to fall out of the playoff picture for the first time since Dec. 5.

Instead, they enter Saturday in fourth place in Atlantic Division and leading the wild-card race in the East, with the Canadiens — who have earned an identical 49 points but have played one more game than the B’s — holding wild-card spot No. 2.

Both teams have little room for error, however, as the Carolina Hurricanes, Pittsburgh Penguins, New Jersey Devils, Ottawa Senators and Philadelphia Flyers all sit within four points of the eighth seed entering the weekend.

Some additional notes from Friday’s game, which closed out a five-game road trip for the Bruins:

— After blowing a third-period lead in consecutive games, Boston reversed that trend against Buffalo, outscoring the Sabres 3-0 over the final 20 minutes.

?I didn?t really talk about blowing the lead there in the last two games. That?s the last thing you want to talk about,” Bruins coach Claude Julien said in a postgame interview with NESN’s Jack Edwards and Andy Brickley. “I just said, ?Listen, we need to go out there, we need to be playing on our toes, and we need to have the confidence and the knowledge to know that we can win this game.? I don?t want anybody going out there afraid to lose. I want guys going out there with the determination to win, and that?s all I need to see.”

— The Bruins’ penalty kill was phenomenal once again, going a perfect 4-for-4 and keeping Buffalo off the board as Boston skaters took three minor penalties during one five-minute span in the second period.

?I mean obviously, three (penalties) in a row, they?re going to get some shots,” goalie Jonas Gustavsson told reporters, as aired on “Bruins Overtime LIVE.” “But the way we worked — when you get a few in a row, you?re going to get tired as a group, and you?re going to have to keep it simple. And that?s what we did. I felt like most of the shots came from the outside. There were a couple of deflections, but other than that, we managed to keep them on the outside.”

Gustavsson enjoyed a successful night, as well, stopping 33 shots to improve to 6-1-0 on the road this season.

— Center Ryan Spooner finished with a game-high three points in the win, giving him 11 in eight games since taking over for the injured David Krejci on Boston’s second line. When asked about his success afterward, however, the 23-year-old noted that his game remains a work in progress.

“But if I?ve been helping out and it gets on the scoresheet, I guess that?s good, yeah.”

— Davis reported during the broadcast that Bruins defenseman Torey Krug had lunch Thursday with Sabres rookie Jack Eichel. The two apparently developed a friendship while playing for Team USA in the 2015 World Junior Championships.

Eichel, a North Chemlsford, Mass., native and former Boston University star, did not register a point Friday after recording a hat trick in his first meeting with his hometown team.

— During an interview with the Boston Herald’s Steve Conroy, Bruins general manager Don Sweeney said he’d ideally like to bolster his team’s inexperienced blue line by adding a puck-moving defenseman.

?(The defense) is still a work in progress, to be honest,” Sweeney told the Herald. “Obviously, Adam (McQuaid) is out now. We have nights when I think it?s OK. It?s not an easy thing to acquire. I think you have to be of a mindset to grow it. That may seem counterintuitive to a player we traded in that light (Dougie Hamilton), though circumstances may have dictated otherwise.

?But I firmly believe we have players in the pipeline and we?re going to look to continue to improve that, be it through trade, be it through free agency, or whatever way.? 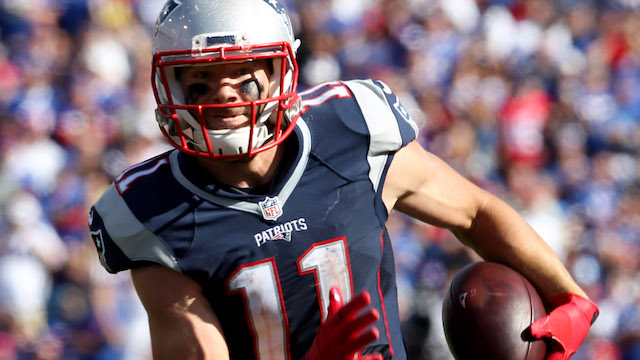