BOSTON — If anyone could have seen this coming, it was Frank Vogel.

When asked Wednesday afternoon about the Boston Celtics’ three-headed defensive unit of Marcus Smart, Avery Bradley and Jae Crowder, the Indiana Pacers head coach referred to the trio as the team’s “pitbulls.”

“The defensive pressure that their guards bring to the table is unparalleled,” Vogel said.

The Pacers found that out the hard way Wednesday night.

The C’s amazingly finished the game on a 12-0 run, a very promising development after the club had blown leads in each of their last four losses. Apparently they surprised even themselves.

“I don’t think I’ve been a part of anything like that,” Crowder said.

“That was like a video game,” point guard Isaiah Thomas added. “I’ve definitely seen it on one of those video games I play. That was crazy.”

What shouldn’t be surprising, though, is that this is a very good defensive team, especially when its three best defenders are on the floor.

Boston entered Wednesday ranked third in the NBA in defensive efficiency and was one of 11 teams holding opponents to under 100 points per game (99.6). That success starts in the backcourt, where Smart and Bradley hound opposing ballhandlers while Crowder usually is tasked with defending the opponent’s star (in Wednesday’s case, George).

Head coach Brad Stevens realizes the effectiveness of this trio and has opted for smaller lineups of late to get them all on the court at once. That’s created for interesting matchups like Tuesday’s, which saw Smart guard 7-foot-3 New York Knicks big man Kristaps Porgzingis, but Wednesday’s finish was Exhibit A of what can happen when Smart, Bradley and Crowder are at their best. 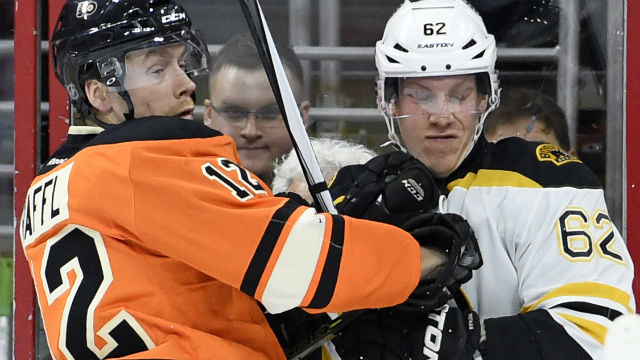 Powerball Winner Could Buy Any Of These Professional Sports Teams (Photos)