It wasn’t exactly a blowout, but the Boston Celtics restored the NBA universe to a bit more normalcy Monday night.

With Avery Bradley sidelined due to injury, head coach Brad Stevens injected Evan Turner and Kelly Olynyk into the starting lineup to shake things up after Saturday’s disappointing loss. The ploy worked, as the Celtics outscored the Brooklyn Nets by 15 points in the first quarter and essentially tread water for the remaining three frames to earn a 103-94 win at the Barclays Center.

The win snapped a two-game losing streak and earned Boston a 2-2 season series split with Brooklyn.

As usually is the case in their winning efforts, the Celtics enjoyed a very balanced offensive attack, with five different players reaching double figures. Jae Crowder had an excellent night with a career-high 25 points on 8 of 13 shooting, including two big shots down the stretch to hold off a late Nets run.

NO BRADLEY, NO PROBLEM
The Celtics broke out of their offensive slump in a big way early despite missing one of their key first quarter catalysts.

Despite the absence of Bradley, who is averaging 5.9 points in the first quarter this season, the Celtics poured in 37 points on 15 of 27 shooting in the first 12 minutes. Crowder dropped 14 points in the quarter and was part of a much more active effort for the C’s, who picked up the pace and had better ball movement after Saturday’s sluggish effort.

LOCKING DOWN LOPEZ
Brook Lopez torched the Celtics with 30 points and 13 rebounds Saturday, but a group effort locked down the Nets big man Saturday.

Lopez finished with a respectable 19 points and five boards but had just four points on 2 of 5 shooting in the first half. The Celtics effectively double-teamed the Nets center in the post and kept him from dominating possession like he did in Saturday’s win.

PAINTING THE TOWN GREEN
A big part of Boston’s offensive success was its improved presence in the paint.

The Celtics, who entered Monday averaging 43 points per game down low, outscored Brooklyn 54-40 in the paint and used sharp passing and some strong play from their big men to get easy shots.

Amir Johnson was at the center of that effort, as he enjoyed one of his best offensive games of the season with 12 points on 6 of 7 shooting.

RUN AND FUN
The Celtics had a much better time playing basketball Monday than they did Saturday or Wednesday.

Boston returned to its running roots against the Nets, racking up 16 fast break points while holding Brooklyn to just eight. Thomas shredded the Nets defense on several occasions to earn fast break layups, and after one particularly nice bucket let loose a little steam:

PLAY OF THE NIGHT
As mentioned above, the Celtics played with a lot more energy Monday night. Here’s Exhibit A, from Marcus Smart:

UP NEXT
The Celtics finally get a break from the Nets, as they’ll return home Wednesday to take on the 19-16 Detroit Pistons at TD Garden. Tipoff is scheduled for 7:30 p.m. ET.

Donald Trump: Injured Tom Brady Is Still Better Than Anyone Else 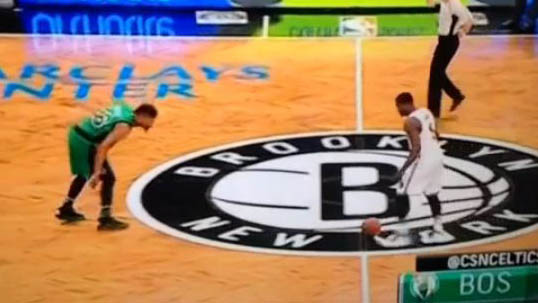