The NFL draft quickly will become the main focus of all 32 teams after the Denver Broncos and Carolina Panthers crown a new champion in Super Bowl 50.

This year’s draft is deep with quarterbacks and defensive stars, which is good news for a lot of the teams in the first half of the opening round.

Here’s our latest NFL mock draft for all 31 teams. We’ve highlighted five of these picks.

It’s clear the Chargers need a true No. 1 receiver for quarterback Philip Rivers. Antonio Gates still is a top-tier tight end, but he’s 35 years old and has battled injuries in recent seasons.

Treadwell is the top receiver in this class. At 6-foot-3 and 216 pounds, Treadwell is a speedy receiver with excellent route running, the ability to make highlight-reel catches and experience playing in the slot and outside positions. He hauled in 82 receptions for 1,153 yards and 11 touchdowns as a junior for Ole Miss.

Elliott is without question the best running back in this draft class. He ran for 1,821 yards on 6.3 yards per carry, in addition to 21 touchdowns for the Buckeyes in 2015. Elliott also displayed improved receiving skills with 27 catches for 207 yards. This would be a boom-or-bust pick for the Giants, but the potential reward is Todd Gurley-type of production.

The Rams must pair Gurley with a talented quarterback, and the best option at this stage of the draft should be Wentz. He played in just seven games because of injuries, but he posted a 62.5 completion percentage, 1,651 passing yards, 17 touchdowns and just four interceptions. Wentz has the arm strength, athleticism and accuracy that NFL teams covet.

Cook is worth a shot at this stage of the first round after a tremendous senior season at Michigan State. He threw for 3,131 yards and 24 touchdowns with seven interceptions, while leading the Spartans to the College Football Playoff with road wins over Ohio State, Michigan and Iowa.

Coleman caught 73 passes for 1,363 yards and an astounding 20 touchdowns at Baylor this season. He has good hands, runs routes well and has enough strength to get off the line of scrimmage against bigger cornerbacks. 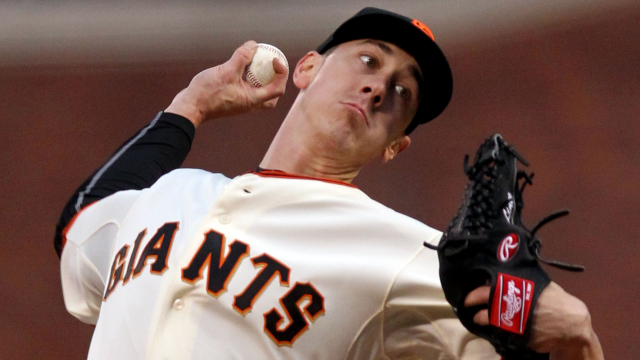