Wide receiver was just one of the New England Patriots’ offseason needs Wednesday morning. After Brandon LaFell was released in the afternoon, it became an offseason necessity.

Releasing LaFell leaves the Patriots with Julian Edelman, Danny Amendola, Keshawn Martin, Aaron Dobson, Matthew Slater and Chris Harper at wide receiver. Edelman will remain the Patriots’ “Z” receiver, and Martin is a great fourth option, but now there are question marks at the “X” and slot starting positions.

Amendola is due a $6.8 million salary cap hit, roughly $2.4 million more than than Edelman is on the books for next season. That’s an issue, since Edelman clearly is more valuable. Amendola would be helpful to have back as a slot receiver next season, but he likely needs to agree to another price cut.

Dobson, a 2013 second-round draft pick, has been inconsistent in his three years with the Patriots, so he can’t be depended upon to start. He has just 16 catches for 179 yards with no touchdowns in his past two seasons.

Sanu seems like the best fit in that group because he won’t be as pricey as Benjamin or Jones. Sanu also comes from Rutgers, which has been a Patriots pipeline, and possesses positional flexibility. He’s big enough to play the “X” but shifty enough to play in the slot or come out of the backfield.

The Patriots don’t have a first-round draft pick because of their Deflategate punishment, so the earliest they could select a receiver is with the 60th overall pick, unless they elect to trade up.

Pittsburgh’s Tyler Boyd, Colorado State’s Rashard Higgins, Rutgers’ Leonte Carroo and California’s Kenny Lawler are the top-ranked big receivers who could be available when the Patriots select. Players such as Ole Miss’ Laquon Treadwell, Ohio State’s Michael Thomas and Braxton Miller, TCU’s Josh Doctson and Notre Dame’s Will Fuller likely will be gone in what is not considered a deep class of rookie wideouts.

LaFell’s early release comes as a slight surprise, though the writing was on the wall when Martin passed him on New England’s depth chart in last season’s AFC Championship Game. LaFell never seemed to fully recover from a foot injury he suffered late in the 2014 season. He missed all of training camp and began the 2015 season on the physically unable to perform list.

It wouldn’t be a Patriots offseason without wide receiver being a top need. Now it’s just the top need. 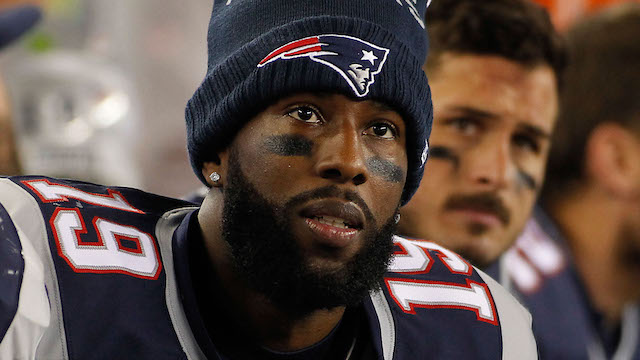 Brandon LaFell, Scott Chandler Released By Patriots After Down Seasons