BOSTON — In a marquee matchup between two of the NBA’s hottest teams, something had to give.

That’s exactly what happened Wednesday night, as the Celtics withstood the Portland Trail Blazers’ early surge before running them out of the gym in a 116-93 blowout win at TD Garden.

The Blazers, winners of 14 of 16 entering Wednesday, led 28-16 in the first quarter before Boston absolutely caught fire, outscoring Portland 61-34 over the second and third quarters to cruise to its 12th consecutive home win.

Isaiah Thomas racked up a game-high 30 points in a contest dominated by the Celtics’ starters. Jared Sullinger racked up a double-double with 15 points and 11 rebounds, while Avery Bradley added 17 and Marcus Smart stuffed the stat sheet off the bench with 15 points, 11 rebounds, three assists and two steals.

Damian Lillard (20 points) and C.J. McCollum (17 points) were Portland’s only real offense to speak of, as the Blazers managed just 60 points over the final three quarters.

STOKING THE FIRE
The Blazers proved why they’re one of the hottest teams in basketball out of the gate.

Portland made six of its first seven shots in the first quarter before cooling off down the stretch. Lillard led a balanced attack, as all five Blazers starters scored.

Yet Boston found a way to keep pace thanks to Thomas, who drove to the rim with authority and dropped 12 points in the first 12 minutes to keep the C’s within three.

PLAYING SMART
Smart was all over the place in the second quarter. The 21-year-old guard played his usual aggressive defense but also made his presence felt on the boards, tallying eight rebounds (three offensive) by halftime.

Lillard and McCollum continued to carry to Blazers, with McCollum scoring nine of Portland’s 22 second-quarter points, but the C’s closed out the frame on an 11-4 run to take a six-point lead into halftime.

OPENING THE FLOODGATES
The Celtics continued to pour it on in the third quarter. The Blazers did not.

Boston went on a monster 24-6 run to start the second half, and Sullinger led the charge, showing off some fancy moves while scoring seven of the team’s first nine points in the frame.

Sully is putting in work in the lane tonight! Here's another slick move in the paint from the big man: pic.twitter.com/hEuJFCOHL4

The Celtics dominated every aspect of the third quarter, outscoring the Blazers 30-12 in the frame. Portland, playing its fourth game in five nights, appeared to run out of gas as the game progressed and shot just 24 percent from the floor in the third, allowing Boston’s lead to balloon to 24.

START YOUR ENGINES
The Celtics’ starters were a big reason for the team’s epic turnaround.

The starting unit scored 28 of Boston’s 30 points in the third quarter, taking advantage of a sagging Blazers starting five to rack up 13 fast-break points in that frame alone.

PLAY OF THE NIGHT
The sprightly Sullinger flashed his athleticism all night and added this fancy spin-and-slam in the second quarter.

UP NEXT
The Celtics wrap up their five-game homestand Friday against Carmelo Anthony, Kristaps Porzingis and the New York Knicks, who are 2-8 in their last 10 games and were demolished by the Blazers on Tuesday. Tipoff at TD Garden is scheduled for 7:30 p.m. ET. 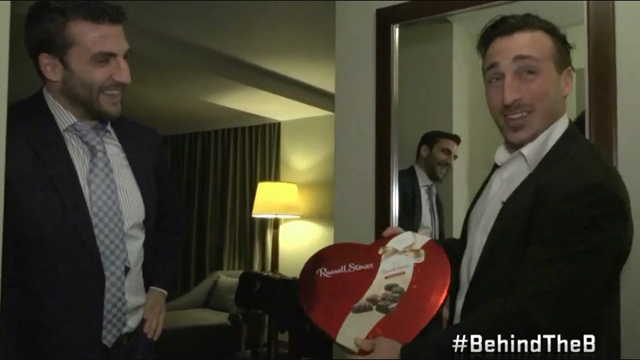 ‘Behind The B’ Episode 10: Brad Marchand Shares Valentine’s With Teammates (Video)