Blake Swihart will start at catcher for the Boston Red Sox on Opening Day, when he will continue to develop the talent that made him one of the position’s most highly rated prospects.

But there’s plenty of depth behind Swihart.

Christian Vazquez, who proved to be an excellent defensive catcher in 2014, is coming off Tommy John surgery, which forced him to miss the entire 2015 campaign. Vazquez will begin the season on the disabled list, and it’s possible he could go to Triple-A Pawtucket for a rehab assignment. Vazquez should be back in Boston at some point, though.

Veteran Ryan Hanigan will be Swihart’s backup for the time being.

Here’s a look at the Boston’s catcher situation heading into the 2016 season.

What to like: Blake Swihart’s offensive potential.
Swihart has tremendous offensive upside. He finished last season with a .274 batting average, five home runs, 31 RBIs and a .319 on-base percentage in 84 games. Swihart was particularly excellent in August and September, batting .439 and .300, respectively, to give Boston much-needed run production from the catcher position.

Swihart has the ability to hit .300 over a full season, although to do that he must improve on his .225 average against right-handed pitching in 2015. Still, the 23-year-old should give manager John Farrell a reliable bat and a guy capable of getting on base consistently at the bottom of the batting order.

2016 expectations: Swihart’s offensive talent has been noted, but he must improve defensively to be an everyday catcher long-term. The Red Sox gave up a lot of runs last season, and they cannot afford to allow opponents to consistently steal bases and get free passes on wild pitches.

Vazquez’s main goal for the season is coming back from major surgery and regaining the throwing power he displayed before the injury. Fortunately for the Red Sox, his recovery has progressed without any significant setbacks, and they can be patient with the 25-year-old given Swihart’s ability.

Hanigan is an experienced veteran and will be a great mentor for Swihart and Vazquez. He’ll also provide depth in case one of the two young catchers suffers an injury later in the season.

Prospect to watch: Austin Rei.
Rei was a third-round pick in the 2015 MLB Draft. He spent 34 games with Class-A Lowell last season, where he hit two home runs with 12 RBIs and 14 runs scored. Rei was highly ranked going into the draft as one of the better catchers in college baseball. He enjoyed a very productive career at the University of Washington. 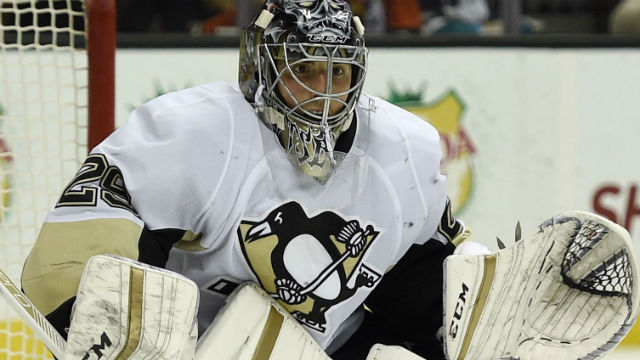 Penguins’ Marc-Andre Fleury Out Indefinitely With Second Concussion Of Season