The 2016 Stanley Cup Playoffs are less than a week old and we’ve already had many exciting, memorable and controversial moments that fans won’t soon forget.

In case you missed any of the action this weekend, let’s take a stroll through the noteworthy highlights.

Ducks and Predators Roughing Up Goalies
The Ducks were interfering with Predators netminder Pekka Rinne throughout Sunday’s Game 2 in Anaheim. Ryan Kesler was one of the main culprits, to no one’s surprise.

@FriedgeHNIC @myregularface How about when Kesler did it to Rinne? No one mentioned it then… pic.twitter.com/d3c1gE9obR

The Preds returned the favor to Ducks goalie John Gibson and, of course, noted dirty player James Neal was the man involved.

This series might have a full brawl by the time it’s over, especially if Anaheim goes down 0-3.

Ovechkin Pummels Schenn
Washington Capitals captain Alex Ovechkin is known as one of the best goal-scorers in NHL history, but he’s also a legit power forward with his ability to impact the game physically. Philadelphia Flyers center Brayden Schenn found out firsthand in Game 2.

Crazy Deflection Goal Gives Stars 1-0 Lead
Dallas Stars forward Antoine Roussel scored perhaps the strangest goal in recent playoff history. The puck went off his skate from behind the net, hit Minnesota Wild goalie Devan Dubnyk in the back of the head and went into the net. The play was reviewed, and the call of good goal stood.

Ovechkin Scores From His Spot
When are teams going to learn to not let Ovi rip it from the faceoff circle on the power play? He’s only scored a gazillion goals from that spot.

Boyle Does The Chicken Dance Taunt
Lightning forward Brian Boyle wanted to fight Red Wings forward Justin Abdelkader at the end of Sunday’s Game 3, but no punches were thrown. Boyle called out Abdelkader as he skated to the bench.

Oh No!
Flyers goalie Steve Mason gave up one of the most embarrassing goals in playoff history on a shot from the red line by Jason Chimera. 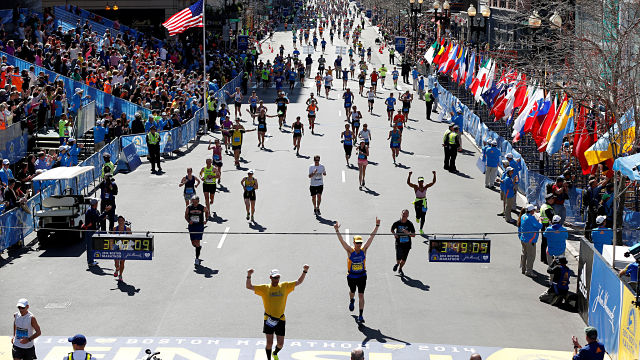 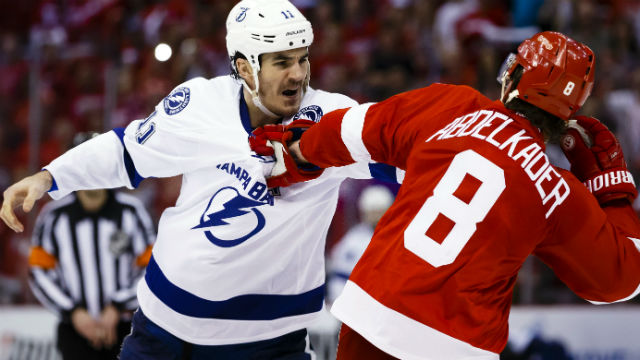