It appears David Ortiz has handpicked his successor.

The Red Sox designated hitter is in his final Major League Baseball season, and there’s no doubt he’s going to leave a hole in Boston’s lineup come 2017. But Ortiz apparently has been scouting Toronto Blue Jays third baseman Edwin Encarnacion as his replacement.

?Hell, yeah. He?s a perfect replacement,? Ortiz told WEEI’s Rob Bradford on Friday. ?Because of everything, but mostly because he can hit.?

Encarnacion has hit 35-plus home runs with 100-plus RBIs almost every year since 2012, coming just short in 2014 with 34 and 98. And while his contract talks with the Blue Jays have stalled — Encarnacion is a free agent in 2017 — he said he’s not really thinking about Ortiz’s proposition.

?I don?t know what I can say about that,? Encarnacion told Bradford. ?I just can say that the career that David has had in Boston is unbelievable and something everybody is going to remember about him. He?s had an amazing career. He looks like he?s ready, too, this year. I?m happy for him.

Encarnacion, 33, has been getting more reps at DH of late, and he told Bradford he even goes to Ortiz for advice. However, he might not be ready to give up defense just yet.

?I don?t want to be a full-time DH because I?m still young and I know I can still play good defense,? Encarnacion said. ?When I first started playing DH, the one person I asked about doing it was David Ortiz. He talked to me about it, and I learned a lot about it, because it?s not easy to just being a DH. But I don?t feel like I?m going to be a full-time DH. I feel like I can still play defense.? 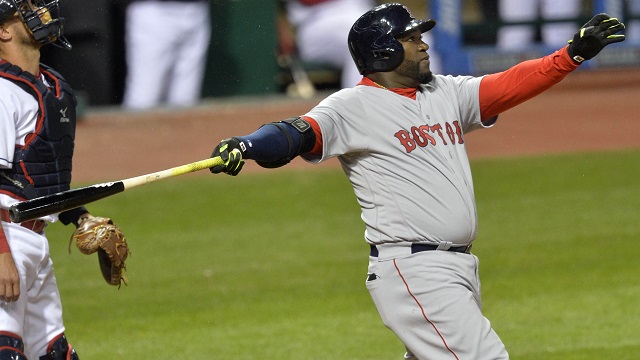