UFC 197 finally is here, and mixed-martial arts fans are in for a real treat Saturday night, with an action-packed card featuring plenty of exciting fights.

We’ll have all the results of the UFC 197 card, including round-by-round analysis of Jones-Saint Preux, below.

Interim Light Heavyweight Title Fight Commentary: Jon Jones vs. Ovince Saint Preux
Decision: Jones wins by unanimous decision, as the judges score the fight 50-44, 50-45, 50-45. He’s the interim light heavyweight champion and will face Daniel Cormier — who originally was scheduled for this fight but pulled out because of injury — to unify the title. Date and time for that fight has yet to be announced.

Round 5: Saint Preux needs a knockout to win this fight, and he has 5 minutes to get it. However, he spends the early part of the round looking for openings and either not seeing any or failing to attack. The MGM crowd doesn’t much appreciate Saint Preux’s lack of initiative and voices its displeasure. Jones tries to end things with a right uppercut, then grabs Saint Preux and slams him to the center of the octagon. Jones allows an escape by Saint Preux, who’s clearly hurt and just trying to finish the fight. Jones leans Saint Preux against the cage, then starts pounding him with elbows to no avail. This fight will be decided by the judges, who have to pick Jones as the winner, unless they saw something everyone else didn’t.

Round 4: Jones hasn’t fought in 15 months, yet he doesn’t look as tired as Saint Preux, who’s keeping his distance. That’s probably smart, as Jones stays with his attack plan of weakening Saint Preux’s base with leg kicks. Jones takes down Saint Preux with 3:30 left in the round, but Saint Preux quickly flips out of it.

.@JonnyBones gets the huge takedown but @003_OSP bounces right back up. Very competitive fight! #UFC197 https://t.co/0LW7sy2Sv8

Both fighters dance around the octagon for a minute or so, then Jones delivers two elbows before taking down Saint Preux for a second time. Jones works Saint Preux’s arms and head with some ground-and-pound, and although Saint Preux survives the nearly 2-minute onslaught, he doesn’t look long for this fight.

Round 3: Saint Preux seems to be tiring — perhaps that round-ending back-kick did the trick — and his attacks on Jones are lessened. Jones, too, is playing a long game, and the MGM crowd grows impatient with the lack of action with some mid-round rumbling. Jones responds with a left kick-right jab combo that looks worse than it is, and Saint Preux counters with a few punches of his own. Jones returns to working Saint Preux’s lower body with leg kicks. Jones senses the round ending and tries to floor Saint Preux with two kicks, but they don’t land as intended.

Round 2: Saint Preux quickly finds himself in trouble, as Jones catches a leg kick just 30 seconds into the round and doesn’t let go. Saint Preux eventually escapes, however, and then goes a bit conservative, examining Jones for an opportunity to strike. Saint Preux delivers a knee to Jones’ mid-thigh, and Jones responds with an angry slap to the head. Saint Preux seems to sense Jones’ anger and goes for the big shot, delivering one blow but missing on the follow-up. Jones lands a spinning back-kick to Saint Preux’s head as the round ends, but Saint Preux stays on his feet.

Round 1: Even though Jones is excited to be back, he doesn’t rush into the bout, feeling out Saint Preux before delivering some quick kicks to the body. Both fighters spend time in the center of the octagon, looking for openings to deliver damage but finding little, until Jones sends Saint Preux flying toward the cage 2 minutes into the round. Jones later attempts a spinning kick, but Saint Preux catches him and throws a punch. Jones stays with the kicks, but Saint Preux doesn’t seem fazed by them too much, and as the round comes to a close, it appears this fight might last longer than some anticipated.

Pre-fight: This is Jones’ first fight since his UFC 182 victory over Daniel Cormier on Jan. 3, 2015, and he looks confident in his return, strutting to the octagon at MGM. 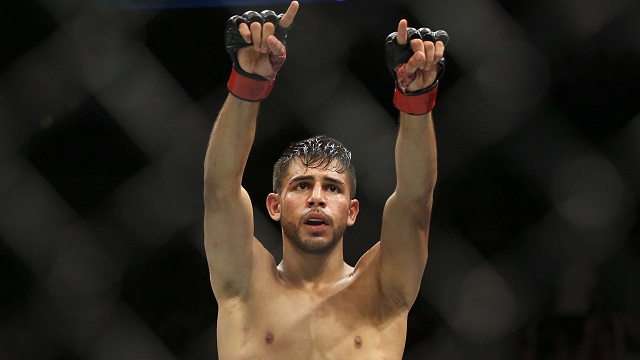 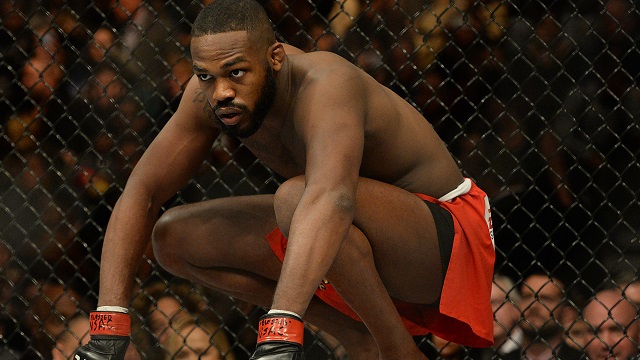