Muhammad Ali and Steve Jobs no longer are with us, yet they still managed to leave their fingerprints all over the 2016 NBA Finals.

The Cleveland Cavaliers erased a 3-1 series deficit en route to defeating the Golden State Warriors for their first NBA title in franchise history. The uphill climb took a lot of mental toughness, and LeBron James helped his team remain focused on its goal despite the long odds by referring back to both Ali and Jobs before Game 3.

The Cavs had lost Games 1 and 2 by a combined 48 points. They clearly needed some motivation as the series shifted back to Cleveland, and James spent some time watching Ali’s old fights, in awe of the legendary boxer’s perseverance, according to ESPN’s Ramona Shelburne.

“His longtime friend and adviser, Nike executive Lynn Merritt, had suggested he study the way Ali carried himself in those epic 12- and 15-round fights,” Shelburne wrote in an article published Tuesday. “The way Ali took punches, knowing his opponent would eventually tire. The way he taunted opponents, flaunting his superior skill and talents, knowing he would get into their heads.”

James is a special athlete who’s capable of digging down deep and elevating his performance to another level. Just watching Ali highlights, while helpful, probably wouldn’t have put the Cavaliers’ derailed train back on the tracks, though. And so James, sensing that his teammates needed something they could connect with, gathered everyone in the locker room before Game 3 and played a portion of Jobs’ 2005 commencement address to Stanford University.

In the speech, the Apple founder spoke of dropping out of college and how a calligraphy class ended up helping him design the fonts and interface of the first Apple computers. Jobs talked about how one can’t “connect the dots” looking forward — only backward — but that one must trust that the dots will somehow connect in his or her future.

According to Shelburne, the speech struck a chord with Cavaliers veterans Richard Jefferson and Kevin Love (and probably others, too), who ultimately hoisted the Larry O’Brien Trophy alongside James four Cleveland wins later. 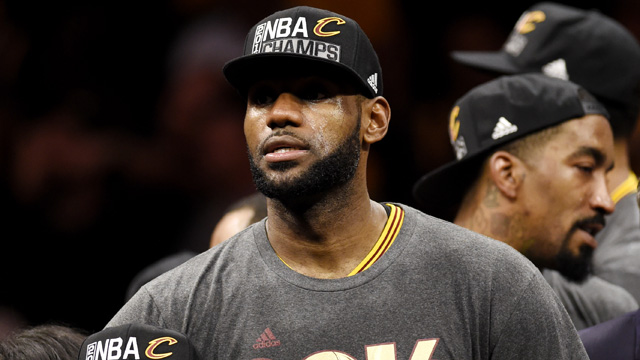