NBA Draft Rumors Live: Sixers Trying To Get No. 3 Pick From Celtics - NESN.com Skip to content

4 p.m.: Everyone’s going to be busy for the next six or seven hours, but perhaps no team’s basketball operations staff will be busier than Danny Ainge and the Celtics.

League sources say Portland trying hard to get into first round. Celtics (aka the https://t.co/DcH2s5OS60 of draft picks) open for business.

There’s also this. The Oklahoma City Thunder might be looking to move Serge Ibaka, who could be a huge get for any team looking to improve its frontcourt.

The Thunder is shopping big man Serge Ibaka on this draft day, a source said. https://t.co/obBwkWDf6F

2:08 p.m.: Well, it’s not a blockbuster, but it is a trade. The Nets reportedly dealt Thaddeus Young after all.

Brooklyn has traded forward Thad Young to the Indiana Pacers for the 20th pick and a future 2nd rounder, league sources tell @TheVertical.

1:05 p.m.: The Nets reportedly told forward Thaddeus Young he’s on the trading block. Brooklyn is looking for a first-round pick, as the Celtics own theirs in this year’s draft.

Thaddeus Young has been informed the Brooklyn Nets are shopping him around the league in search of a 1st round pick, according to a source.

And speaking of that Celtics pick, it’s looking like a lot of teams want it.

The Sixers, Timberwolves and Pelicans are all enamored with Kris Dunn, per sources. If Boston picks him at No. 3, expect a trade to follow.

12:30 p.m.: It sure sounds like the Boston Celtics are starting to get busy, and there’s no shortage of interest in that third pick, at least according to a report from ESPN’s Jeff Goodman.

Celtics fielding calls for the No. 3 pick ? and the majority of the teams interested to take Kris Dunn, sources told ESPN.

It probably goes without saying, but it’s worth questioning each and every report like this. Not because there’s reason to question these reporters — just about all of them have proven track records — but because there’s something to be said for getting your message out there in order to build leverage.

With that said, here’s the latest from The Vertical’s Adrian Wojnarowski.

Kris Dunn has significant traction in Boston as No. 3 pick, sources tell @TheVertical. No final decision — and trades remain on table.

All of sudden, there’s plenty of interest in a draft pick that the Celtics, according Wojnarowski’s tweet, sound like they’re willing to make. Hmmm …

12:05 p.m.: Another big move might be in the works, and it involves the Boston Celtics.

League sources tell @chadfordinsider and me: Philadelphia is ramping up its efforts to acquire tonight's No. 3 overall pick from Boston.

If Philly is successful prying the No. 3 pick from Boston, it'll enable the Sixers to choose between Buddy Hield, Kris Dunn or Jamal Murray

10:59 a.m.: It looks as though the Phoenix Suns are trying to make some big moves, per ESPN’s Marc Stein.

9:53 a.m.: Well, here’s a very curious rumor about Thon Maker from Sports Illustrated’s Jake Fischer. The 19-year-old from Sudan already was an interesting pick after taking a fifth year of high school to skirt the NBA’s age rule and enter the draft. But apparently some teams don’t think he’s actually 19.

Several teams have entirely ruled Thon Maker out of the first round due to his age. Multiple sources believe Maker to be 21-23, not 19.

Fischer also had some news about the Celtics, who reportedly are actively shopping the No. 3 pick.

The 2016 NBA Draft begins at 7 p.m. ET at Barclays Center in Brooklyn on Thursday, but the rumor mill will be turning all day. And expect plenty, because beyond the Nos. 1 and 2 picks — the Philadelphia 76ers and Los Angeles Lakers are expected to take LSU’s Ben Simmons and Duke’s Brandon Ingram, respectively — there are quite a few mysteries.

No one seems to know, for example, whether the Boston Celtics will make their No. 3 pick or trade it to the highest bidder. And given that a blockbuster trade already happened Wednesday with the Chicago Bulls sending Derrick Rose to the New York Knicks, there should be plenty more where that came from.

We’ll be filling you in on all the goings-on around the NBA on Thursday, so keep it right here for more updates.

In fact, here are a couple of teams that reportedly already are looking to make moves before the draft.

Sources: Several Western teams aggressive on Thad Young, whom Brooklyn's working to move to highest bidder. This gets Nets into first-round. 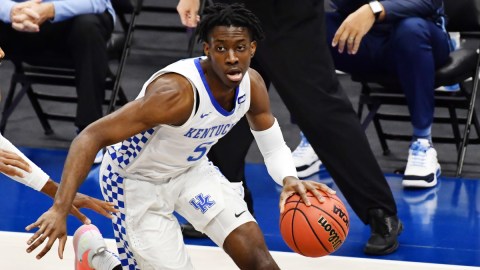