The 2016 Major League Baseball All-Star Game is nearly here, and the American League will be sending a pretty impressive squad to the diamond.

The AL will face off against the National League on Tuesday with home-field advantage in the World Series on the line, and the NL’s pitchers are going to be tough to crack. However, the AL is absolutely loaded with heavy hitters, which should make for a fun game to watch.

In fact, the AL has so many quality batters that it’s hard to decide which players on the team are the best of them all. But lucky for you, we gave it a shot. So without further ado, here are the player rankings for the 2016 AL All-Star team.

1. Jose Altuve (2B, Houston Astros): Altuve is a ridiculous human being. The 5-foot-5 Astros second baseman leads the AL with a .341 average and 119 hits, has the second-most stolen bases in the AL with 23 and has 24 doubles, 14 home runs, 41 walks and 67 runs to his name. Altuve also happens to be a great second baseman, making him the pretty clear leader of this pack.

2. David Ortiz (DH, Boston Red Sox): The only reason Ortiz isn’t No. 1 on this list is because of Altuve’s stellar defense. The Red Sox slugger is having a career year in his final season, batting .332 with an AL-leading 1.107 OPS and 34 doubles. Big Papi also has 22 homers and 72 RBIs in fewer at-bats than Altuve, making him not only a contender for No. 1 on this squad but for the AL MVP, as well.

3. Mike Trout (OF, Los Angeles Angels): At this rate, Trout might never miss an All-Star Game in his career. The Angels center fielder is a five-time All-Star at just 24 years old, as he’s made the team every year since his rookie season in 2012. He also was Rookie of the Year that season, has won the Silver Slugger each year and has finished in the top two of MVP voting, winning in 2014. So, yeah, Mike Trout is really good at baseball.

4. Chris Sale (SP, Chicago White Sox): AL skipper Ned Yost named Sale starter Monday and for good reason. The White Sox ace was roughed up in his last start before the break, ballooning his ERA to 3.38 — yes, that counts as ballooning for Sale — but his 14 wins and 125 innings are the most in the AL. He also has the most strikeouts (123) of all the pitchers on the AL team.

5. Xander Bogaerts (SS, Red Sox): Bogaerts was snubbed in last year’s mid-summer classic, but he beat out the other AL shortstops by a mile this season. The Red Sox infielder trails only Altuve with 117 hits and already looks to be the clear winner for the Silver Slugger halfway through the season.

6. Corey Kluber (SP, Cleveland Indians): Kluber’s 9-8 record and 3.61 ERA are deceiving, as the Indians ace had a rough start to the season, but he’s been mowing batters down to the tune of 122 strikeouts since then. The 2014 Cy Young Award winner still is one of the best pitchers in the AL, and he, Sale and knuckleballer Steven Wright are the only AL pitchers with three complete games already.

7. Steven Wright (SP, Red Sox): Speaking of Wright, he’s been perhaps more deserving of the Red Sox’s “ace” title than David Price so far. His 2.68 ERA is the best in the AL, and although his knuckleball doesn’t help him put up flashy numbers, it’s been embarrassing opposing batters all season.

8. Jose Quintana (SP, White Sox): Quintana and Sale are one of the best 1-2 punches among American League rotations. While Sale is the star of the White Sox’s starters, Quintana isn’t far behind. As of now, his 3.21 ERA and 3.48 FIP (fielding independent pitching) actually are better than Sale’s.

9. Mookie Betts (OF, Red Sox): Betts joins a slew of young Red Sox making their first All-Star appearances. The right fielder has been tearing the cover off the ball this season with a .304 average, 117 hits, 59 RBIs, 23 doubles and four triples. Betts also already matched his 2015 home run total halfway through the season with 18.

10. Josh Donaldson (3B, Toronto Blue Jays): Donaldson has the edge over Manny Machado among third basemen, but you honestly could flip a coin to decide where to rank them and be right either way. Donaldson and Machado are neck and neck in nearly every offensive category, but Donaldson pulls away in runs (80 for Donaldson, 62 for Machado), RBIs (63, 53), OPS (1.017, .944) and triples (5, 0). Otherwise, they both play stellar defense and are all-around great players.

12. Ian Desmond (OF, Texas Rangers): Desmond has been crushing it for the Rangers this season, compiling a .322 average with 113 hits, 65 runs, 22 doubles, 10 homers and 56 RBIs. Not to mention, he’s doing it all after switching from shortstop to center field, making his season even more impressive.

13. Robinson Cano (2B, Seattle Mariners): As a second baseman, the Red Sox’s Dustin Pedroia would have the backup role easily, but it’s Cano’s bat that sets him apart. With a .313 average and 114 hits, Cano is putting the ball in play consistently, and he also happens to be sending it out of the park with 21 home runs.

14. Francisco Lindor (SS, Indians): The battle for MLB’s best shortstop likely will be between Bogaerts and Lindor for years to come. Bogaerts has Lindor beat in nearly every offensive category, but so far, he’s a better fielder than the Red Sox star.

15. Dellin Betances (RP, New York Yankees): The Yankees bullpen is fear-inducing for batters, and a big part of that is Betances’ 15.95 strikeouts per nine innings. Seriously, the reliever’s 78 strikeouts are more than some starters, including Matt Harvey, CC Sabathia, Sonny Gray and Yordano Ventura, to name a few.

16. Aaron Sanchez (RP, Blue Jays): Sanchez is on the roster in the bullpen, but he actually hasn’t made a single relief appearance in 2016. However, he has been an excellent starter for the Jays with a 9-1 record, 2.97 ERA and 103 strikeouts.

18. Michael Saunders (OF, Blue Jays): Saunders won the final fan vote, but he easily could have made the starting nine. He’s the best left fielder on the list, and he’s been producing consistently for the Blue Jays with a .298 average. Saunders does strike out a lot, however, and already has 92 on the season.

19. Eduardo Nunez (SS, Minnesota Twins): As a guy who can play third base, shortstop and left field, Nunez sounds like a utility man but he plays like an everyday starter. Despite a .321 average, Nunez somehow has been flying under the radar (probably because the Twins stink).

20. Miguel Cabrera (1B, Detroit Tigers): Cabrera should have beaten Eric Hosmer for the starting first base job, but that’s Kansas City Royals fans for you. The 11-time All-Star, six-time Silver Slugger and two-time MVP is still the same old Miggy, even if he’s batting .293 instead of over .300.

21. Andrew Miller (RP, Yankees): Miller isn’t even a full step below Betances if you’re rating Yankees relievers. The lefty strikes out almost as many batters as his teammate and has a 1.37 ERA and 0.71 WHIP to go with it.

22. Cole Hamels (SP, Rangers): Hamels has provided consistency to an otherwise not-so-consistent Rangers rotation. The lefty’s 9-2 record, 3.21 ERA and 109 strikeouts have helped lead the Rangers to the best record in the AL.

24. Brad Brach (RP, Orioles): The Orioles have somewhat of a monopoly on relievers no one can hit. Brach boasts a 9-1 record, a 0.91 ERA and batters are getting even fewer hits off him, as his .155 BAA shows.

25. Eric Hosmer (1B, Kansas City Royals): Cabrera is slightly better than Hosmer, but the Royals first baseman is no slouch. Hosmer is batting .299 with 13 home runs and 49 RBIs in a field of first baseman that pretty much consists of him, Cabrera and everyone else in the AL.

28. Mark Trumbo (OF, Orioles): Trumbo is the home run king so far, with 28 dingers to his name. However, the Orioles outfielder also has 99 strikeouts, and his .288 average is low for this group.

29. Salvador Perez (C, Royals): Perez is a great player, and he was basically an automatic All-Star, given the state of the American League’s catching. He’s not the best hitter of this elite bunch, but he’s actually a good catcher, which already gives him a huge head start on every other backstop in the AL.

30. Kelvin Herrera (RP, Royals): The AL’s list of relievers actually is a solid bunch, and Herrera is no different. The Royals righty has a 1.77 ERA and has walked just seven batters in 40 2/3 innings.

31. Will Harris (RP, Astros): Harris has turned his career around in Houston, and this is the 31-year-old’s first All-Star Game. Harris has a 1.62 ERA to go with 39 strikeouts in 39 innings.

32. Alex Colome (RP, Tampa Bay Rays): Colome also is a first-timer in this year’s game, as well as being the Rays’ only representative. The Dominican Republic native can keep up with the rest of the AL’s relievers with a 1.69 ERA, but he walks 3.1 batters per nine innings.

33. Stephen Vogt (C, Oakland Athletics): Remember what we said about catchers in the AL? Yeah, well, that’s how Vogt is here. He’s not a bad player by any means, but his .277 average, seven home runs and 27 RBIs certainly don’t live up to the rest of this crew. 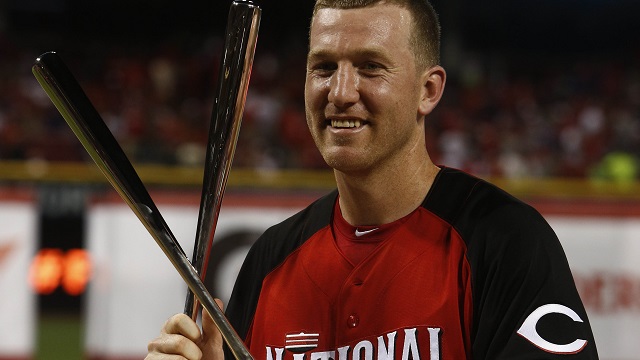 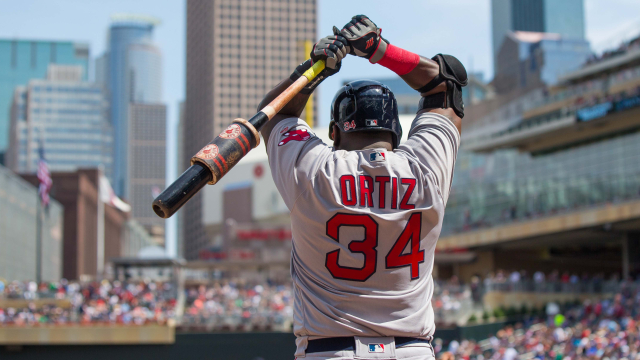