Braheim is a 12-year-old Little Leaguer from the Philadelphia area who plays for the Taney Dragons. He recently celebrated a birthday, and his father, Devon, let him think he wasn’t getting birthday presents.

His birthday just happened to fall on the day of a Little League game, which worked out perfectly for Devon’s master plan. An understandably bummed-out Braheim got into the van to go to his game, still thinking it was a lost birthday.

That’s when his father, rolling the video camera on his phone, started to unveil a terrific birthday surprise: a brand-new baseball bat.

“[His reaction] definitely surprised me,” the elder Fowler told NBC 10 in Philadelphia. “I was expecting him to be happy but I didn’t expect him to get so emotional.”

Making the moment even more special is the fact that Fowler’s currently unemployed, but he still found a way to get his son the present he wanted.

“Just keep trying to make your kid happy,” Fowler said. “If you got love for your kids they won’t care about what you get them.” 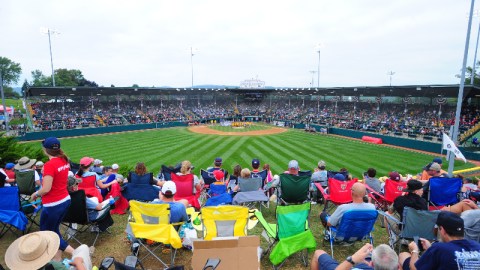