Elliotte Friedman of Sportsnet was the first to report the terms of the contract, which initially was reported as a one-year deal. The Bruins later confirmed the details of the contract.

Backes, a captain in St. Louis, is a big-bodied, physical forward who can play both center and right wing. He played in 79 games for the Bruins last season, tallying 21 goals and 24 assists for a team that fell two wins short of the Stanley Cup Final.

The 32-year-old has been a 20-plus-goal scorer for much of his career, with his most productive season coming in 2010-11 (31 goals, 31 assists). His contract carries the same average annual value as the one former Bruins winger Loui Eriksson reportedly signed with the Vancouver Canucks.

Eriksson, who spent the last three seasons in Boston, inked a six-year, $36 million deal with Vancouver shortly after the market opened Friday, according to multiple reports.

UPDATE (12:59 p.m. ET): Shortly after news of the signing broke, Backes posted a lengthy note on Twitter thanking Blues fans for their support over his 10 seasons in St. Louis. He also confirmed the signing in an interview with TSN.

A great mixture of emotions and thankful for an amazing decade of my life! Farewell @StLouisBlues #BleedBlue pic.twitter.com/AyYSSOqj06 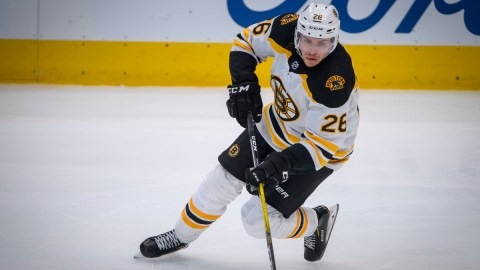