First, light heavyweights Andrew Sanchez and Khalil Rountree and strawweights Amanda Cooper and Tatiana Suarez will fight each other for UFC contracts in the 23rd Ultimate Fighter Finale. Then their coaches, Joanna Jedrzejczyk and Claudia Gadelha, will meet in the octagon with the women’s strawweight championship on the line in a five-round bout. Jedrzejczyk’s first win over Gadelha in 2014 was controversial, but she wants to leave no doubt who’s best this time.

NESN.com will be octagon-side for the main card, with full analysis of the Sanchez-Roundtree, Cooper-Suarez and Jedrzejczyk-Gadelha bouts. Stay right here for the latest results, commentary and more from TUF 23.

Joanna Jedrzejczyk vs. Claudia Gadelha Round-By-Round Commentary
Decision
Jedrzejczyk keeps her strawweight championship belt with a 48-46, 48-45, 48-46 unanimous decision over Gadelha. What a rally. What a fight.

Round 5
Jedrzejczyk wants to touch gloves to start the round, but Gadelha wants none of it and waves off the champ. Uh oh.

Jedrzejczyk lands a heavy right hand about 1 minute into the round.

What a combo by @JoannaMMA! What a fight! What a performance! Why are my hands so sweaty?!?! https://t.co/ixdz9yKtwL

Gadelha responds with another bull rush that sends the champ toward the cage. Jedrzejczyk is pinned to the cage, with Gadelha going for the takedown, but alas an escape. Jedrzejczyk throws a 1-2 punch combo, followed by a kick toward Gadelha’s face. The champ wants to end this her way.

More punches from Jedrzejczyk, another bull rush from Gadelha, and both fighters end up on the ground. They return to the center of the octagon and lock up some more, with Jedrzejczyk seeking that one punch to end the fight. Jedrzejczyk’s punches hit their mark, and Gadelha wraps up to prevent further damage.

The round ends, and we’re going to the judges.

Round 4
Jedrzejczyk wants to box, and she keeps the pressure on Gadelha with combo punches at her bloodied face. Jedrzejczyk then starts working Gadelha’s legs again, then Gadelha reminds Jedrzejczyk she still has strength with a heavy strike. The champ and the challenger continue to brawl as they run out of steam, trading punches and grapples in the center of the octagon.

Jedrzejczyk opens Gadelha’s eye with a punch and smells (and sees) blood, standing tall and pummeling her face with big strikes. Jedrzejczyk misses with a high leg kick as the round ends, and we’re going the distance.

The winner of Round 5 likely is winning this fight.

Round 3
Jedrzejczyk needs to make a move in this round — Gadelha clearly has won the first two — but she doesn’t have a good start. Gadelha drives the champion to the mat not once but twice, and Jedrzejczyk is left to defend again. The fighters separate, and Jedrzejczyk responds with heavy strikes that bloody Gadelha.

Jedrzejczyk works Gadelha’s face and legs with punches and kicks, and the crowd roars its approval. Jedrzejczyk seems to be keeping her distance to prevent takedowns, but Gadelha sees an opening and again bull-rushes the champ. Jedrzejczyk escapes, reverses and lands a wicked shot to Gadelha’s face before the ref separates them. Gadelha returns the favor with a punch that seems to buckle Jedrzejczyk’s knees, and the bout becomes a toe-to-toe street fight until the horn sounds.

Round 2
Jedrzejczyk opens the round by trying to use her unrivaled striking power to overwhelm Gadelha, but Gadelha responds by bull-rushing Jedrzejczyk and dropping her to the mat on the second try. Jedrzejczyk is left to attempt another escape attempt, and the two trade strikes as the champion tries to slip away. Gadelha isn’t letting that happen, though, and keeps Jedrzejczyk’s lethal right arm under wraps.

Jedrzejczyk finally frees herself and gets on top of Gadelha, but not much comes of it.

.@JoannaMMA wins the battle of position and gets Gadelha to the ground! What a fight so far! #TUFFinale https://t.co/MmJYkLZ2kB

The fighters eventually separate, and Jedrzejczyk ends the round with two thundering leg kicks.

Round 1
Jedrzejczyk and Gadelha don’t touch gloves — big surprise, huh? Gadelha immediately brings the crowd to its feet with a strike that floors Jedrzejczyk, then she hops on her and starts working for a choke.

Jedrzejczyk stands up, though, and works her way out of Gadelha’s grasp. Jedrzejczyk and Gadelha go toe-to-toe with punches for about 10 seconds, then Gadelha pushes Jedrzejczyk to the cage.

Gadelha moves Jedrzejczyk to the mat and lands heavy strikes to her face, and the crowd cheers wildly. Jedrzejczyk stands up again and lands two punches that bring oohs and aahs from the fans. The trading of punches continues for a while, with both fighters taking their lumps and already looking a bit tired from the furious action.

No way this goes all five rounds, right?

Pre-fight
Now for the main event. Jedrzejczyk, the reigning women’s strawweight champion, is 11-0 and doesn’t plan to add a loss to that record tonight. Gadelha is 13-1 — that loss coming to Jedrzejczyk, and she wants revenge. We’ll see if this is the time and place.

Round 3
Sanchez opens the round with a spinning back-kick that does some damage, but he’s unsuccessful at getting Rountree back on the ground. Rountree excites the crowd with some hard strikes to the back of Sanchez’s head, but they seemingly do little. Sanchez eventually works his back on top of Rountree on the mat and, as in Round 2, stays there awhile. Rountree is visibly gassed and just trying to make it to the bell.

Sanchez moves his way to Rountree’s back, applying a choke with his left hand and some punches with his right. Rountree makes it to the final bell, with boos raining down, but the decision has to belong to Sanchez. We’ll find out soon.

Round 2
Sanchez continues to work Rountree toward the ground and the cage, and Rountree tries to use his fists to fight out of it. He can’t, though, and having Sanchez constantly pressing on him must be wearing on Rountree. The boo-birds begin to fly as Sanchez lays on top of Rountree and works him over with methodical strikes. It’s not pretty, but it seems to be doing the job. Rountree’s nose is bloodied, and he seems worn down by the constant pressure.

.@ElDirteSanchez takes Rountree down and keeps him down. Lands a big right hand at the end of the round! #TUFFinale https://t.co/PSQyaNfd4c

The round ends with Rountree on the mat, battered. He needs a miracle turnaround to win this fight.

Round 1
Sanchez and Rountree stand up and trade strikes, occassionally sneaking in a kick, for the first minute until Sanchez gets on top of Rountree on the ground and shoves him toward the cage. Rountree stands up for a few seconds before Sanchez slings him back down to the mat once, then slams him down hard another time.

Sanchez stays on top and works Rountree’s head with some right-hand punches, although Rountree returns the favor with an elbow or two. The crowd goes restless with the lack of action and loudly cheers when Rountree escapes with about 40 seconds left in the round. They’re disappointed, though, when Sanchez again slams Rountree to the ground and stays there to complete the round.

Pre-fight
Light heavyweights such as Daniel Cormier are in the Fight Week spotlight, and Sanchez and Rountree want to join their ranks. UFC.com’s John Gagnon writes in his fight preview that while the experienced Sanchez normally fights at middleweight, he’s the tournament favorite, although Rountree possesses knockout power with his fists and legs. Sounds like it might be a tight fight.

Amanda Cooper vs. Tatiana Suarez Round-By-Round Commentary
Round 1
Suarez doesn’t waste time getting Cooper to the ground and keeping her there, all the while pushing her toward the cage. Suarez stands over Cooper and starts working her face with hard strikes, but Cooper turns the tables, reverses Suarez, then eventually escapes after almost successfully executing an arm bar.

Suarez puts Cooper right back on her back, though, and starts laying hard strikes again — the crowd gasping at one in particular — and works her way around for a d’arce choke, eventually coercing Cooper to tap out at 3:43 of the first round.

Suarez, the pride of Rancho Cucamonga, Calif., is The Ultimate Fighter strawweight champion.

Pre-fight
Cooper and Suarez walk to the octagon for their UFC debuts, and the strawweights’ nerves have to be fluttering. After all, a UFC contract is on the line. UFC.com’s John Gagnon points out in his fight preview that Suarez’s Olympic-level wrestling ability has made her the favorite, but Cooper brings striking ability that could put her on top.

Other main card results
Joaquim Silva def. Andrew Holbrook by TKO at :34 of the first round

Joacquim Silva opens up the #TUFFinale main card with a BIG knockout! That was vicious! https://t.co/d5Gaw6QiQR

Doo Ho Choi def. Thiago Tavares by TKO at 2:42 of the first round

WOW. Another 1st round KO for Doo Ho Choi! Right straights do not get prettier than that. #TUFFinale https://t.co/uk6fKrL4TK

Will Brooks tells Eddie Alvarez to hold onto that title for a little while. He's coming for him#TUFFinale 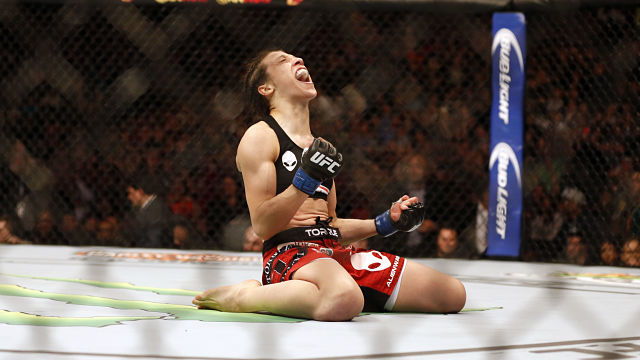