Standing at just 5-foot-9 and 180 pounds, Betts leads the team with 28 home runs, five of which he’s hit in Boston’s last four games. His power numbers through Wednesday — 89 RBIs, .572 slugging percentage, .930 OPS — rank right up there with the game’s biggest sluggers, and he leads MLB with 67 extra-base hits.

So, how does a guy who’d blend in at your local grocery store generate as much power as a 6-foot-3, 230-pound giant like Ortiz? MLB Network analyst and former New York Mets general manager Jim Duquette believes Betts’ lightning-quick hands are the key.

Indeed, Betts has one of the quickest swings in the game. He’s hit 24 of his 28 home runs this season to left field, displaying an impressive ability to clean out inside fastballs. But bat speed is only part of the equation, and Betts seems to have perfected another secret to power hitting success: Bat angle.

In fact, Duquette believes Betts’ swing plane bears an uncanny resemblance to that of the American League’s reigning MVP.

“He’s got an almost perfect bat angle for a power hitter,” Duquette said of Betts. “I look at a little bit of what (Toronto Blue Jays third baseman) Josh Donaldson does with his swing once it gets started, and Mookie has some similarities.

“They both get their hands back. Their back elbow comes up around their shoulder, maybe a little higher, and as they start their swing, the bat comes into the zone at an angle that can catch it perfectly. It’s the perfect launch angle — 10 to 30 degrees off the bat — and it just seems like both of those guys are catching it at the right spot more often.”

Below is a side-by-side comparison of their stances on home run swings — Betts’ from one of his two dingers Tuesday night, Donaldson’s from an Aug. 1, 2015 blast: Just as Duquette points out, Betts and Donaldson both cock their back elbow high above their hitting plane, allowing them to generate even more bat velocity as their hands fly through the hitting zone.

“He does a lot of things that good hitters do — that power hitters do,” Duquette says of Betts. “I was really struck watching Betts, once he got the hands back and started to swing forward, how similar (his and Donaldson’s) swings were.”

That’s certainly good company for Betts to be in (bat-throwing antics notwithstanding), and the 23-year-old has the potential to follow in the Blue Jays slugger’s footsteps. Betts has emerged as a legitimate MVP candidate, boasting the third-best WAR in baseball (6.9) behind two players in Mike Trout (7.7) and Jose Altuve (7.0) whose teams both might miss the playoffs.

There’s obviously much more to Betts’ game than power, but it’s still remarkable to see a player of his stature hit homers at such a high rate. And right now, he’s showing no signs of slowing down.

“I think he’s already pushed himself into an elite class in Major League Baseball,” Duquette said. “He’s one of the best in game right now, and he doesn’t turn 24 years until October.” 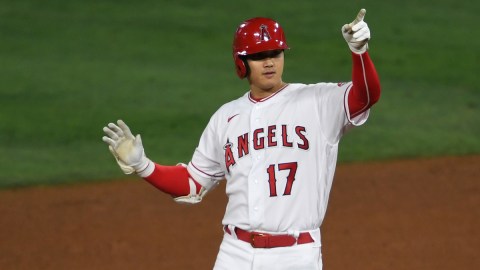