The Boston Red Sox had no interest for drama in Hollywood on Friday night.

The Red Sox left little doubt in the first installment of their three-game series against the Los Angeles Dodgers, getting a terrific wire-to-wire performance from Steven Wright and breaking out at the plate to cruise to a 9-0 win at Dodger Stadium.

It was a much-needed win for the Sox, who now are 5-4 on their West Coast road trip with two games left to play before returning to Fenway Park.

GAME IN A WORD
Breeze.

After playing four straight games decided by two runs or fewer, the Red Sox finally were able catch their collective breath Friday night in a game that saw the Dodgers offer little resistance.

IT WAS OVER WHEN…
Boston’s bats exploded for five runs in the eighth inning.

The Sox clubbed five hits in the frame to transform a 4-0 lead into a massive 9-0 cushion. Not that Wright needed the extra support.

ON THE BUMP
— Wright flummoxed the Dodgers in his first career outing against the club.

The right-handed knuckleballer twirled a complete-game shutout, his first of the season, allowing just four total baserunners on three hits and one walk. L.A.’s hitters looked lost at the plate, as Wright retired 15 straight batters between the third and eighth innings and tied a season-high with nine strikeouts, four of which were looking.

It was the fourth time this season Wright has gone the distance, as his ERA dropped to 3.01 after one of the best performances by a Red Sox pitcher this season.

IN THE BATTER’S BOX
— Sandy Leon was the star of the night offensively. He got the Red Sox on the board with a sacrifice fly in the second inning, blasted a two-run homer in the fourth and added an RBI single in the eighth for good measure.

Leon finished 2-for-3 and tallied four of the team’s eight RBIs. He’s now hitting .374 on the season.

— Mookie Betts gave Leon a run for his money. He hit an absolute laser of a homer in the third inning — his 23rd of the season — and tallied two more hits, including an RBI single in the eighth. He finished 3-for-5 with two RBIs, giving him 73 on the year.

— Dustin Pedroia exited in the third inning after fouling a ball hard off his left ankle. Travis Shaw took his spot in the order and played third base, while Aaron Hill shifted over to second base.

— Shaw made the most of his cameo, tallying his 14th homer of the season with a solo blast in the eighth that kicked off the Red Sox’s five-run frame.

— Brock Holt entered for Bryce Brentz in left field and contributed to the scoring in the eighth when Chase Utley booted his grounder to second base, allowing one run to score on the error.

— Hill reached base four times in four plate appearances, going 1-for-1 with a run scored and two walks. He now owns a six-game hitting streak.

— Andrew Benintendi pinch hit for Jackie Bradley Jr. in the ninth and grounded out to second base.

— Wright was great on the mound, but not so much at the plate, where he went 0-for-4 with three strikeouts.

In honor of the #OpeningCeremony Varitek gave us a little fashion show of his 1992 Olympic attire! #StillFitsKinda ? pic.twitter.com/T0oprYnn1q

UP NEXT
Game 2 between the Red Sox and Dodgers on Saturday will feature left-hander Eduardo Rodriguez taking the mound against L.A. right-hander Ross Stripling. First pitch at Dodger Stadium is set for 4:05 p.m. ET. 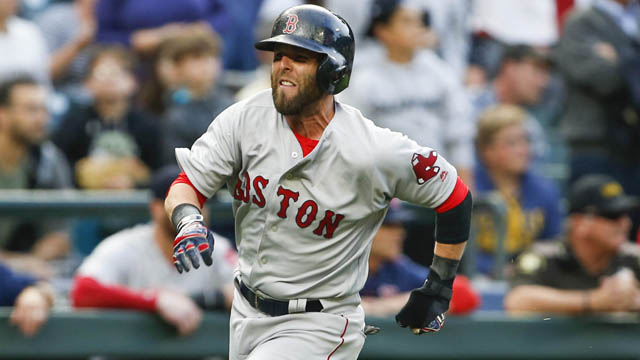 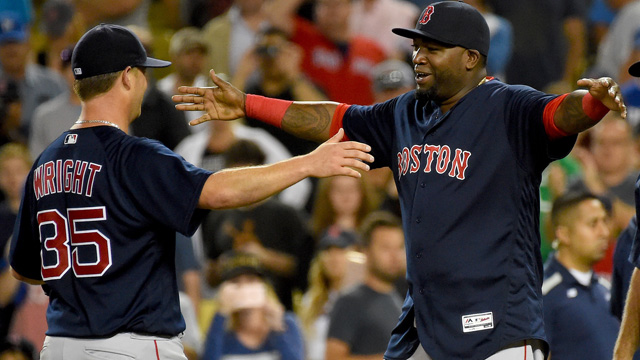