Jacoby Brissett led the New England Patriots to a win in his first NFL start, but he did not leave the game unscathed.

Brissett tore a ligament in his right thumb during the second half of the Patriots’ 27-0 win over the Houston Texans on Thursday night, a source told WEEI.com’s Mike Petraglia on Friday.

Brissett’s reported injury is the second suffered by a Patriots quarterback in two weeks. Jimmy Garoppolo, who started New England’s first two games in place of suspended Tom Brady, went down with a shoulder injury during Sunday’s win over the Miami Dolphins and missed Thursday’s game as a result.

Brissett, New England’s only healthy quarterback against Houston, completed 11 of 19 passes for 103 yards and also carried the ball eight times for 48 yards, including a 27-yard touchdown run.

Garoppolo’s status for next Sunday’s game against the Buffalo Bills remains to be seen. Brady is eligible to return the following Sunday, when the Patriots visit the Cleveland Browns in Week 5.

UPDATE (2:58 p.m. ET): Ian Rapoport of NFL Media offered additional details about Brissett’s injury, citing a source who said “it is not deemed to be a serious one.”

#Patriots QB Jacoby Brissett?s thumb was bothering him on the sidelines, and @Trags said he has a torn ligament (sprain). Severity is key.

#Patriots QB Jacoby Brissett did suffer a thumb sprain, source said. Those involved are weighing his options. Expect them to add a QB

#Patriots QB Jacoby Brissett?s thumb injury is not deemed to be a serious one, source said. Will be monitored, but the team has 10 more days

Source says Brissett tore a thumb ligament in R hand, as @Trags said. Happened when Wilfork landed on him. Initially thought it was broken

Source close to Brissett says he won't need surgery as of now. Injury happened early 3Q, he played through it 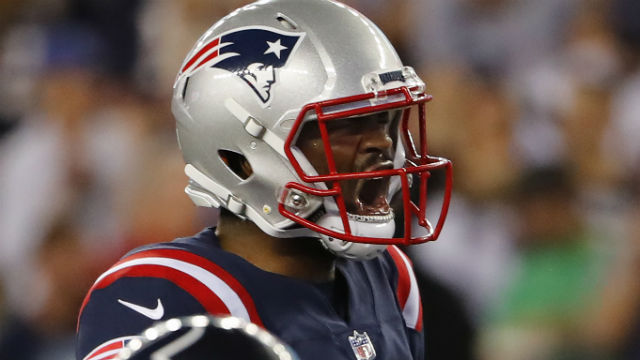