FOXBORO, Mass. — The difficulty level was set to high for quarterback Jimmy Garoppolo in his first NFL start. Someone must have switched it to easy in the New England Patriots? Week 2 matchup.

Garoppolo shredded the Miami Dolphins for three touchdowns and 234 yards before exiting the game with a shoulder injury in the second quarter. Garoppolo’s status now is uncertain for Weeks 3 and 4, while starting quarterback Tom Brady is suspended. Rookie Jacoby Brissett took over for Garoppolo. The Patriots might need to sign a third QB.

Garoppolo was one of the Patriots’ stars of their 31-24 win over the Dolphins. Here’s who else stood out.

UP:
JIMMY GAROPPOLO
Garoppolo went 18 of 27 for 234 yards with three touchdowns before leaving the game. He was making tough throws all over the field and was playing like the second best quarterback in the AFC East.

The Patriots relied on short, easy passes in Week 1 and took the reins off Garoppolo in Week 2. He was injured when he was hit hard on the left shoulder and landed on his right shoulder.

LEGARRETTE BLOUNT
Blount’s been great when the offensive line has given him room to run. He has 51 carries on the season — 20 have gone for 1 yard or fewer, while six have gone for 10 yards or more.

He finished this week’s game with 129 yards and a touchdown on 29 carries plus this impressive athletic feat.

DANNY AMENDOLA
Amendola had the first multi-touchdown game of his career. He caught four passes for 50 yards with two scores, both from Garoppolo.

MARTELLUS BENNNETT
Bennett did his damage as a blocker in Week 1. He had five catches on six targets for 114 yards and a touchdown in Week 2. His longest play was a 37-yard catch on the first completion of Brissett’s NFL career.

CHRIS LONG
Long seemed to be the only Patriots defender capable of pressuring Dolphins quarterback Ryan Tannehill on Sunday. He finished the game with two quarterback hits, a fumble recovery, a batted pass and a tackle for loss. He wasn’t given a sack when he downed Tannehill on a botched snap.

DOWN:
MALCOLM BUTLER
The Patriots’ defense as a whole had issues, but Butler is supposed to be above struggling as the team’s No. 1 cornerback. He allowed seven receptions on 10 targets for 132 yards. 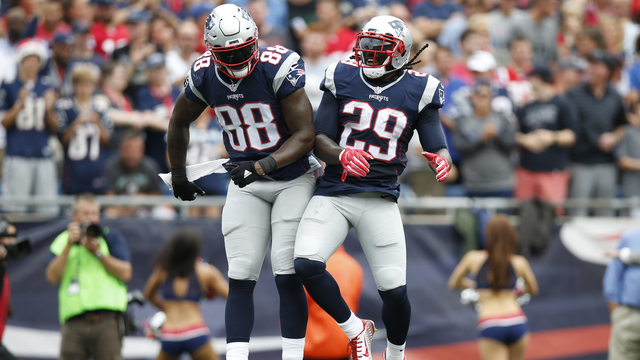 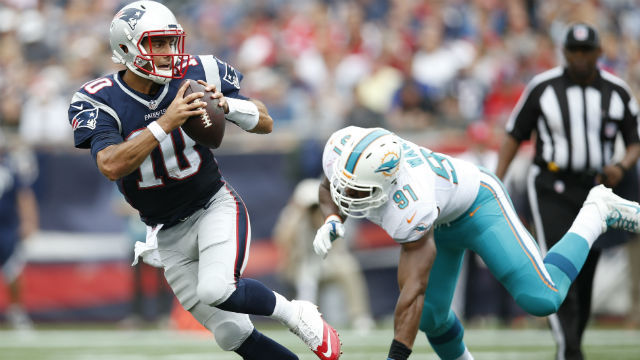