Reports vary on how long Garoppolo will be out and whether he’ll be able to suit up or play Thursday night against the Houston Texans.

If Garoppolo can’t start, rookie Jacoby Brissett will take his place, as he did in the Patriots’ 31-24 Week 2 win over the Miami Dolphins.

So what should you know about Brissett?

— The 6-foot-4, 235-pound quarterback was selected by the Patriots out of North Carolina State with the 91st overall pick in the 2016 NFL Draft. It took him a while to sign his rookie contract because he represents himself.

— Brissett began his college career at Florida, where he played in former Patriots offensive coordinator Charlie Weis’ system. Brissett transferred after two seasons with the Gators.

— Brissett didn’t rank highly in Pro Football Focus’ accuracy metrics coming out of college. His 71.3 accuracy percentage was below average. Of his 161 incompletions charted by PFF, 19 were drops, 27 were thrown away, five were batted at the line, two were spiked and five came when he was hit as he threw.

— He ranked last in PFF’s deep accuracy metric, completing just 31 percent of his throws over 20 yards. He was 14-if-58 for 563 yards and five touchdowns with one interception.

— Brissett has been described as a film junkie. An NFL scout told NESN.com that Brissett is cool under pressure and a hard worker. He’s known to have a big arm, if the Patriots choose to unleash it.

— He ran a 4.94-second 40-yard dash at the NFL Scouting Combine and also posted a 7.17-second three-cone, 4.53-second short shuttle, 31-inch vertical leap and 9-foot, 5-inch broad jump. Those aren’t great testing numbers, but Brissett has enough mobility to take off when necessary, and he has the size to withstand punishment. He was tough to bring down during his time at NC State, despite a shaky offensive line.

— Brissett completed 6 of 9 passes for 92 yards in his NFL debut Sunday. He also ran the ball four times for 12 yards.

— As MassLive.com noted, Brissett would be the first black quarterback to start a game for the Patriots.

— Patriots offensive coordinator Josh McDaniels praised Brissett’s “poise and composure” during a conference call Monday. The Patriots thought highly enough about the rookie not to carry a veteran quarterback throughout the summer despite knowing Tom Brady would be suspended for the first four games of the 2016 season. 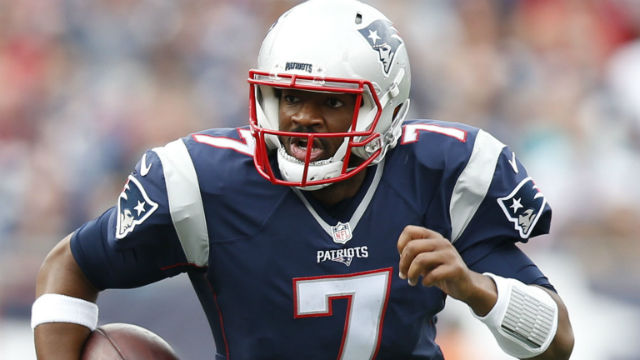 With Jacoby Brissett Or Jimmy Garoppolo, Patriots Will Stick To Same Formula 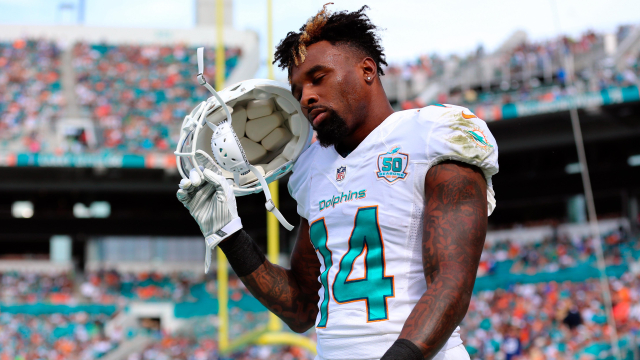 Jarvis Landry Is Upset About Dolphins Being ‘Almost Team’ Vs. Patriots