Final, Patriots 35-17: And that will do it. The New England Patriots outscore the Cincinnati Bengals 25-10 in the second half to improve to 5-1 on the season.

Tom Brady completed 29 of 35 passes for 376 yards and three touchdowns in the win, and Rob Gronkowski finished with seven receptions for a career-high 176 yards and one score.

Next up for the Patriots is a trip to Pittsburgh next Sunday to take on the Steelers.

After referees determined Blount hadn’t crossed the goal line on his initial attempt, the Patriots running back bulled his way into the end zone two plays later to all but seal things here in Foxboro.

The chippiness that has pervaded this second half continued after the touchdown, as Blount was flagged for unnecessary roughness for shoving Vontaze Burfict.

Fourth quarter, 2:00, Patriots 28-17: We’ve reached the two-minute warning, and the Bengals are out of timeouts. The Patriots are looking at a second-and-goal from the Cincinnati 5.

Fourth quarter, 3:32, Patriots 28-17: Jabaal Sheard and Dont’a Hightower teamed up to bring down Andy Dalton in the backfield on third down, forcing the Bengals to punt it away.

Fourth quarter, 6:04, Patriots 28-17: The Patriots came out of that drive with three points but potentially could have had more if Rob Gronkowski wasn’t flagged for taunting.

There was a lot of chirping between the Patriots and Vontaze Burfict after the Bengals linebacker took a shot at Bennett’s knees.

Vontaze Burfict going low on Bennett. Seemed unnecessary but what do I know. #Patriots pic.twitter.com/4DWnqa76TD

Fourth quarter, 12:34, Patriots 25-17: The Patriots forced a red-zone stop for the second time today. They’re now 2 of 4 on the day and 10 of 14 on the season in the red zone. They’re certainly showing improvement today.

It’s a one-score game after the Bengals’ field goal.

Brady hit Gronkowski on a 38-yard completion, getting the Patriots into the red zone. He then found Bennett for 11 yards before hitting James White for a 4-yard TD.

Third quarter, 4:33, Patriots 19-14: A lot of folks who were calling the Patriots’ defense terrible have been quiet the past two drives. The Patriots forced a three-and-out and have the ball on their own 47-yard line.

Brady hit Martellus Bennett for 24 yards and Gronkowski for 38 yards to get down the field quickly. He then connected with Gronkowski for a 4-yard touchdown.

Third quarter, 7:05, Bengals 14-12: The Patriots’ finally brought some heat, and Dont’a Hightower put two points on the board with a sack for a safety.

The Patriots’ defense looked pretty solid on that drive.

Third quarter, 8:11, Bengals 14-10: The Patriots picked up one first down, lost yards, got penalized, gave up a sack and then were forced to punt. Not an ideal drive.

Third quarter, 11:14, Bengals 14-10: The Bengals charged down the field to retake the lead, completing passes of 23 and 27 yards before a 5-yard touchdown hookup between Dalton and Brandon LaFell.

The Patriots have the ball on their own 26-yard line after the kickoff and return.

End half, Patriots 10-7: The Bengals went three-and-out to end the half with two incomplete passes and a run for no gain.

Second quarter, 1:01, Patriots 10-7: The Patriots’ offense decided to wake up from their 29-minute slumber.

The Patriots scored on a 15-yard catch-and-run by running back James White. They got into the red zone on a 39-yard catch by Chris Hogan.

Second quarter, 3:10, Bengals 7-3: The Patriots’ red-zone defense was tested again, and they failed this time. Andy Dalton ran it in for a 2-yard score on an option.

This has been an ugly start for the Patriots’ offense, who can’t get anything going early. There’s just over three minutes left in the half, and they have 105 total yards.

Second quarter, 6:36, Patriots 3-0: The Patriots were forced to punt after getting off to a hot start with a 15-yard run by LeGarrette Blount. Brady was sacked by Pat Sims on second down. The sack was allowed by Patriots right guard Shaq Mason.

Second quarter, 8:50, Patriots 3-0: Sorry for the delay. WiFi is being wonky here at Gillette Stadium.

The Patriots stuffed the Bengals on the goal line as Cincinnati went for it on fourth and goal at the Patriots’ 1-yard line.

The Patriots had allowed touchdowns on 8 of 10 red-zone opportunities. They’re now 8 of 11.

First quarter, 2:49, Patriots 3-0: The Patriots were forced to punt on their second drive. They were halted after a holding penalty called on wide receiver Chris Hogan.

First quarter, 12:06, Patriots 3-0: The Patriots got on the board with a 46-yard field goal by Stephen Gostkowski.

The Patriots moved down the field thanks in large part to a 32-yard completion from Tom Brady to tight end Rob Gronkowski.

The crowd went berserk when Brady took the field. The video screen had to flash a message that said “quiet please, offense at work.”

This guy just reintroduced himself to Gillette Stadium. pic.twitter.com/VHJQQQGMU2

Jones was ejected from last week’s game, so it’s surprising, but not shocking, to see the 2016 second-round pick punished for the misstep. It’s surprising to see Coleman inactive for the second straight week. He began the season as the Patriots’ No. 3 cornerback.

Cornerback Eric Rowe will make his Patriots debut. He’s been out since the Patriots acquired him in a trade with the Eagles.

Right tackle Marcus Cannon also returns to the lineup after he was out with a calf injury.

10:35 a.m.: Patriots wide receiver Julian Edelman was the first player on the field Sunday, going through his usual pregame warmup.

Julian Edelman's the first on the field going through his pregame warm-up. pic.twitter.com/ll075bTMD6

Video: Tom Brady with a focused look as he arrives at 8:55 a.m. pic.twitter.com/TmoMvzQwAC

The New England Patriots quarterback makes his return to Gillette Stadium at 1 p.m. Brady came back from a four-game suspension in Week 5 against the Browns in Cleveland and went 28 of 40 for 406 yards with three touchdowns. The Patriots will play the Cincinnati Bengals in front of what should be a very raucous crowd.

Tight end Rob Gronkowski is expected to play despite being listed as questionable with an illness and hamstring injury, a source told ESPN’s Adam Schefter. Linebacker Jamie Collins reportedly isn’t expected to play after injuring his hip this week in practice.

The Patriots declare their inactives at 11:30 a.m.

The Patriots listed linebacker Jonathan Freeny and tight end Greg Scruggs as out Friday, then both players were placed on injured reserve Saturday. The Patriots signed defensive end Geneo Grissom and defensive tackle Anthony Johnson off the practice squad to replace them on the roster.

Here are our keys to Patriots victory.

The game kicks off at 1 p.m. It airs locally on CBS. Check your local listings here. 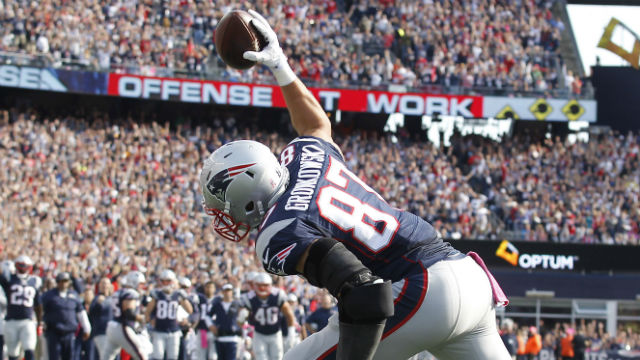 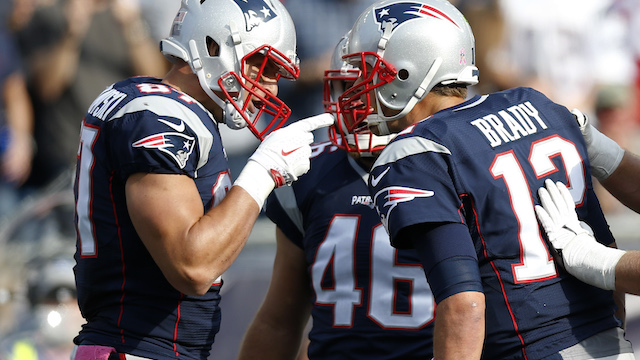