Fourth quarter, 3:02, Patriots 27-16: And that will do it. The Pittsburgh Steelers’ final drive stalled out, and one Tom Brady knee put a bow on the New England Patriots’ third consecutive victory.

Next up for the Patriots is a rematch against the only team that’s beaten them this season, the Buffalo Bills.

Fourth quarter, 3:02, Patriots 27-16: The Steelers force another Patriots three-and-out, giving them them the ball back with just over three minutes to play and a lot of ground still to cover. — Z.C.

Fourth quarter, 5:30, Patriots 27-16: Nothing doing once again for the Steelers’ offense, which has come up empty on each of its last three drives. Time is beginning to run out for Pittsburgh, which has just one timeout remaining. — Z.C.

New England’s offense takes over at its own 44-yard line. — Z.C.

Still a lot of time remaining in this one. — Z.C.

Tom Brady found his big tight end twice during a six-play, 75-yard scoring drive, including a 37-yard catch-and-run that set up LeGarrette Blount’s second touchdown of the afternoon.

Blount plowed into the end zone from 5 yards out, and Gostkowski converted the extra point to stretch New England’s lead to double digits. — Zack Cox

Fourth quarter, 14:44, Patriots 20-16: Among the underrated storylines in today’s game? The Patriots have been much better defensively in the red zone. They’ve allowed touchdowns in just 1 of 4 red-zone opportunities.

They just held the Steelers to a field goal at the 26-yard line. The defense is bending but not breaking.

Third quarter, 6:19, Patriots 20-13: When in doubt, there’s always Rob Gronkowski to turn to. Brady found the big tight end for a 36-yard touchdown on a seam route. Kicker Stephen Gostkowski then missed his extra point. It’s time to start worrying.

Third quarter, 8:44, Patriots 14-13: The Steelers cut the Patriots’ lead to one point after a successful 46-yard field goal attempt.

Now the Patriots’ offense must respond and come back with a much better drive than their last.

Third quarter, 13:33, Patriots 14-10: The Patriots just completed a horrific offensive drive. Brady threw incomplete to White, then Nate Solder was called for holding, then Solder was called for holding again, because Brady scrambled for 3 yards. The series ended with a 5-yard completion to Martellus Bennett and a punt. The Steelers have the ball on their own 24-yard line.

End half, Patriots 14-10: The Patriots held on in the red zone and forced the Steelers to settle for a field goal to end the half.

Malcolm Butler finished off the series with a pass breakup before the field goal.

Second quarter, 1:56, Patriots 14-7: The Patriots blew an opportunity to have scores to end and begin the half. They were forced to punt after a drop by Edelman. Even if Edelman had caught the ball, right guard Shaq Mason was flagged for holding.

Second quarter, 4:42, Patriots 14-7: The Steelers wasted a scoring opportunity with a missed field goal, giving the Patriots the ball at their own 24-yard line.

A holding call brought back a touchdown pass from Landry Jones to Darrius Heyward-Bey. The Steelers had a chance to make this one very interesting.

Second quarter, 8:10, Patriots 14-7: The drive went poorly for the Patriots. Brandon Bolden dropped a sure-first down on third down and Ryan Allen’s punt went off the side of his foot and into the stands.

The Steelers have the ball on their own 47-yard line.

Second quarter, 9:02, Patriots 14-7: The Patriots let up their first 40-plus-yard reception of the season — a 51-yarder to Antonio Brown. Malcolm Butler was in coverage.

Landry Jones hit Darrius Heyward-Bey for a 14-yard touchdown pass over cornerback Eric Rowe. The Steelers previously were 0 of 3 on third down. They’re now 1 of 4 and 1 of 1 in the red zone.

The Patriots were surgical again, using 11 plays to work 84 yards down the field. Brady is now 11 of 12 for 109 yards with a touchdown. Blount has 11 carries for 50 yards and a score against his former team.

First quarter, 0:50, Patriots 7-0: The Patriots forced another punt after the Steelers were called for offensive pass interference on a deep throw from Jones to Darrius Heyward-Bey.

The Patriots have the ball on their own 16-yard line after the punt.

First quarter, 2:55, Patriots 7-0: The Patriots meticulously drove down the field for a touchdown. Their biggest play came at the end on a 19-yard touchdown hookup between Brady and running back James White.

First quarter, 10:18: The Patriots and Steelers are trading turnovers. The Steelers got inside the red zone, then Landry Jones threw an interception to Malcolm Butler. The Patriots have the ball on their 20.

It was a horrific throw by Jones, and Butler’s first interception of the season.

First quarter, 12:42: Tom Brady’s first pass went to Chris Hogan, but the Patriots receiver fumbled after a 10-yard gain. The ball was recovered by the Steelers, and the play is under review.

UPDATE: The ruling on the field stands. Steelers ball.

First quarter, 12:51: The Patriots forced a three-and-out on the Steelers’ first drive. They picked up 8 yards on two complete passes. Le’Veon Bell also had a carry for no gain.

First quarter, 15:00: The Patriots lost the coin toss and will kick off. Even when they lose, they win.

4 p.m.: The Patriots just finished their final pregame warmups. Nothing unusual in the Patriots’ starting defense or offense.

It appears Chris Long and Rob Ninkovich both could start along with Jabaal Sheard, Dont’a Hightower and Jamie Collins in the Patriots’ front seven.

That means linebackers Jamie Collins and Elandon Roberts, cornerback Justin Coleman and running back Brandon Bolden all are active.

Coleman, Eric Rowe and Jonathan Jones will be the Patriots’ reserve cornerbacks. It’s unclear who will return kicks with Foster and Jones out. Devin McCourty, Danny Amendola, Matthew Slater, Julian Edelman, LeGarrette Blount and Patrick Chung all have experience as kick returners.

A football field from a press box. My art: pic.twitter.com/Aj8unPKnID

“American Idol” winner Trent Harmon is on the field performing at the 50-yard line.

Doing the national anthem today: a guy with a scarf and a hat. pic.twitter.com/j42cDL2UoF

10:45 a.m.: The Pittsburgh Steelers will be without quarterback Ben Roethlisberger in Week 7, but the New England Patriots still will have their hands full with the NFL’s best one-two punch of skill-position players: wide receiver Antonio Brown and running back Le’Veon Bell.

The Patriots have been solid against the run this season, but they won’t be able to stack the line with big bodies against Bell, since rookie defensive tackles Vincent Valentine and Woodrow Hamilton were downgraded to out of Sunday’s matchup. Malcom Brown and Alan Branch are the only remaining 300-plus-pound defensive tackles on the Patriots’ roster. Interior rusher Anthony Johnson could chip in against the run Sunday. The Patriots might even have to use guard Ted Karras as a goal-line defensive lineman.

Cornerback Malcolm Butler, with safety help from Duron Harmon and Devin McCourty, is expected to cover Brown. Butler struggled in that matchup in 2015.

Here are our projections for Sunday’s inactives:

The Patriots also could choose to deactivate Brandon Bolden over Foster or Cyrus Jones over Coleman. 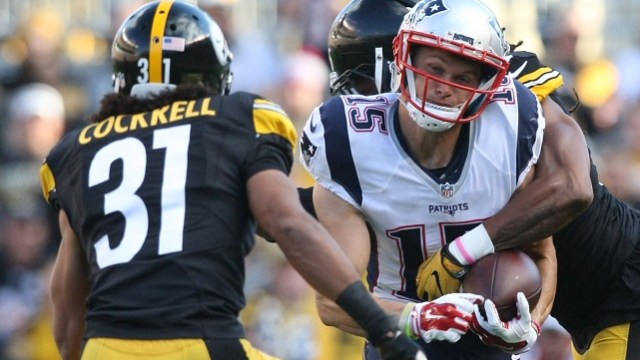 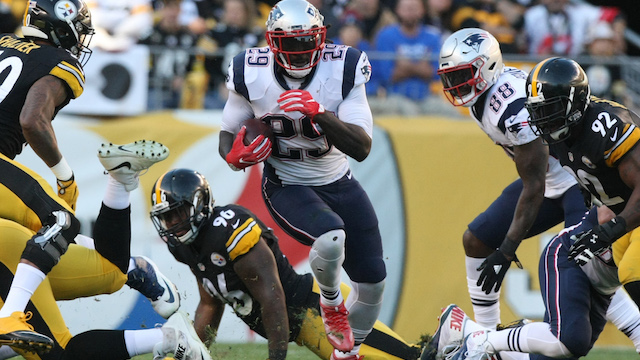