FOXBORO, Mass. — It’s been hard to keep up with the public perception of the New England Patriots’ defense this season.

The unit continued to play its best football of the season Saturday when they dominated the New York Jets 41-3 at home. Heading into the year, the unit was supposed to be elite. They had most of their starters returning from 2015, when they were a top 10 unit in both points and total yards allowed.

After a strong start to the season, many began saying the defense was no longer passing the eye test despite ranking in the top five in points allowed. They were allowing chunks of yards, bending but not breaking, struggling on third down and in the red zone and failing to generate turnovers.

That’s no longer the case, and the only thing holding the Patriots back from being considered an elite defense might be their level of competition. Despite how bad the Jets offense is, however, the Patriots defense should be commended for their performance Christmas Eve.

They allowed just 239 total yards, 3.8 yards per carry, 4.9 yards per passing attempt, a 13.9 passer rating, picked off three passes, recovered a fumble, let up just one of 10 third-down conversions and blanked the Jets on two trips to the red zone.

“Nothing has helped us more than turnovers, third down and red area,” Patriots defensive captain Devin McCourty said after the game. “We continue to focus on that throughout the week and picking up on the little things that we can take advantage of an offense and being able to do that. We’ve just got to keep it going.”

The Patriots offense scored three of their five touchdowns off turnovers. They settled for a field goal on the Jets’ lost fumble, so they were able to generate points off all four takeaways.

“Nothing correlates more to wins than turnovers,” head coach Bill Belchick said. “No. 1 is points, No. 2 is turnovers. We were able to get them today, and then we were able to convert them to points. … We made those plays, and that’s a huge chunk of the game.”

Cornerback Logan Ryan gave his take on where the Patriots’ defense stands as they rank first in points allowed per game and have a top 10 total defense.

“I think it’s just a nature of the business of the NFL,” Ryan said. “It’s the shortest season of all of the sports, so everything is one bad game, ‘it’s terrible,’ one good game, ‘we’re all world.’ It’s been a rollercoaster, especially at DB, and as you get older in this league, you realize you’re somewhere in the middle. Are we the greatest defense of all time right now? Probably not. Are we the worst of all time like they said we were? Probably not. We’re just trying to keep improving.

“The turnovers, we always believed the turnovers will come. I think we were doing things right earlier in the year, and sometimes they just don’t come. Guys take care of the ball against us, obviously, with the offense we have. We were fortunate they came today, and you have performances like this when you get those turnovers.”

All along, turnovers might have been the cause for the Patriots failing to pass the “eye test.” Now that they’re falling, the sky once again appears to be the limit for this improving unit. 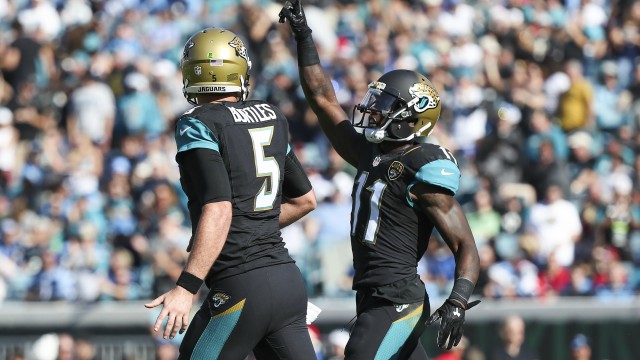 Blake Bortles Catches TD Pass On This Trick Play In Titans Vs. Jaguars 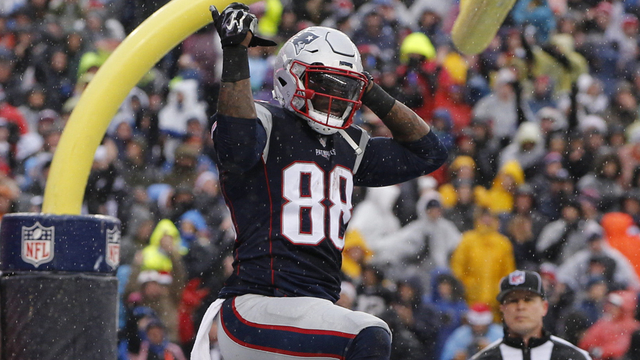 Martellus Bennett Is On To Christmas, Could Care Less About Scoreboard-Watching