Any concerns about the Boston Bruins’ struggles at home temporarily were put to rest Saturday afternoon.

The Bruins exploded for four goals in the second period against the Philadelphia Flyers, which was enough to lift Boston to a 6-3 win at TD Garden. Brad Marchand led the offensive charge, tallying a game-high five points on two goals and three assists.

GET SHORTY
The Flyers actually struck first in this one, getting on the board 2:05 into the first period when forward Pierre-Edouard Bellemare redirected an Ivan Provorov shot past goaltender Tuukka Rask in front of the net.

But the Bruins evened the score five minutes later thanks to a shorthanded tally by Marchand, who used a great individual effort to notch his 16th goal of the season.

It was Marchand’s 21st career shorthanded goal, the most of any NHL player since the 2010-11 season.

POWER SURGE
The second period was (almost) all Bruins, who exploded for four goals in 20 minutes to storm in front.

David Krejci started the scoring parade on the power play exactly two minutes into the frame, netting his 500th career point on a shot from the left circle after receiving a pass from Austin Czarnik.

Marchand got involved on Boston’s next score four minutes later, hitting a streaking Torey Krug with a perfect pass in front of the net to put the Bruins up 3-1.

Philadelphia cut that lead in half with 11:44 to play in the second on a power-play goal of its own from Brayden Schenn. But the B’s would not be deterred.

A five-minute boarding major penalty on the Flyers’ Jakub Voracek put the Bruins back on the man advantage, and they cashed in at the 13:04 mark when Patrice Bergeron’s shot from the right side deflected off a Flyers stick past goaltender Michal Neuvirth.

Defenseman Kevan Miller was injured on Voracek’s hit and did not return.

Zdeno Chara added one more goal for good measure with 4:42 to play in the frame, unleashing a bomb from the right point off a David Pastrnak feed to give Boston a 5-2 advantage.

The Flyers hung around, though, as Wayne Simmonds jammed home a power-play goal with just four seconds remaining in the second to make it 5-3 entering the third.

HOLDING DOWN THE FORT
Philly didn’t get any closer than that. Boston couldn’t cash in on a 5-on-3 man advantage in the third period but kept the Flyers off the board, as Rask stopped all five shots he saw in the final frame. Marchand put the icing on the cake with 54 seconds remaining, his second goal of the afternoon to make it 6-3.

UP NEXT
The Bruins will play another matinee contest Monday when they battle the New York Islanders at TD Garden on Martin Luther King Jr. Day. Puck drop is set for 1 p.m. ET. 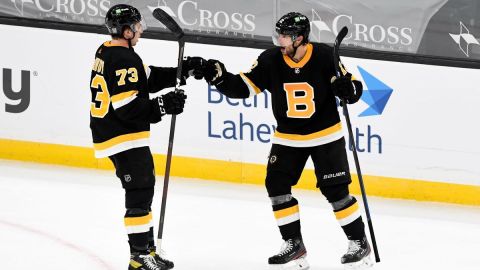 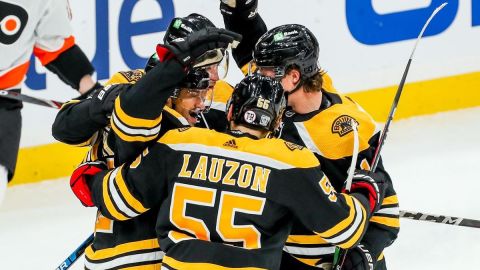