Patriots Assistant Coaches Explain Why Team Is So Connected To Lacrosse - NESN.com Skip to content

HOUSTON — You’ll hear this a lot this week, but the New England Patriots have a former Division I lacrosse player at wide receiver in Chris Hogan. They also have former college lacrosse players at head coach, safeties coach and defensive assistant.

“It just turns out to be a coincidence,” Pellegrino said about the lacrosse connection. “It’s a very close-knit community outside of when you graduate from college. You just run into someone else who plays lacrosse. You have something in common, something to talk about. The environments are different but the same.”

Lacrosse actually helped get Pellegrino a job with the Patriots.

“I actually had assistance through my coach, Dave Pietramala, so I played at Johns Hopkins,” Pellegrino said. “And me and Coach Pietramala have a tremendous relationship. Some people would joke around and say he was like my second dad. He’s a great guy, he’s done a lot for me. I’m very grateful for him. He got me in contact with Coach (Belichick), and he got me the internship.”

Pietramala and Belichick have been close for over 10 years.

“I ended up doing an internship doing football operations,” Pellegrino said. “During my free time, I would help Steve with anything, if he needed copies or whatever. I was going to come back and do the same thing, and Steve was like, ‘Hey, I could use a hand.’ I just helped out, and then I never left.”

Pellegrino is a rare NFL assistant coach who didn’t even play football in college.

“I was a quote unquote ‘standout football player in Long Island,’ ” Pellegrino said “I always told Coach Petro that I was a good football player and all that. I’d sprinkle it in there. I was a lacrosse player with a football mentality, similar to Hogan, that kind of competitiveness.”

Steve Belichick actually played against Hogan in college. Pellegrino only has seen the highlights.

Steve Belichick seems as sick of the lacrosse questions as Hogan.

“Chris was a good lacrosse player,” Belichick said. “That was a long time ago. I think we’ve both moved on with that. …

“Lacrosse is a great sport. I love playing lacrosse. I guess it’s a coincidence.” 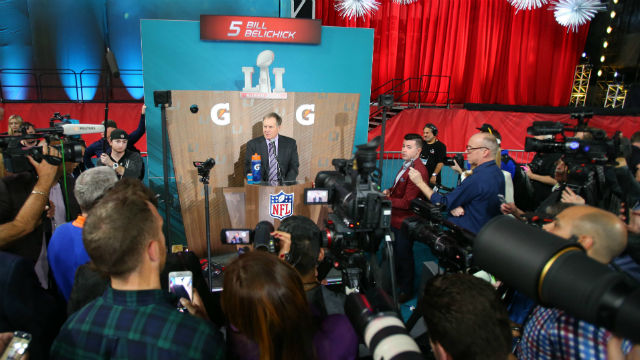