FOXBORO, Mass. — Tom Brady and Chris Hogan both had fantastically productive performances in Sunday’s AFC Championship Game. But two of the most important sequences in the New England Patriots’ rout of the Pittsburgh Steelers came on the defensive side of the ball.

The Patriots’ defense mounted two successful goal-line stands, keeping the Steelers out of the end zone on seven plays from inside the 5-yard line. Pittsburgh managed just three total points from those two golden opportunities, and the Patriots pulled away in the second half to win 36-17 and secure a spot in Super Bowl LI.

“This is the most important part of the field,” rookie defensive tackle Vincent Valentine said after the game. “The coaches harp on us every day that the red zone is the most important, so just keeping them out of the end zone (is) what we’re going to try to do every time.”

It was Valentine’s strong rush up the middle that made New England’s first stand possible. With the Steelers facing second-and-goal from the 2 after tight end Jesse James was hauled down just shy of the goal line, the young D-lineman swarmed into the Pittsburgh backfield and dropped running back DeAngelo Williams for a 3-yard loss.

Quarterback Ben Roethlisberger threw incomplete on third down, and the Steelers were forced to settle for a field goal.

“I don’t know what was happening on that play,” Valentine said.”But I made the play, so that’s all that really matters.”

A touchdown in that situation would have cut New England’s lead to four points with less than two minutes remaining in the first half. Instead, the Patriots went into the break up eight, then outscored the Steelers 16-0 in the third quarter to break the game wide open.

Pittsburgh didn’t threaten again until early in the fourth with a nine-play, 68-yard drive that brought it to New England’s 2-yard line. But Cobi Hamilton’s touchdown reception on third down was wiped away because Hamilton stepped out of the back of the end zone before catching the ball, and quarterback Ben Roethlisberger threw incomplete to Hamilton on fourth-and-goal to turn the ball over on downs.

Some additional notes from a celebratory Sunday night at Gillette Stadium:

— This will be the Patriots’ ninth Super Bowl appearance, breaking the previous NFL record of eight shared by the Dallas Cowboys, Pittsburgh Steelers and Denver Broncos. They’re seeking their fifth championship, which would bring them into a tie for second place all time.

— Running back LeGarrette Blount gained just 47 yards on 16 carries for the Patriots, but his 1-yard touchdown plunge late in the third quarter put New England ahead 27-9 and all but iced the game.

Asked to reflect on what his production has meant to the team this season, the veteran back again credited New England’s offensive line for his impressive numbers, singling out resurgent right tackle Marcus Cannon in particular.

“All the credit for my success running the football goes to the offensive line,” Blount said. “They’ve played great. They’ve stayed healthy all year, and I feel like a few of them played at a Pro Bowl level. Obviously, you know how that goes. (It’s) more of a popularity contest than anything. I don’t know how Marcus Cannon goes (second-team) All-Pro but doesn’t go to the Pro Bowl. That doesn’t make any sense.”

A close second in that category was cornerback Logan Ryan, who sported a throwback Nolan Ryan Houston Astros jersey — a nod to this year’s Super Bowl site.

Logan Ryan wearing a Houston Astros jersey. "Glad you guys noticed that. We're heading to Houston so thought it was fitting" pic.twitter.com/66WNAJmoOw

“It helps that he played high school football in New Jersey like me, so that?s always a big help,” McCourty said. “You know, I got to train with him in March, and as soon as I started training with him, I knew this guy was going to be a great receiver for us, he?s going to really produce. And that?s what he?s done.

“He works hard at everything — running routes in the offseason, lifting hard. It?s been great just to be around him and learn from him, and his work ethic is unbelievable, so I?m extremely happy for him.”

— The Patriots made the surprising decision to receive the opening kickoff rather than defer after winning the coin toss. Brady said it surprised him, too.

“I was sitting there saying, ?We won the toss, great.? ” the Patriots quarterback said. “I was going to sit down and he goes, we got the ball, and I?m like, ?What? I thought we won the toss.? I wasn?t sure how that all worked.”

Head coach Bill Belichick declined to explain his reasoning, simply saying the Patriots “took the ball because we thought that was the right thing to do.” 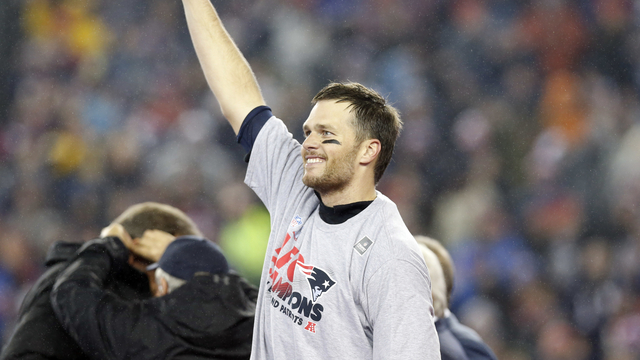 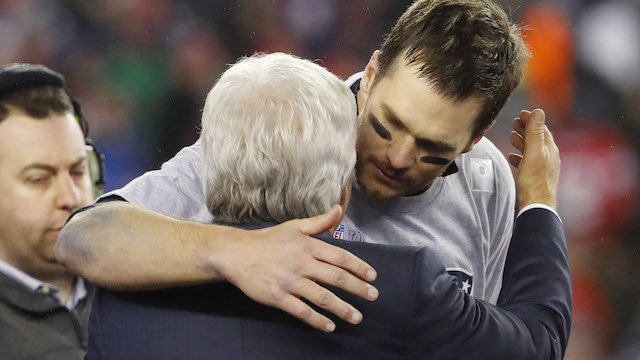