Final, Patriots win 34-28: The New England Patriots are NFL royalty once again after completing the greatest comeback in Super Bowl history, rallying from 25 points down to stun the Atlanta Falcons in overtime in Super Bowl LI.

Super Bowl MVP Tom Brady capped what surely will go down as the greatest Super Bowl ever played with a touchdown pass to running back James White on the opening drive of the extra session. After starting slow, Brady responded with an epic second half, finishing with 43 completions on 62 attempts for a Super Bowl-record 466 yards and two touchdowns.

The Patriots trailed 28-3 with less than three minutes remaining in the third quarter before staging a historic comeback. A 1-yard run by White with 57 seconds remaining (plus a two-point conversion by Danny Amendola) sent the game to overtime, and Brady marched the Patriots right down the field to win the franchise’s fifth championship since 2002.

End of regulation, 28-28: The Falcons’ final drive of the fourth quarter went nowhere. We’re headed to overtime for the first time in Super Bowl history.

The Patriots won the coin toss and will receive. — Z.C.

We aren’t even going to explain how the Patriots scored because if you’re not watching this game, you don’t deserve to know.

Fourth quarter, 2:00, Falcons 28-20: Did we just say Julio Jones had the best catch of Super Bowl LI? We spoke too soon.

Fourth quarter, 3:31, Falcons 28-20: Atlanta nearly was able to put a nail in New England’s coffin thanks to a 39-yard catch-and-run by Devonta Freeman and a truly incredible catch by Julio Jones.

But a Trey Flowers sack and a Falcons holding penalty set up a third-and-33 from the Patriots’ 45-yard line, and Ryan threw incomplete, forcing Atlanta to punt.

The Patriots take over with a chance to tie the game. But first, do yourself a favor and take a look at Jones’ catch. It’s easily the highlight of his remarkable Super Bowl debut. — Z.C.

Tom Brady found Malcolm Mitchell just beyond the first-down marker on third-and-11, then hit Danny Amendola on an out pattern for a 6-yard touchdown pass. LeGarrette Blount plowed his way into the end zone on the two-point conversion, and the Patriots now trail by just eight points with nearly six minutes left to play.

Dont’a Hightower hit Matt Ryan’s arm as he threw, forcing a fumble. Alan Branch recovered for the Patriots’ first takeaway of the game.

Completions to Malcolm Mitchell (three catches, 40 yards) and Martellus Bennett (one catch, 25 yards) brought the Patriots to the Falcons’ 7-yard line, but Grady Jarrett sacked Brady on two of the next three plays, forcing the Pats to settle for another Stephen Gostkowski field goal.

Jarrett, who now has three sacks tonight, should be in the conversation for Super Bowl MVP, though that honor likely will go to Falcons quarterback Matt Ryan. — Zack Cox

End third quarter, Falcons 28-9: The Patriots forced a three-and-out, with the help of a Falcons holding penalty, and are awaiting the punt.

They scored on a 5-yard completion from Brady to James White, but the extra point was no good.

The Falcons drive down for another score. Their drive ended with a 6-yard swing pass to Tevin Coleman with Rob Ninkovich in coverage.

It would take about four miracles for the Patriots to win in 23 minutes and 31 seconds.

Good news: They only took 16 seconds off the clock, and the Falcons have the ball on their own 15-yard line.

Third quarter, 13:01, Falcons 21-3: The Patriots forced a three and out after Dont’a Hightower stuffed Devonta Freeman for a 3-yard loss on first down. Freeman caught a 7-yard pass on second down, then cornerback Eric Rowe broke up a pass intended for Taylor Gabriel on third down.

The Patriots have the ball on their own 47-yard line after the punt and a 26-yard return by Julian Edelman.

End half, Falcons 21-3: The Falcons fell on the kickoff to end the half. Brady is 15 of 25 for 179 yards with an interception. He’s looked off all half, however.

The Patriots have just 14 carries for 35 yards so far, while the Falcons have nine carries for 86 yards. Matt Ryan is 7 of 8 for 115 yards with a touchdown.

Second quarter, 0:02, Falcons 21-3: The Patriots put points on the board to end the half, but they still trail by three scores. Plus, the Falcons get the ball to start the second half.

This game is going as poorly as humanly possible for the Patriots. They’ll need turnovers and breaks to win.

Second quarter, 2:21, Falcons 21-0: The Patriots were about to put points on the board when Tom Brady threw to Danny Amendola into double coverage. It was picked off by Robert Alford and returned 82 yards for a touchdown.

This game is bonkers.

The Patriots let up plays of 24 and 18 yards before Matt Ryan found Austin Hooper in the end zone for a 19-yard touchdown over Patrick Chung.

Second quarter, 10:45, Falcons 7-0: The Patriots went three and out on an incompletion to James White, 3-yard run by Dion Lewis and 4-yard completion from Brady to White.

The Falcons have the ball on their own 38-yard line.

Second quarter, 12:15, Falcons 7-0: The Falcons took an early 7-0 lead on a 5-yard touchdown run by Devonta Freeman, who went untouched after Patriots defenders overpursued to the middle of the field.

The Falcons picked up big chunks of yards on consecutive 19-yard completions to Julio Jones. Freeman also had a 15-yard run on the drive.

Second quarter, 14:08: The Patriots were driving down the field before Falcons linebacker Deion Jones stripped New England running back LeGarrette Blount. The Falcons have the ball on their own 29-yard line.

End first quarter: No score after one quarter here in Houston. The Patriots still haven’t scored a touchdown in the first quarter of a Super Bowl under Bill Belichick.

First quarter, 1:36: The Patriots forced a punt on a third-down sack after allowing one first down.

Brady was sacked twice on the Patriots’ second drive. New England was forced to punt. The Falcons have the ball on their own 12-yard line.

First quarter, 10:28: The Patriots allowed a 37-yard run on their first defensive play then forced a punt on third down when Trey Flowers sacked Matt Ryan.

The Patriots have the ball on their own 10-yard line after Julian Edelman was swarmed on his punt return.

First quarter, 13:56: Tom Brady went 1 of 2 for 9 yards on completions and incompletions to Julian Edelman.

LeGarrette Blount ran for no gain on third down to force the three and out and punt. The Falcons have the ball on their own 8-yard line after a penalty on the punt return.

First quarter, 15:00: The Patriots called heads, and the coin toss, thrown by President George H.W. Bush, who was joined by his wife, Barbara, came up tails.

The Falcons chose to defer, so the Patriots will get the ball first.

Dion Lewis took the kick and downed it for a touchback.

Prior to kickoff, the Patriots and Falcons took the wrong sides of the field, so Lewis and Julian Edelman had to jog the length of the field.

6:04 p.m.: NFL Media’s Scott Hanson just came on the video board and conducted a pregame crowd noise test between Patriots fans and Falcons fans. The Patriots were clearly louder.

5:29 p.m.: Tom Brady, Jimmy Garoppolo and Jacoby Brissett took the field a little before 5:30 to more loud cheers. Brissett is in full uniform despite being inactive.

White, Lewis and Matthew Slater are back for kick returns. Edelman, Chung and Amendola are fielding punts.

4:58 p.m.: The Patriots’ inactives have been announced. They’re as projected.

The Patriots also plan to extend Tom Brady’s contract, because they expect him to play for three to five more years.

2:51 p.m.: The NESN crew has arrived to NRG Stadium for Super Bowl LI.

The stadium is decked out in the odd Super Bowl LI color scheme of teal, red, black and neon yellow.

1:30 p.m. ET: Super Bowl LI is still five hours away, and the media is abord a shuttle to NRG Stadium via police escort.

There?s little left to say or write about the game at this point that hasn?t already been expressed. It?s a matchup of two high-powered offenses, and the Patriots? defense is exponentially better than the Falcons?.

Here are some stories you should check out before the game. There?s plenty of time.

— Julian Edelman and Matthew Slater are as close as brothers as they enter their third Super Bowl together.

— Logan Ryan has a special jersey prepared for tonight.

— Brady has been leaning heavily on Julian Edelman and Chris Hogan lately.

— Tom Brady is on pace to never retire.

— The Patriots traditionally have started slow in Super Bowls. They’ll try to buck that trend.

The game will be played under a roof, so weather will not be a factor. The game kicks off at 6:30 p.m. ET on FOX. 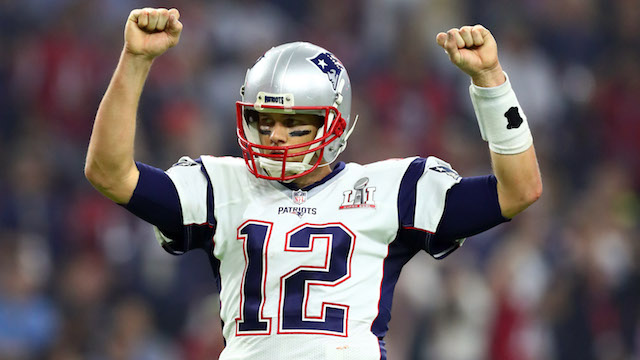 Tom Brady Is The Greatest QB Of All Time, And Anyone Who Says Otherwise Is Wrong 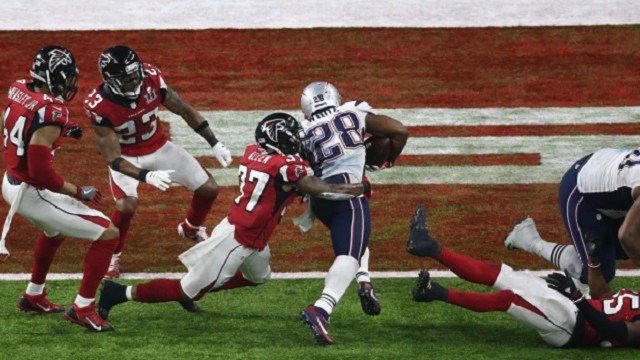