HOUSTON — The New England Patriots finished up their on-field practice preparations for Super Bowl LI with a light session Friday at the University of Houston.

It was a shorter practice than the previous two days, running about 90 minutes with the players running the drills at about half-speed and without shells or shoulder pads under their jerseys.

?We?re ready to go,? Patriots coach Bill Belichick declared. ?We?ve covered everything. With a little more than 48 hours to kickoff, we?ll finish off our meetings and stuff, but we?re done on the field.?

Belichick said there were no setbacks for the handful of players nursing minor injuries, and that Nate Ebner, the safety/special teams ace, continues to progress after entering concussion protocol following the AFC Championship Game.

The Patriots will visit NRG Stadium on Saturday, but merely to walk the field and get acclimated to the surroundings and take a team picture. Belichick said the team would not switch hotels for the night before the game for more seclusion, as he?s done with the Patriots and other teams have done on the eve of the Super Bowl in the past.

In fine-tuning strategy in the 48 hours before the game, Belichick said they will be prepared to make adjustments. He?s fully aware, if not concerned, that the Atlanta Falcons have scored touchdowns on their first possession in eight consecutive games.

?They are a fast-starting team, offensively,? Belichick said. ?So we?ve got to do a good job of making sure we know what we?re doing.?

?Tom?s pretty consistent,? he said. ?He?s been in these games and big games before. Each week is different, every defense is different, our plays are different, based on what the defenses are. But he?s not an up and down preparation guy. He?s consistent, and he was this week. He had a good week.?

If there?s a theme that Belichick wants to convey to his team in the hours before the game, it begins with continuing the patterns that have allowed the team to advance to the brink of a championship.

For the third day in a row, the Patriots serenaded a teammate in celebrating a birthday to cap off their team huddle at the beginning of practice. On Wednesday, it was linebacker Rob Ninkovich. On Thursday, defensive tackle Malcolm Brown drew the attention. On Friday, running back James White was feted.

Belichick noted the coincidence of having so many birthdays strung together.

?Must have been something going on nine months ago, in those years,? Belichick said.

The coach lauded the facilities where the Patriots worked. Coincidentally, an assist came from the father of a member of Belichick?s coaching staff. Receivers coach Chad O?Shea?s father, Mike, is the head athletic trainer for the University of Houston Cougars football team.

?Mike?s done a great job of helping us get set up,? Belichick said. 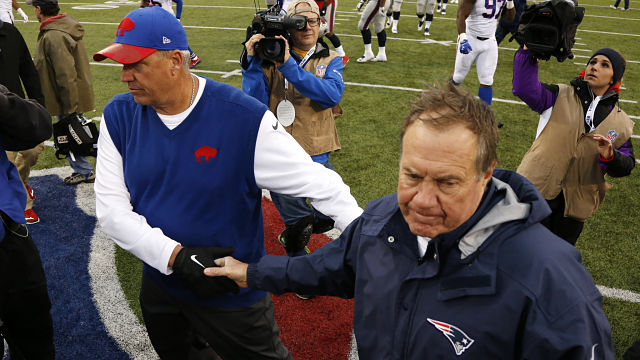