Patriots Are More Likely To Draft These Offensive Players After Combine - NESN.com Skip to content

Mock the NFL Scouting Combine as the “underwear Olympics” all you want, but the New England Patriots definitely take stock in the event broadcast every winter on NFL Network.

The Patriots have a type, based on testing measurables, at every position. They’re more obvious at some than others, but it’s easy to spot a pattern when looking at players drafted at each position as a whole. For example, the Patriots generally draft running backs, wide receivers and cornerbacks who run above average 3-cone drills. They prefer speedy wide receivers and cornerbacks, defensive linemen with explosion and tight ends with lateral quickness.

Based on what we’ve perceived based on the Patriots’ draft history, New England is more likely to draft these players after offensive players ran through their combine drills.

Both Howard and Engram check nearly every single box for a Patriots tight end. Both are undersized based on their weight, Howard’s vertical isn’t up to snuff, and Engram didn’t put up as many bench press reps as a typical Patriots drafted tight end.

But both players have the height, length, hand size, speed, explosion, agility and lateral quickness that the Patriots usually look for. The Patriots are most stingy when it comes to the short shuttle at tight end. Only Howard, Engram and Florida International’s Jonnu Smith meet their typical standard in the drill.

Finding running backs to project to the Patriots is exceedingly difficult. They must fumble infrequently and run a 3-cone drill at or below 7 seconds with an above average short shuttle.

There’s a problem. Many running backs, like Carson listed above, don’t run the 3-cone and short shuttle at the combine.

Carson met the Patriots’ other standards while fumbling once every 121.5 touches in college.

McCaffrey fumbled once every 205.25 touches and ran a blazing 6.57-second 3-cone. He’s not as big as most Patriots running backs and his 4.22-second short shuttle barely missed the mark.

Ogunbowale didn’t fumble in college and ran a 6.99-second 3-cone, which was enough to make our list.

We’ll wait impatiently for Toledo’s Kareem Hunt to run the 3-cone at his pro day. We’ll also keep an eye on Wyoming’s Brian Hill, who ran a 7.03-second 3-cone.

The Patriots like their wide receivers to be fast, agile and explosive. It’s a position in which they put a lot of stock in well-rounded athleticism.

Jones aced the combine with a 4.45-second 40, 6.79-second 3-cone and spectacular leaping numbers. He’s a slot receiver, and the Patriots would be smart to look for a young player to eventually plug into that role.

Davis perhaps did more to raise his draft stock than anyone who’s competed in the combine thus far with 4.44-second 40, 6.82-second 3-cone, 41-inch vertical leap and 11-foot, 4-inch broad jump. He’ll enter the NFL as one of its elite athletes.

The Patriots have typically drafted offensive tackles with top-tier vertical leap results. Moton checked every box for the Patriots other than his 23 bench reps.

Garcia isn’t as agile as most Patriots offensive tackles, but he has the speed and explosion they usually desire.

The Patriots could look to draft a swing tackle to play behind starters Nate Solder and Marcus Cannon.

It seems unlikely the Patriots will draft a guard, but Feeney checks every mark, so he’s worth noting.

The Patriots could take a center if they want to give David Andrews some competition. Fuller has the Patriots’ desired size and moved well in the 3-cone, which typically bodes well for an offensive lineman’s pulling ability.

LSU’s Chase Pocic and Wyoming’s Chase Roullier are two other players the Patriots could look at.

The Patriots won’t draft a quarterback unless they trade one of theirs. All four of these players check every box that the Patriots typically look for from a measurable and testing standpoint. So, if they do draft one, it very well could be one of these four players. 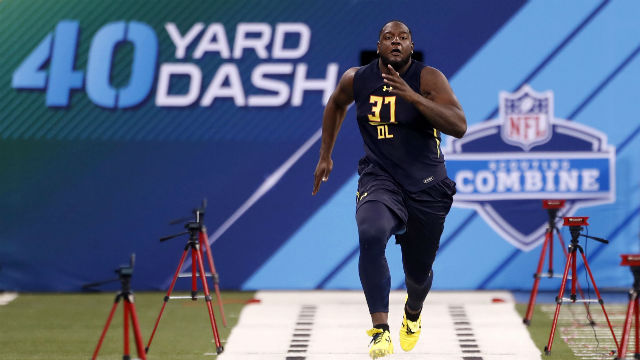