BOSTON — After two blowout defeats in Washington, the Celtics responded in a big way Wednesday night with a convincing 123-101 win over the Wizards in Game 5 at TD Garden.

Avery Bradley had one of his best games in a Celtics uniform. The veteran guard led all scorers with 29 points to go along with six rebounds and three assists. Al Horford (19 points), Jae Crowder (18 points) and Isaiah Thomas (18 points) also had strong nights for Boston.

Washington struggled to find a rhythm on offense all night. John Wall still impressed, though, with 21 points, while Bradley Beal posted 16. Still, it wasn’t nearly enough to threaten the Celtics at any point throughout Wednesday’s contest.

With the win, the Celtics take a 3-2 lead in the teams’ Eastern Conference semifinal series.

ROLES REVERSED
After being victims of lengthy Wizards runs in the first four games of the series, the Celtics went on a run of their own to start Game 5. Thanks to a 16-0 run in the early stages of the first quarter, Boston grabbed a 33-21 lead after the first 12 minutes.

Though he entered the contest dealing with a hip-pointer, Bradley clearly wasn’t fazed by the injury. The Celtics guard led all scorers with 14 first-quarter points to go along with three rebounds and two assists. Beal paced the Wizards with six points.

Boston’s offense was extremely efficient early on, shooting 65 percent from the floor. Washington, on the other hand, struggled mightily to the tune of a 34 percent shooting mark. The Wizards’ shooting woes kickstarted the Celtics’ transition offense, which experienced great success in the paint in the first quarter.

THOMAS OFF, BUT C’S ON
Thomas typically paces the Celtics’ offense, but the star guard had a quiet first half. IT scored only five points through the first two quarters, posting a 1-for-4 line from the field. But even with Thomas quiet, the C’s continued to roll and took a 67-51 lead into the break.

Bradley carried on his red-hot offense from the first quarter, scoring 11 points in the second frame. Crowder also had a loud second quarter with 10 points, while Horford added six of his own. The 3-pointer was working for the Celtics in the first half, as they buried eight of 14 shots from beyond the arc.

Wall finally started to wake up for the Wizards. After scoring two points in the first quarter, the Washington point guard contributed 12 in the second. He and Beal (10 points) were the only Wizards to score in double figures in the first half.

FOOT ON THE GAS
There was no let-up for the Celtics to start the second half, as Boston continued to surge and held a 93-76 lead heading into the fourth quarter. Horford carried the Celtics in the third quarter, scoring eight points to go along with three rebounds and three assists. Washington’s struggles from beyond the arc plagued its offense. The Wizards only converted on five of 18 3-point attempts, thwarting any offensive pace and allowing the C’s to run in transition.

Boston’s offense continued to be balanced, as it dished out 28 assists through three quarters compared to Washington’s 16.

STRONG RESPONSE
With the huge lead intact, the C’s dove deep into their bench for a large portion of the fourth quarter. And even with the starters on the sidelines, the C’s had no problem cruising to a dominant Game 5 victory.

The Celtics were handed demoralizing defeats in Games 3 and 4 in Washington, but Game 5 shifted the momentum of the series entirely back in Boston’s direction. The Wizards didn’t legitimately threaten the Celtics at any point Friday night, as the C’s played arguably their most complete game of the series. Boston’s offense was well-balanced, and its defense was stingy, prohibiting Washington from getting anything going.

PLAY OF THE GAME
What a save by Jaylen Brown.

UP NEXT
The series now shifts back to the nation’s capital for Game 6 on Friday. Tip-off from Verizon Center is set for 8 p.m. ET. 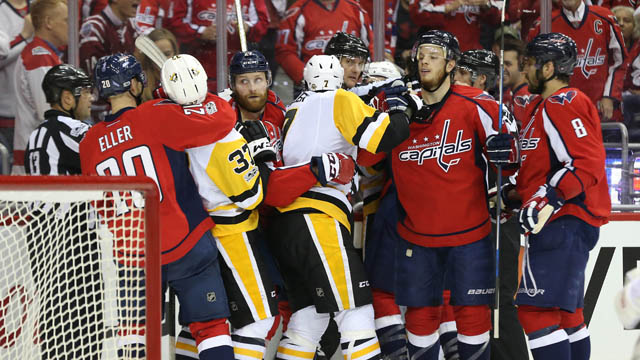 Capitals’ Season Ends In Heartbreak (Again) With Loss Vs. Penguins In Game 7 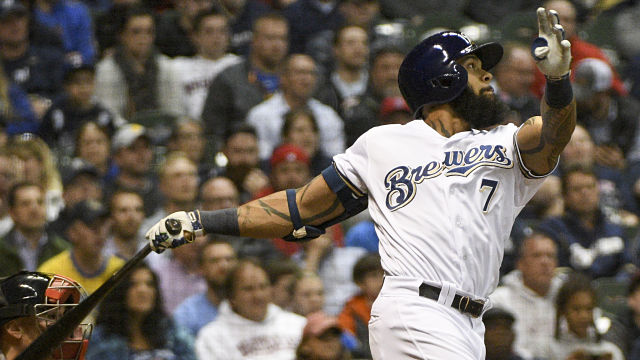