Now that the Boston Celtics have traded the No. 1 overall pick to the Philadelphia 76ers, it’s pretty clear Markelle Fultz will be the top selection in the 2017 NBA Draft. But the rest of the draft board seems to be in flux, especially with all the trade rumors going around.

One of the other top prospects is former Kansas forward Josh Jackson, and both the New York Knicks and Chicago Bulls are interested in him, sources told ESPN’s Ramona Shelburne. However, the Knicks currently own the No. 8 pick, while the Bulls don’t draft until the No. 16 spot, so both teams likely would need to strike a deal to move up.

Both the Bulls and Knicks are linked to other trade rumors, though, so such a trade could be possible. Chicago reportedly is looking at deals for All-Star Jimmy Butler, while New York reportedly is fielding offers for one of the best young players in the league, Kristaps Porzingis.

The Los Angeles Lakers currently own the No. 2 spot, and they reportedly have been in trade talks with the Indiana Pacers for superstar Paul George. So, both of those teams could be wild cards when it comes to Jackson.

And the C’s also are a team linked to Porzingis trade rumors.

Phew. Got all that? You have to love the NBA offseason. 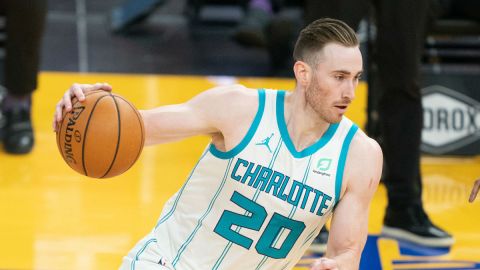