The Golden State Warriors are back home for Game 5 of the 2017 NBA Finals at Oracle Arena, where they can eliminate the Cleveland Cavaliers and win their second championship in three seasons.

But the defending champs won’t go down without a fight, and that was evident in Cleveland’s Game 4 win led by LeBron James and Kyrie Irving. The Warriors haven’t lost on their homecourt in the playoffs, though. They are 8-0 in front of their home fans, including two blowout victories over the Cavs to begin this series.

So, will the Warriors be crowned champions and become one of the best team’s in league history, or will the Cavs push them to a Game 6 back in Cleveland?

Keep it right here for score updates, highlights and analysis of Game 5 with our live blog.

The Warriors are NBA champions for the fifth time in team history. They finish the playoffs with a remarkable 16-1 record. It’s also their second title in three seasons.

Kevin Durant is the NBA Finals MVP. He’s a champion for the first time.

Let’s not forget about Cavs superstar LeBron James, who averaged a triple-double in a losing effort.

Fourth quarter, 3:29 122-110 Warriors: Oh look, another Warriors player wide open for an easy layup under the basket. This probably has happened five or six times in this game.

Durant to Curry for the wide open layup. pic.twitter.com/gkw2sGNFgU

Fourth quarter, 5:01 118-106 Warriors: Kevin Durant just drove past Kyle Korver for an easy layup. The Warriors now lead by 12, and it would be shocking, at this point, if the Cavs came back and won.

Steph finds Iguodala for the dunk on the no look pass. pic.twitter.com/nWXzdGB6vE

Fourth quarter, 8:05 108-102 Warriors: Kyle Korver, who’s shot poorly in the series, hits from beyond the arc and the Golden State lead is back to six.

Kevin Durant steps back for 3. pic.twitter.com/8NnNPQAkAx

Third quarter, 0:8, 98-93 Warriors: J.R. Smith now is 5-for-5 on 3-point shots, all of which have been contested. His fifth of the game helped the Cavs trim the deficit to five entering the final quarter.

Kevin Durant has joined Michael Jordan and Shaquille O'Neal as the only players to score 25+ points in each of their first 10 Finals games.

Third quarter, 3:18, 93-86 Warriors: Kevin Durant came down and hit a clutch 3-point shot to increase Golden State’s advantage. He now has 28 points on 9-for-13 shooting.

Third quarter, 3:56, 90-84 Warriors: LeBron James made this tough shot and got fouled, but he missed the free throw attempt. He’s missed six foul shots in this game.

LeBron hits the and-1 bouncing off Curry. pic.twitter.com/nCzojqfOrm

LeBron with the offensive rebound and put back. pic.twitter.com/hX2q2a4VyZ

Klay with two triples in the second half.@warriors on top of @cavs on #NBAonABC pic.twitter.com/AJ4rpSQtKk

Second quarter, 0:58, 68-52 Warriors: The Warriors still are feeling it offensively. Andre Iguodala has played fantastic at both ends of the floor off the bench, too.

Curry to Draymond to Iguodala. pic.twitter.com/xQeRIktdmD

Second quarter, 3:08, 60-45 Warriors: Another 3-point shot by Kevin Durant grows Golden State’s lead. At the other end of the floor, a little scrum between Tristan Thompson, J.R. Smith and David West resulted in a few technical fouls.

David West and Tristan Thompson need to be separated. pic.twitter.com/LxXhaq3hWL

Second quarter, 4:47, 54-43 Warriors: Stephen Curry hits a floater and is fouled, in foolish fashion, by Tristan Thompson. The Warriors are on fire right now.

Curry with the and-1 floater. pic.twitter.com/l9SqEYuvrc

Durant hits the 3 with LeBron on him close. pic.twitter.com/CMcK9gCLNi

The Cavs also have nine turnovers.

Cavs have scored just once on their last 8 possessions. 12-2 GSW run.

Andre Iguodala with the big smash with LeBron getting out of the way. pic.twitter.com/kbIa84R46c

Second quarter, 10:14, 41-33 Cavs: LeBron James got hit in the face and still threw down a vicious dunk on Kevin Durant. It should have been Durant’s third foul but no call was made. James already has 16 points, three rebounds, two assists and two steals.

LeBron James and Kyrie Irving lead the Cavs with 12 points each. Stephen Curry leads the Warriors with 12.

The Cavs have shot 62 percent from the floor in the quarter.

First quarter, 2:50, 28-25 Cavs: Kyrie Irving with an Allen Iverson-like crossover and finish at the rim to extend Cleveland’s lead.

First quarter, 5:30, 22-16 Cavs: Klay Thompson now has two quick fouls, which is bad news for the Warriors because he’s the main defender on Kyrie Irving. Andre Iguodala and Shaun Livingston have checked in off the Golden State bench.

The hot start continues for LeBron James. He's up to 12 points. #NBAFinals on #NBAonABC pic.twitter.com/55QsfxC61I

First quarter, 8:44, 13-9 Cavs: A 9-0 run for the Cavs, led by a 3-point play by LeBron James and a sweet layup by Kyrie Irving, has forced a timeout by Golden State coach Steve Kerr. James is 3-for-3 from the field with seven points in three minutes.

Kyrie & LeBron trade tough finishes! @cavs are on a 9-0 run on #NBAonABC. pic.twitter.com/ODcnt9B7Eu

First quarter, 9:40, 9-4 Warriors: Klay Thompson and Draymond Green each have hit a 3-point shot as the Warriors are hot from the field early.

9 p.m.: Here are the starting lineups.

Snoop and E-40 sitting court side

Green Bay Packers quarterback Aaron Rodgers is in attendance, too. 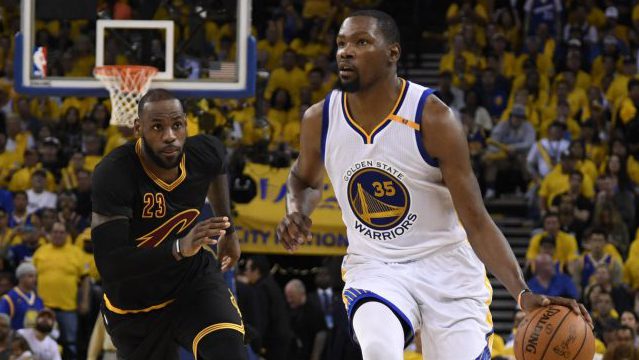 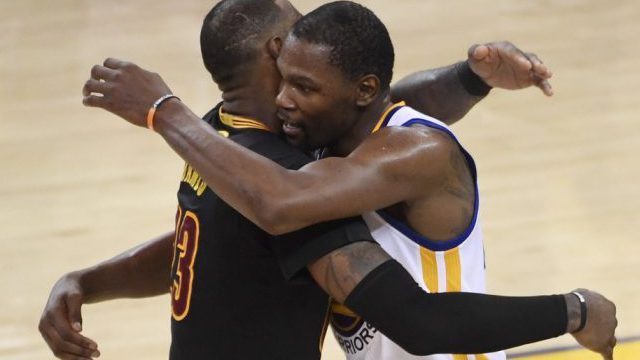