In case you’ve been living under a rock and haven’t been following the NBA’s incredibly wild offseason, the Cleveland Cavaliers are in turmoil.

LeBron James, amid rumors of him potentially heading West as a free agent next summer, hasn’t publicly pledged his future to the Cavs beyond next season. The team went without a general manager for nearly all of free agency after not renewing David Griffin’s contract, and a potential trade for former Indiana Pacers superstar Paul George fell apart.

The most recent, and perhaps most devastating development for the Cavaliers is superstar guard Kyrie Irving’s trade request. Irving reportedly no longer wants to play with James, and the four-time league MVP reportedly was “blindsided” by his teammate’s trade demand.

The Boston Celtics have been labeled by many basketball experts as the heir apparent to the Cavs in the East, and they would have a tremendous chance to beat Cleveland in next season’s playoffs if Irving was traded, and there are a couple reasons why.

The first is the simple fact the Celtics have made substantial upgrades this offseason and the Cavaliers have not. Here’s a look at the notable moves made by each team.

The Celtics added an All-Star swingman in Hayward, rebounding and toughness with Morris and Baynes, and a potential go-to scorer in Tatum who strengthens the bench. All the Cavs have acquired is an average point guard in Calderon and a below-average forward in Green. They also went deeper into the luxury to re-sign Korver, who was a disappointment after being brought in at the trade deadline last season.

Irving has played well against the Celtics throughout his career. He’s averaged more than 20 points per game in his regular season and playoff career versus Boston.

And remember his 42-point outburst to save the Cavs when the Celtics looked poised to tie the 2017 Eastern Conference finals at two games apiece? Irving, overall, is an elite playoff performer who’s averaged 25-plus points and 40 percent shooting from 3-point range over the last two postseason runs.

It’s also hard to imagine the Cavs being able to acquire a great return for Irving despite his immense talent. Why? Look at the four teams he reportedly prefers to go to — the Minnesota Timberwolves, San Antonio Spurs, New York Knicks and Miami Heat.

Unless the Cavs were to acquire Karl-Anthony Towns from the T-Wolves, Kristaps Porzingis from the Knicks or Kawhi Leonard from the Spurs, their roster would be weakened — and quite possibly severely weakened — by trading Irving.

Jimmy Butler, like Irving, is an elite player with two more years left on his contract, and the Chicago Bulls still got very little from the Timberwolves in return for him in their draft day trade.

The Cavs could begin the 2018-19 season without James or Irving. Such a scenario would make the Celtics the favorites to win the East, but Boston’s wait to become the conference’s top team could come even sooner if Cleveland grants Irving’s reported request.

Without Irving’s scoring and playoff pedigree, the Cavs, even with James still in the fold, would have to fight tooth and nail to reach a fourth straight NBA Finals.

Rick Porcello Pays For Few Mistakes He Makes In Tough-Luck Loss Vs. Angels 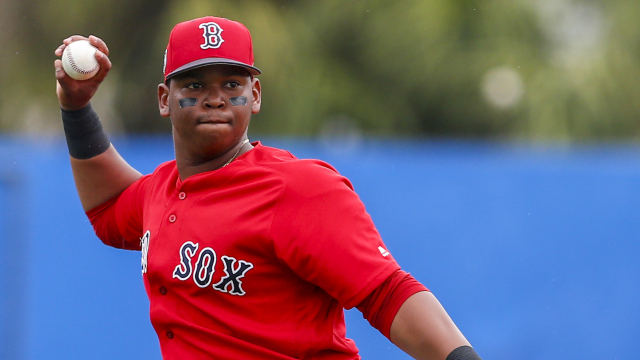